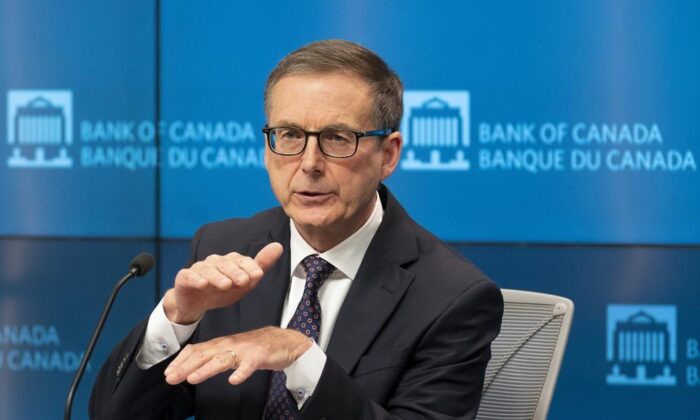 Bank of Canada Governor Tiff Macklem speaks at a news conference in Ottawa on Oct. 27, 2021. (The Canadian Press/Adrian Wyld)
Economy

US Recession Fears Mount as Stocks Swoon, but What of Canada?

Rapidly rising interest rates have economists, business leaders, and financial markets increasingly fearing a recession in the United States next year as stock markets plunge, while Canada’s economy is facing a similar dynamic but with greater vulnerability to its central bank, an economist says.

“There are many recessions in the past that were triggered or helped or caused by a monetary policy error in which central bankers raised interest rates too quickly,” Benjamin Tal, CIBC’s deputy chief economist, told The Epoch Times.

Concerns over global economic growth are surfacing amid elevated inflation and persistent supply-chain bottlenecks. Both the Bank of Canada and the U.S. Federal Reserve are bent on taming inflation by hiking interest rates to dampen demand. But the supply side has been additionally compromised by Russia’s invasion of Ukraine, whose effects are beyond central bankers’ control.

The prevailing worry is that central banks won’t be able to secure a “soft landing” and avoid a recession, defined as two straight quarters of negative economic growth.

Tal explained that inflation is a lagging indicator—it describes what happened in the past—and the problem with central banks fighting inflation is that they raise rates in real time and run the risk of overdoing it, which can only be assessed in retrospect.

Where inflation stands in the late summer and fall is critical, Tal noted.

“Are they [Bank of Canada] going to continue to raise interest rates, risking overshooting, and therefore [create] a recession or not? And I suggest they will, and therefore if you told me that inflation in August, September was still very elevated, I would raise the probability of recession in 2023 higher,” Tal said.

Economists forecast a slowing Canadian economy in 2023 but one that is still growing. For example, Oxford Economics on May 12 forecasted gross domestic product (GDP) rising 4.1 percent in 2022 before slowing to 2.2 percent in 2023.

All Eyes on the Consumer

How rapidly the Bank of Canada raises rates and to what ultimate level is a topic of hot debate.

“Ironically, the tiny Bank of Canada is more powerful than the Fed when it comes to the effectiveness of monetary policy,” Tal said, noting that Canadians are more heavily indebted and therefore more sensitive to rising rates, and that Canadian mortgages are typically for five years or less, whereas in the United States they are often for 30 years.

“So monetary policy is more effective in Canada, which means that you don’t need to raise as much in Canada to get the same damage.”

Consumer spending is the biggest component of GDP, and RBC says that as interest rates rise—with the Bay Street bank’s expectations for the overnight rate of 2 percent by October—borrowing costs for the average Canadian household will rise by almost $2,000 in 2023.

“This will erode spending power, especially for the lowest-earning fifth of households which spend 22 percent of their after-tax income on debt servicing (including mortgage principal and interest payments),” RBC said on April 27.

JPMorgan CEO Speaks of ‘Big Storm Clouds’ Over US Economy

US Stocks Leading the Global Market Selloff in 2022

“The challenge for the Bank of Canada at this point in the economic cycle is to hike interest rates enough to rein in prices, relieving pressure on Canadians, without sparking a downturn. That will be no easy task.”

One of the unusual dynamics during the pandemic was the elevated level of savings for Canadians due to generous government support programs. But the opposing force is that wages are not rising as fast as inflation is, especially for lower-income Canadians, Tal says.

“The Canadian consumer’s about 60 to 65 percent … of the economy, so wherever the consumer goes, the economy will follow,” Tal said.

The Conference Board of Canada’s consumer confidence survey in May saw its largest drop since the onset of the pandemic.

U.S. stocks have seen a steady decline over several weeks, unlike the 2020 lockdown recession where the stock market drop was extremely steep and sudden.

When the stock market losses pile up, people feel less rich and can end up spending less.

With the week ending May 20, the S&P 500 had fallen for the seventh straight week for the first time since the 2001 dot com bubble burst and briefly dipped into bear-market territory—a 20 percent decline from its peak.

BMO senior economist Robert Kavcic pointed to consumer discretionary stocks being the worst-performing sector of the S&P 500 this year, down 32 percent as of May 20.

The accompanying moves reflected a race to safe-haven assets, with bonds gaining in value and the U.S. dollar strengthening to levels not seen since 2002. Bitcoin also hit an intraday low, trading at late-2020 levels before rebounding.

Deutsche Bank’s head of thematic research Jim Reid says that there hasn’t been one particular driver for the loss and that he believes the United States will fall into a recession in 2023.

Financial markets began to price in fewer rate hikes over the next year by the Fed as stock market declines started to reflect concerns about global growth.

China’s growth scares can send shivers through financial markets and the global economy, and Reid said 2022 is increasingly looking like it will be the second-slowest year of growth in that country since 1976. Deutsche Bank’s China economists lowered their 2022 growth forecast from 4.4 percent to 3.3 percent, Reid reported on May 19.

But Canadian stocks, with their focus on the energy and financial sectors, have been consistently outperforming the broad gauge of U.S. stocks in the S&P 500 over the last year, year-to-date, three months, and one month. Year-to-date, the Toronto Stock Exchange index is down 4.4 percent, while the S&P 500 is down 17.3 percent, as of May 24.

“[It’s] very difficult to believe that if the U.S. goes into a recession, we [Canada] will be able to avoid it,” Tal said.