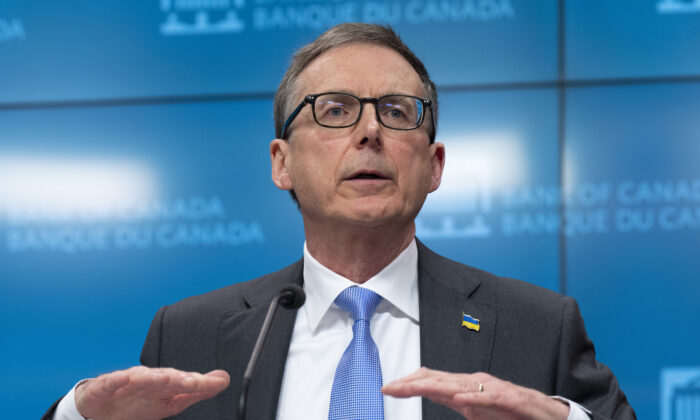 OTTAWA—With an outsized rate hike, the Bank of Canada sent a clear message on April 13 that it’s aiming to get inflation under control. Economists say interest rates could rise by at least another full percentage point by year-end, which poses its own risks and uncertainties for the economy.

In two widely anticipated moves, the BoC raised its key rate from 0.50 percent to 1 percent and announced an end to its government bond-buying program. The bank has not raised rates by 50 basis points—a basis point is one one-hundredth of a percentage point—in a single announcement since 2000.

Just two of the signs indicating that the Canadian economy is overheating are the annual consumer price index (CPI) inflation rate and the unemployment rate. February’s inflation rate came in at 5.7 percent and inflation has now been above the 3 percent upper limit of the BoC’s target range since April 2021. And the 5.3 percent unemployment rate for March is the lowest on record since comparable Statistics Canada data became available in 1976.

“Inflation is too high. It is higher than we expected, and it’s going to be elevated for longer than we previously thought,” Bank of Canada Governor Tiff Macklem said in his opening statement at a press conference. He added that the economy has “fully recovered from the pandemic, and it is now moving into excess demand.”

Financial markets have been anticipating a series of rate hikes for a few months now, but the central bank’s tone on inflation has turned markedly more hawkish.

RBC senior economist Josh Nye said in a note to clients that the announcement “suggests the BoC has lost the patience it demonstrated back in January when it took a pass on raising rates.”

Bank of Canada Signals Readiness for Series of Rate Hikes

“Our forecast assumes more standard, 25 bp hikes going forward—until the overnight rate hits 2 percent in October—though we think another 50 bp increase will be an option on the table in June,” he added.

That half a percentage point hike would be a possibility, Nye said, if, for example, the unemployment rate dropped to 5 percent or lower.

The concern for Canada’s highly indebted economy is rates rising too quickly, and University of Waterloo economics professor and former BoC assistant chief economist Jean-Paul Lam says the bank will carefully watch how consumer spending and home prices are reacting.

Lam also raised the possibility of stagflation, in which inflation remains persistently high while the economy either doesn’t grow or falls into recession.

“We could have higher rates slowing down the economy, especially consumption growth, but inflation remaining stubbornly high if it continues to be driven by disruptions in supply chains, … the war in Ukraine, and disruptions in the labour market due to COVID and wage growth accelerating,” he told The Epoch Times.

“Uncertainty on these topics [sensitivity of the Canadian economy to higher interest rates and an end to bond buying] is high in part because interest rates have been so low for so long, and because central banks have not held such quantities of bonds before,” states the C.D. Howe Institute’s Monetary Policy Council.

Where Does It End?

“With the economy moving into excess demand and inflation persisting well above target, the Governing Council judges that interest rates will need to rise further,” the Bank of Canada said in its interest rate decision statement.

As the bank forges ahead with its rate hikes, the question becomes, where does it end? As Macklem explained at the press conference, Canadians should expect rates to continue to rise toward “more normal settings,” until they reach what the BoC considers a “neutral rate of interest”—a theoretical and unobservable estimated rate that “neither stimulates nor weighs on the economy.”

The BoC raised its estimate of the neutral rate to a range of 2 percent to 3 percent, 0.25 percentage points higher than its assessment in April 2021. The upgrade generally reflects a stronger economy now than pre-pandemic and a correspondingly higher estimated U.S. neutral rate.

“The higher neutral rate was the most intriguing development in today’s decision and introduces new upward risks to terminal rate forecasts. We continue to look for a 2.50 percent terminal rate, with another 50 bps hike expected in June,” said TD Securities in a note to clients.

Lam foresees an aggressive schedule of rate hikes on the horizon.

“Given the estimates of the neutral rate as well, they have maybe 100 to 150 basis points to go until the end of the year,” he said.

“They will try to frontload as much as possible rather than play the wait-and-see game that they’ve done in the past year. I think they realize that they’re now behind the curve and they need to do some catch-up.”

The central bank revised its inflation outlook higher from its last set of quarterly forecasts in January, saying in its quarterly monetary policy report that the upward revisions to inflation “are primarily related to the consequences of the invasion of Ukraine, which has driven up commodity prices and exacerbated supply disruptions.”

The bank said impacts of the war are adding 0.7 percentage points to Canada’s CPI inflation in 2022, factoring in higher commodity prices and production costs along with more persistent supply chain disruptions.

The central bank also warned of a growing risk that expectations for higher inflation could become entrenched as firms raise prices in response to higher demand and supply constraints.

Macklem defended the actions taken by the bank and the feds at the start of the pandemic to plant the seeds of the recovery. Inflation had fallen well below the 2 percent target at the time, and government spending and the BoC’s interest rate cuts and bond buying were tools used to boost demand and the level of prices.

The governor said Budget 2022’s additional spending measures were not incorporated in the bank’s forecasts in the April monetary policy report.

“That is certainly a positive impulse [to inflation], but it is not on a scale that would materially affect our projections,” Macklem said in response to a question from The Epoch Times.