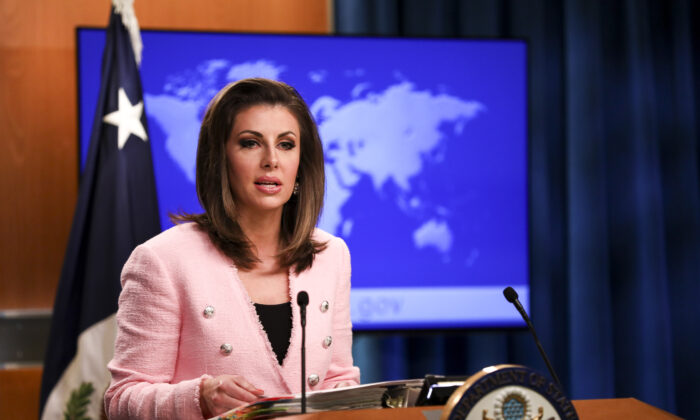 U.S. government officials and spokespersons are becoming more vocal in addressing an aggressive disinformation push by the Chinese communist regime—in some cases responding directly to Beijing officials and debunking their propaganda in real time.

Social media platforms such as Twitter are major tools being utilized by the Chinese Communist Party (CCP) as part of its global campaign to manipulate the narrative surrounding the pandemic. A considerable number of Chinese diplomats are actively pushing state-sanctioned narratives on these platforms and U.S. officials are ramping up their response.

Morgan Ortagus, a State Department spokesperson, has called out Beijing’s disinformation and responded directly to CCP officials. Federal agencies in the United States, meanwhile, are also ramping up efforts on this front by setting up new websites that separate fact from fiction.

In a March 26 Twitter post Ortagus said that “Propaganda outlets that report to the Chinese Communist Party are foreign agents, not ‘journalists.’ Even General Secretary Xi says they ‘must speak for the Party.'” Ortagus was responding to a post by Hua Chunying, a Chinese foreign Ministry Spokesperson, and Director General in the Department of Information.

Ortagus has responded to and debunked posts by Chunying in multiple occasions. In a separate post, Chunying claimed China has treated the CCP virus as a “highly pathogenic virus according to law.” Chunying also called out the World Health Organization stating that Beijing identified the pathogen in “record short time” and “shared genetic sequence with the world.”

“Nonsense. You call it ‘highly pathogenic’ now, but last month your officials blocked a WHO report from calling #COVID19 a ‘dangerous pathogen’ … #CovidCoverup #ChinaTransparencyNow,” Ortagus wrote in a March 22 response.

“Fact check: The Chinese government didn’t share the genetic sequence until after a professor in Shanghai did so on his own,” she continued. “The next day, your government shut down his lab for ‘rectification.’ #CovidCoverup #ChinaTransparencyNow.”

Secretary of state Mike Pompeo has boosted efforts to address the Chinese regime’s disinformation on his official Twitter account as well. In a short March 20 video message posted on his Twitter, Pompeo called out the CCP and other countries attempting to sow discord.

“Disinformation is coming from random actors around the world but often too coming from places like the Chinese Communist Party, Russia, Iran,” he said. “Those are nations that want to undermine what we’re doing here our democracy our freedom, the way we are responding to this risk … they want to undermine our activities.”

Internal government documents obtained by The Epoch Times have highlighted how the regime bungled its data tracking and censored discussions of the outbreak, fueling the spread of the disease.

Although the narratives pushed by the CCP can change quickly, the goals are the same: to defect responsibility over their botched handling of the CCP virus and to portray an image that they have successfully contained the outbreak.

The National Security Council is also responding to the disinformation, writing on its Twitter on March 15: “Text message rumors of a national #quarantine are FAKE. There is no national lockdown.”

Brendan Carr, a commissioner of the Federal Communications Commission (FCC) told The Epoch Times previously that it is “always appropriate to push back on communist propaganda” and said he himself responds to and debunks conspiracies pushed by CCP officials.

“I think taking a few seconds out of our day to do that while we focus on the fight that we have at hand, in terms of getting the pandemic under control in the United States—I think that that is the right move,” Carr said.