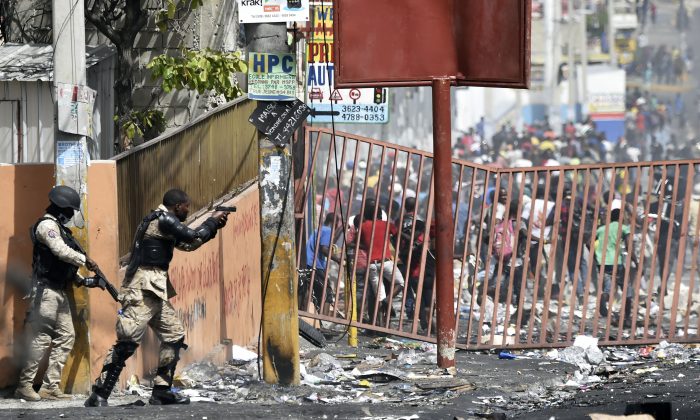 A member of the Haitian police points his gun at people to avoid looting in shops in Delmas, a commune near Port-au-Prince during protests against the rising price of fuel, on July 8, 2018. (Hector Retamal/AFP/Getty Images)
Americas

US Missionary Group Returns Home, Amid Violent Riots in Haiti

A missionary group of 13 Americans struggling to leave Haiti due to violent riots have managed to safely return back home despite many airlines being forced to cancel flights.

First, the group had to make it to the airport after a July 8 alert issued by the U.S. Embassy in Port-au-Prince, Haiti’s capital, warned Americans to “shelter in place” unless they’d confirmed their flights would be departing.

The missionaries, hailing from the Chapin United Methodist Church in South Carolina, made it to the airport in Port-au-Prince on July 9.

The protests stemmed from the government’s planned 38 percent increase in gas prices and 47 percent hike in diesel prices, announced on July 6. It was a bid for the government to generate more tax revenue.

Haitian Prime Minister Jack Guy Lafontant announced a temporary suspension of the fuel hikes just one day after it was announced, but the unrest continued. The protestors—made up of mostly youths—burnt cars, blocked roads, and looted stores.

On the evening of July 9, the missionary group arrived safely in Atlanta. The final stop was their church.

“The Chapin UMC Haiti team has made it to the ATL!! So very proud of them!! Jesus was glorified BIG TIME this past week through them!” lead minister Jody Flowers said in a statement. Flowers said the estimated time of arrival at their church would be around 12 a.m.

The Chapin UMC Haiti team has made it to the ATL!! So very proud of them!! Jesus was glorified BIG TIME this past week through them!! // ETA for their arrival in Chapin is 1130p/12a – ish… Will update again later.

Emily Wheaton, the group’s leader, said they were supposed to return July 7, but were forced to change plans.

“We just really played the waiting game all day yesterday. I think tensions were a little high around here yesterday. We’ve got a lot of teenagers here,” Wheaton told WYFF.

An estimated 100 Americans are still stuck in Haiti. Another missionary group, comprising members of the Woodland Community Church in Florida and the Glade Church in Tennesse, announced on July 9 that they were heading back.

A 2012 survey by the World Bank Group, found that more than 6 million out of 10.4 million Haitians (59 percent) were living below the national poverty line of $2.41 per day. Economic growth has also slowed to 1 percent.

Chapin church did not immediately respond to a request for comment.