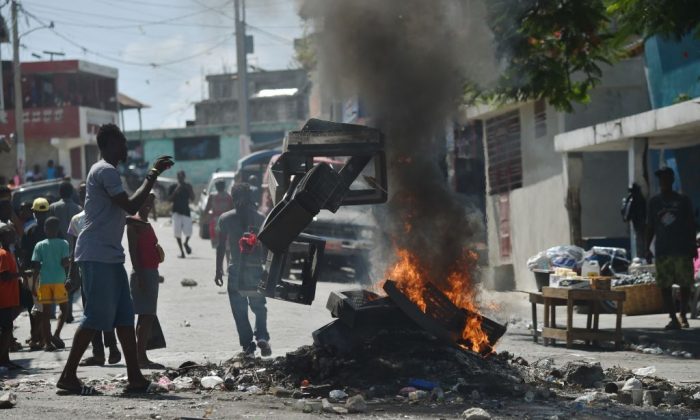 American citizens in Haiti are having difficulty leaving the impoverished country due to violent protests following a fuel price hike by the government.

A July 8 alert issued by the U.S. Embassy in Port-au-Prince, Haiti’s capital, warned its citizens to “shelter in place” and not to travel to the airport unless they’d confirmed their flights were still scheduled. The alert also warned that there was limited availability of food and beverages at the airport.

On July 6, Haiti’s Commerce and Economic ministries announced they would lower fuel subsidies in order to generate more tax revenue that would help fund government services. This translated to a 38 percent jump in price for gasoline and 47 percent for diesel, Reuters reported.

The fuel hike was made as part of an agreement with the International Monetary Fund, which required the country to instill measures that would boost government revenue and services, in a bid to re-strengthen the economy.

According to a 2012 survey by the World Bank Group, an international financial institution that provides loans to developing countries, more than 6 million out of 10.4 million Haitians (59 percent) were living below the national poverty line of $2.41 per day. Economic growth has also slowed to 1 percent.

On July 7, Prime Minister Jack Guy Lafontant announced a temporary suspension of the double-digit government hike, but the unrest continued.

The protestors—made up of mostly youths—used felled trees and boulders to block roads and set piles of tires alight, sending up thick clouds of black smoke. Burned cars could be seen across several areas in the capital, including in front of the Best Western and Oasis hotels in the hilltop suburb of Petion-Ville, as well as near the offices of telecommunications company Natcom.

Footage released by Haiti Information Project shows what appears to be thousands of anti-government protesters taking to the streets on the evening of July 8. According to the site, the protestors were demanding the resignation of Haitian President Jovenel Moise. In some areas, police used tear gas to try to disperse the unruly crowds.

“If you do decide to leave your residence or hotel to travel to the airport, pls exercise extreme caution,” the U.S. Embassy in Haiti warned on Twitter. “There are disruptions and roadblocks along both Routes National 1 & 2 entering into Port-au-Prince. Do not drive through roadblocks.”

If you do decide to leave your residence or hotel to travel to the airport, pls exercise extreme caution. There are disruptions and roadblocks along both Routes National 1 & 2 entering into Port-au-Prince. Do not drive through roadblocks. (2/3) pic.twitter.com/yT5XLmBhcT

More than 100 American missionaries remained trapped in Haiti as of the morning of July 9. A group of 13 were from the Chapin United Methodist Church in South Carolina, whose mission trips were coordinated through the Texas-based organization Mission of Hope Haiti.

Jody Flowers, the lead minister of the church, said that the group was scheduled to arrive back in Atlanta on the evening of July 9.

Flowers said in a statement: “Some great news! The Chapin UMC team has arrived safely at the airport in Port-au-Prince. They’re scheduled to arrive in ATL at 7:01 pm.”

Another youth missionary group, organized by the nonprofit MyLifeSpeaks, also announced July 9 that they had arrived safely at the airport.

“The Woodland Community Church and The Glade Church team arrived safely at the airport in Port-au-Prince this morning! They are scheduled to return home to the U.S later today,” the nonprofit wrote on Facebook. “Thank you for praying for this incredible group during their extended stay in Neply!”

The Woodland Community Church and The Glade Church team arrived safely at the airport in Port-au-Prince this morning!…

Dozens of travelers at the Toussaint Louverture International Airport remain stranded as they wait for flights to resume.

The U.S. Embassy in Haiti was closed for routine services on Monday, according to the alert. Canadian and Mexican embassies in Haiti also announced they would be closed the same day.

A July 9 warning from the U.S. Department of State Bureau of Consular Affairs said they “continue to strongly advise U.S. citizens to reconsider travel to Haiti due to crime, civil unrest, & USEmbassyHaiti’s limited ability to provide assistance.”

We continue to strongly advise U.S. citizens to reconsider travel to #Haiti due to crime, civil unrest, & @USEmbassyHaiti's limited ability to provide assistance. U.S. citizens currently in Haiti should shelter in place due to continuing demonstrations, roadblocks, and violence.

On July 8, a spokesman for U.S. carrier American Airlines told Reuters it had canceled three out of seven round-trip flights scheduled to stop in Port-au-Prince. The carrier’s Sunday route to Haiti’s Cap-Haitien airport had not been canceled. JetBlue Airways also canceled its flights to Haiti on Sunday.