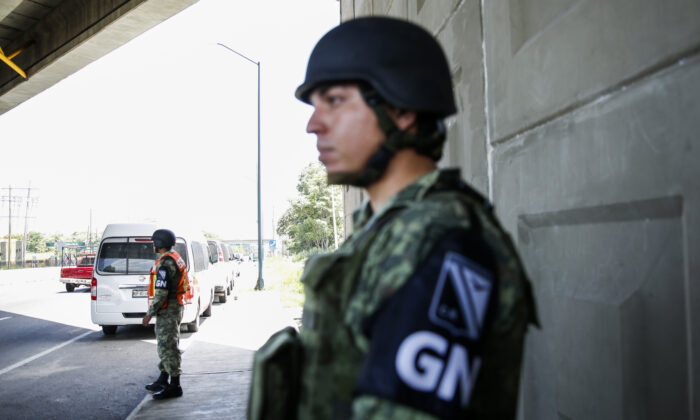 US, Mexico in Meetings to Address Deadly Drug Cartel Threat

The meetings come after President Donald Trump said in late November that he would designate Mexican drug cartels as foreign terrorist organizations for their role in the trafficking of narcotics and people. Trump’s comments came in response to a series of bloody security breaches triggered by cartel gunmen.

The bilateral talks involved Barr, Mexican President Andrés Manuel López Obrador, and other senior officials, and a document was reviewed that will serve as a point of reference, López Obrador told a regular news conference. No further details were provided.

“Mexico is one of our closest partners and we meet regularly on a broad range of issues of mutual concern,” a U.S. State Department spokesperson told The Epoch Times via email on Dec. 5. “We do not discuss the contents of diplomatic conversations.”

Hugo Rodriguez, deputy assistant secretary of state for Central America, said at a Dec. 4 briefing that the United States will “have to work with [Mexico] to find the tools that are going to be appropriate in the context.

“What we’re looking to do is put at the service of the Government of Mexico any and all tools we have at our disposal, to cooperate on the shared security challenge that the drug trafficking organizations pose,” Rodriguez told reporters.

Efforts to designate the cartels as foreign terrorists are something the United States has been “looking very closely at,” he said.

“I don’t think we have any specifics to share at this point,” Rodriguez said. “We’re also in conversations with the Government of Mexico.”

Tensions over the cartels intensified in November after suspected cartel hitmen massacred three women and six children of U.S.-Mexican nationality in northern Mexico.

Trump called the suspected hitman “monsters” and said the United States is ready to get involved. He said recently that he had been working on getting the foreign terror organization designation “for the last 90 days.”

“If Mexico needs or requests help in cleaning out these monsters, the United States stands ready, willing & able to get involved and do the job quickly and effectively,” Trump said on Twitter. “The great new President of Mexico has made this a big issue, but the cartels have become so large and powerful that you sometimes need an army to defeat an army!”

Designating groups as foreign terrorist organizations enables the United States to disrupt the finances of suspected members and their supporters via U.S. sanctions such as asset freezes and travel bans. It wouldn’t directly give the United States authority for military operations in Mexico.

López Obrador has attempted to pursue a less confrontational approach to the cartels and has rejected any intervention. He has held out the prospect of cooperation with the United States, but says his government has the wherewithal to tackle the problem.

The State Department criteria for designating foreign terrorist organizations requires that the group must be a foreign organization and that its “terrorist activity or terrorism must threaten the security of U.S. nationals or the national security (national defense, foreign relations, or the economic interests) of the United States.”

Once a group is designated as a foreign terrorist organization, under U.S. law, it’s illegal for people in the United States to knowingly offer support to the group and its members can’t enter the country and may be deported.

Financial institutions that become aware they have funds connected to the group must block the money and alert the U.S. Treasury Department. Suspected agents of foreign terrorist organizations can also be targeted for a certain level of surveillance under the Foreign Intelligence Surveillance Act.