Trump Says He Will Designate Mexican Cartels as Terrorists 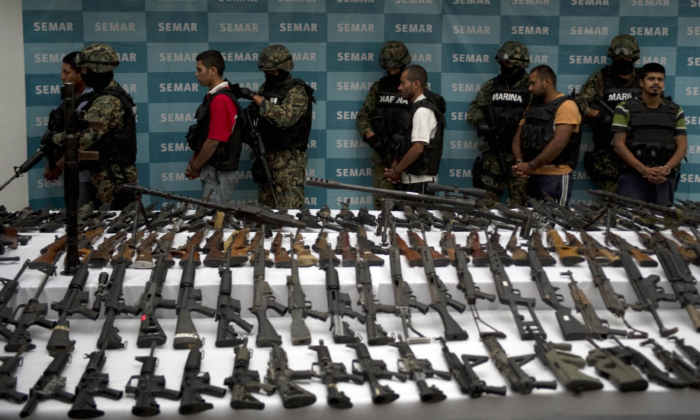 President Donald Trump said he will designate Mexican drug cartels as terrorist groups for their role in the trafficking of narcotics and people, prompting a speedy request for talks by Mexico.

“They will be designated,” Trump said in an interview with Bill O’Reilly that aired on Nov. 26. “I have been working on that for the last 90 days. You know, designation is not that easy, you have to go through a process, and we are well into that process.”

Cartel violence is rampant in Mexico. Earlier this month, Trump responded to the bloodiest attack on U.S. citizens in Mexico in years by offering to help the nation “wage WAR on the drug cartels and wipe them off the face of the earth.”

Three women and six children of dual U.S.–Mexican nationality were killed in an ambush in northern Mexico. Mexican authorities said they may have been victims of mistaken identity amid confrontations among drug gangs in the area.

In the interview, Trump declined to say what steps he’ll take after formalizing the terrorist group designation.

“I don’t want to say what I am going to do, but they will be designated,” Trump said. “Look, we are losing 100,000 people a year to what is happening and what is coming through from Mexico.”

“They have unlimited money, the people, the cartels, because they have a lot of money, because it is drug money and human trafficking money.”

Mexico’s foreign ministry issued a statement saying it would quickly seek a high-level meeting with U.S. State Department officials to address the legal designation, as well as the flow of arms and money to organized crime.

“The foreign minister will establish contact with his counterpart, Michael R. Pompeo, in order to discuss this very important issue for the bilateral agenda,” the ministry said.

Mexican President Andrés Manuel López Obrador said Mexico would take up the issue after Thanksgiving and that he had asked his foreign minister to lead talks.

What Does It Mean?

The State Department criteria for designating terror organizations requires that the group must be a foreign organization and that its “terrorist activity or terrorism must threaten the security of U.S. nationals or the national security (national defense, foreign relations, or the economic interests) of the United States.”

Once a group is designated as a terrorist organization, under U.S. law, it’s illegal for people in the United States to knowingly offer support; its members can’t enter the country and may be deported. Financial institutions that become aware they have funds connected to the group must block the money and alert the U.S. Treasury Department. Suspected agents of foreign terrorist organizations can also be targeted for a certain level of surveillance under the Foreign Intelligence Surveillance Act.

Some U.S. officials have previously suggested the United States might be forced to take action if Mexico can’t deal with the cartels.

On the day before Trump’s interview aired, Mexican Foreign Minister Marcelo Ebrard said he didn’t expect the United States to designate cartels as terrorists. He said the two countries were already cooperating to fight cartels and suggested a designation was not necessary.

“I don’t think the United States will pursue this path because we’re working together, and I don’t think they would want to open up the possibility of Mexico invoking the same legal principles,” Ebrard told reporters.

Alex LeBaron, a former Mexican congressman and relative of some of the victims of the Nov. 4 attack, on Twitter rejected the idea of a U.S. “invasion.”

“We have already been invaded by terrorist cartels,” he wrote. “We demand real coordination between both countries… both countries are responsible for the rising trade in drugs, weapons, and money.”

Mexican army Gen. Homero Mendoza said at a Nov. 6 press conference that a criminal group called La Linea is believed to be responsible for the attack as it sent a group of gunmen to the area to prevent incursion from a rival crime group, Los Salazar, which is aligned with the Sinaloa cartel.

But the LeBaron extended family has often been in conflict with drug traffickers in Chihuahua and victims’ relatives said the killers must have known who they were targeting.

More than 100 people have left the village the victims lived in since the attack, heading for the United States.

The LeBarons belong to a Mormon colony in Chihuahua, Mexico, that was set up in late 1800s. It’s first members left the United States when polygamy was outlawed.

The colony has had run-ins with the cartels for years, in the form of slayings, kidnappings, and other crimes.

In 2010, two members of the Mormon community, including one from the LeBaron family, were killed in apparent revenge after the Mormons pressured authorities to secure the release of another member of their community kidnapped by the cartels.

López Obrador has tried adopting a softer approach to cartels than some of his predecessors, arguing that violence only begets more violence.

“It was lamentable, painful because children died, but do we want to resolve the problem the same way [as previous administrations]? By declaring war?” he said at a press conference. “That, in the case of our country, showed that it does not work. That was a failure. It caused more violence.”

Mexico has faced an escalating murder epidemic in recent years. The government has recorded more than 250,000 homicides in the past dozen years, including more than 30,000 in the first seven months of 2019, most of them related to the drug war. That excludes an unknown number of disappearances.

The violence spills over into the United States, with a large part of shootings and murders across the country being related to drug-dealing gangs.

In addition, the drugs smuggled from Mexico are a major driver behind the opioid epidemic in the United States, which cost almost 70,000 lives in 2018.

The drug trade proceeds from the United States are then funding the cartel operations, allowing them to procure heavy armaments.

“We’re talking about surface-to-air missiles, grenades. They have armored vehicles. They have big machine guns on the top of the vehicles,” Derek Maltz, former head of the Drug Enforcement Administration’s special operations division, previously told The Epoch Times.

Maltz has been advocating for designating some cartels as terrorists, likening the drug trade to waging a chemical war on the United States.

“Now you have Chinese organized crime that are making mass amounts of fentanyl in these labs in China … selling it to the Mexican cartels. [They’re] combining the fentanyl with all the other drugs that they’re selling and dumping these chemicals into our country. Well, the chemicals are like a poisonous chemical attack.”

Update: The article has been updated with further information about terrorist designations, proponents of cartels being designated as terrorists, about the Nov. 4 attack on U.S. citizens, and about the Mormon colony in Mexico.