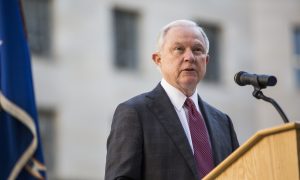 Justice Department May Have Something Big in the Works: Over 9,000 Sealed Indictments
0 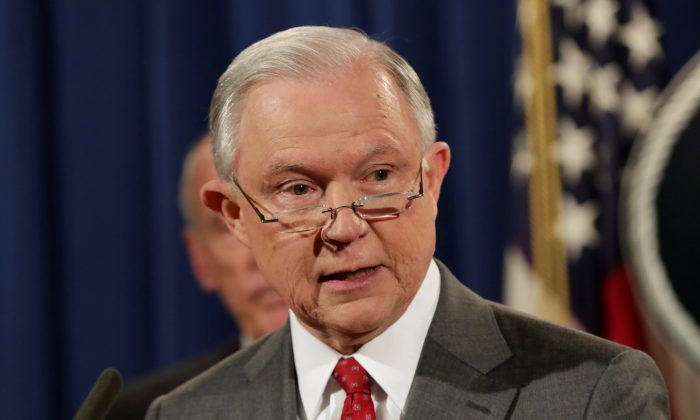 U.S. Attorney General Jeff Sessions speaks at a briefing on leaks of classified material threatening national security at the Justice Department in Washington on Aug. 4, 2017. (REUTERS/Yuri Gripas)
US News

The Department of Justice (DOJ) indicted the former co-president of a Maryland-based transportation company for his alleged role in the bribery of a Russian official connected to Russia’s State Atomic Energy Corporation.

The American company, whose name was withheld by the DOJ, specializes in the transportation of nuclear materials in the United States and around the world.

The indictment, which was unsealed by the DOJ on Jan. 12, charges Mark Lambert with 11 counts. The DOJ currently has an unusually high amount of sealed indictments filed in districts across the United States, an estimated 9,000 since October last year.

One of the charges is that Lambert conspired to violate the Foreign Corrupt Practice Act (FCPA). The alleged conspiracy involved payments to Russian official Vadim Mikerin in return for lucrative contracts.

Mikerin had already pleaded guilty to conspiracy to commit money laundering involving violations of the FCPA in June 2015, and is currently serving a sentence of 48 months in prison.

According to the DOJ the alleged bribery started as early as 2009 and continued until October 2014.

The Hill had reported on Oct. 18, 2017, that as early as 2009 “Moscow had compromised an American uranium trucking firm with bribes and kickbacks.”

It is unclear if the trucking firm in question is the same as the one now charged by the DOJ.

The Russian efforts at the time were part of a larger bribery scheme uncovered by the FBI, and took place at the same time as the Obama administration evaluated giving approval for Russia’s State Atomic Energy Corporation to gain a majority stake in Canadian mining company Uranium One.

“The FBI had gathered substantial evidence that Russian nuclear industry officials were engaged in bribery, kickbacks, extortion and money laundering designed to grow Vladimir Putin’s atomic energy business inside the United States,” The Hill reported based on government documents and interviews in its October article.

Uranium One at the time controlled 20 percent of the uranium supply licensed for mining in the United States.

By giving Russia control over a significant portion of American uranium supplies, the deal created a potential national security risk.

Despite the assurances of the Nuclear Regulatory Commission (NRC) to Congress that the uranium mined by Uranium One would not leave the United States, it did.

NRC memos reviewed by The Hill show that uranium transfers to Canada as well as Europe were approved by the Obama administration. From either destination, it could have made its way to other countries, potentially including adversaries of the United States in pursuit of nuclear weapons.

It is possible the Maryland transportation company was involved in the transports, this cannot be confirmed at this time however.

DOJ Investigation Into Uranium One

Last month it was made public that DOJ prosecutors requested information from FBI agents about the investigation they conducted into the Uranium One deal.

Because uranium, when enriched, is a key component for nuclear weapons, the deal required a national security review by the Committee on Foreign Investments in the United States (CFIUS).

While the deal was under review, the Clinton Foundation received millions in payments linked to Uranium One.

At the same time that the security review was being conducted, Bill Clinton received a speaking fee of $500,000 from a Kremlin-linked investment bank.

In 2006, the Clinton Foundation had already received a $31.3 million donation from Canadian billionaire Frank Giustra, owner of mining company UrAsia, which merged with another mining company in 2007 to become Uranium One.

Giustra still serves on the board of directors of the Clinton Foundation.