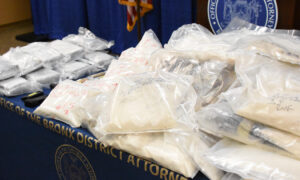 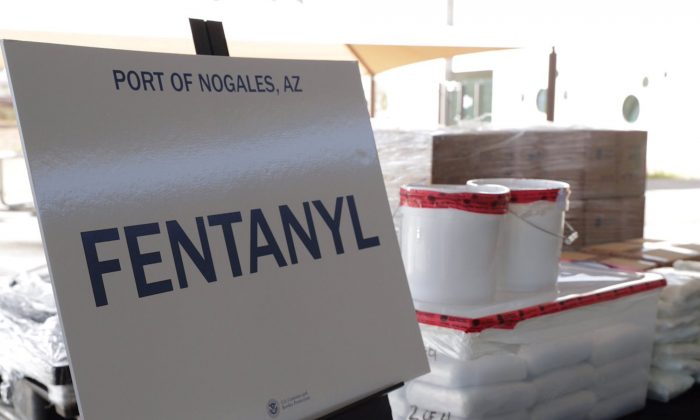 Efforts by the United States to curb the influx of the deadly opioid fentanyl culminated in the brief arrest of a son of imprisoned kingpin Joaquin “El Chapo” Guzman last month in the Mexican state of Sinaloa, the home turf of the notorious Sinaloa cartel.

Ovidio Guzman was briefly arrested after the United States requested his extradition, although he was later freed by outnumbered officials who feared a bloody confrontation with cartel henchmen.

“One of the very reasons for the U.S. interest, and the basis for the extradition order, is, in fact, the suspected link between this alleged criminal and introducing fentanyl into the United States,” Durazo told reporters.

China has been identified as the largest and primary source of illicit fentanyl and fentanyl analogs entering the United States, according to government commissions, law enforcement, and testimony from U.S. Immigration and Customs Enforcement.

Much of the fentanyl precursor chemicals are sent to Mexico from China; Mexican cartels then synthesize these precursors in their labs.

In August, the Mexican navy found 52,000 pounds of fentanyl powder in a container from a Danish ship that was coming from Shanghai. The navy intercepted the 40-foot container on Aug. 24, at the Port of Cardenas.

Ovidio Guzman’s role has grown since his father was extradited in 2017 to face drug charges; Joaquin Guzman is currently serving a life sentence in a U.S. prison.

A U.S. district court indictment against Ovidio Guzman, issued in February, charged him with conspiring to traffic cocaine, methamphetamine, and marijuana, but didn’t directly mention fentanyl.

President Donald Trump in August said Mexico needed to do more to halt fentanyl production and smuggling across the U.S.–Mexico border. The Sinaloa cartel is likely one of Mexico’s top fentanyl traffickers to the United States, according to the Drug Enforcement Administration (DEA).

The cartel recently appears to have moved into the production of the drug. In September, DEA officers took part in a “covert mission” in Sinaloa, the agency said in a statement at the time.

“Profit margins for fentanyl and methamphetamine are driving the drug trade by the cartels,” the statement said.

Fentanyl is made in a lab with chemicals and is cheap to produce. According to the Heritage Foundation, the profit margin is enormous: a $3,000 investment can return $1.5 million in earnings.

The Sinaloa cartel, according to the DEA, is one of the oldest and more established drug trafficking organizations in Mexico. The cartel controls drug trafficking activity in different regions in Mexico, especially along the Pacific Coast, although its stronghold is in the state of Sinaloa.

The cartel primarily smuggles its illicit drugs into the United States “through crossing points located along Mexico’s border with California, Arizona, New Mexico, and West Texas,” the DEA said in February this year.

Pharmaceutical fentanyl, however, has been approved for treating severe pain for conditions such as late-stage cancer and is prescribed by doctors typically through transdermal patches or lozenges.