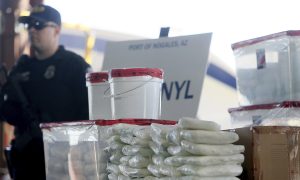 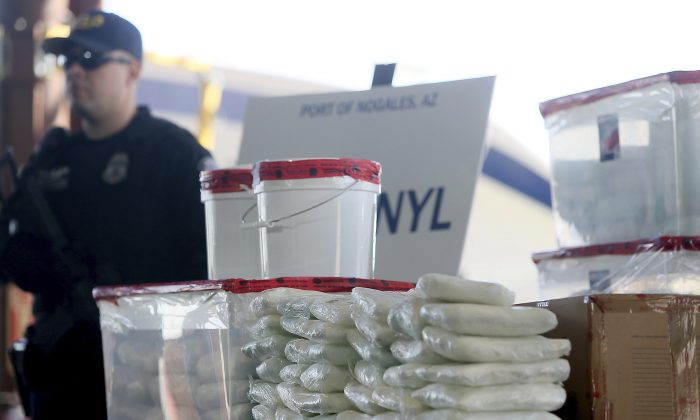 A display of fentanyl and meth seized by U.S. Customs and Border Protection officers at the Nogales Port of Entry at a press conference in Arizona on Jan. 31, 2019. (Mamta Popat/Arizona Daily Star via AP)
US-China Relations

The Mexican Navy in the Port of Cardenas discovered 52,000 pounds of fentanyl powder in a mismarked container from a Danish ship arriving from Shanghai, China.

The cargo manifest for the 40-foot ocean container stated that the powder content was 23,368 kilograms of inorganic calcium chloride, commonly used as an electrolyte in sports drinks, beverages, bottled water and as a non-sodium flavoring for pickles.

The Navy of Mexico intercepted the unloaded 40-foot container on Aug. 24, which originated from Shanghai, China and was bound for the Sinaloa Cartel home-base in Culiacan, 300 miles north of the port. According to local media, the Navy alerted customs authorities from the nearby City of Lazaro Cardenas. Samples collected from plain bulk-bags were taken to a laboratory that confirmed the powder was fentanyl.

Mexican Customs seized 931 sacks of the substance weighing about 25.75 tons. The total weight of the fentanyl powder seizure is preliminary, with authorities still evaluating the purity of fentanyl seized. But if the seizure is confirmed as pharmaceutical-grade fentanyl, it could be pressed into tens of millions of tablets.

Fentanyl synthetic-opioid was hailed as a wonder drug 50 years ago when it was approved as a more effective treatment than drip morphine for cancer patients’ pain. With four types of opioid receptors throughout the human body, pharmacological fentanyl is more effective attaching faster to all the receptors than the highest purity of illicit street-heroin.

Drug cartels favor fentanyl or fentanyl precursors imported from China because it can be diluted with fillers and marketed by street-dealers as cocaine, heroin or meth. Fentanyl can also be pressed into pills and sold on the street as oxycodone.

The National Institute on Drug Abuse warns that pharmaceutical-grade fentanyl is 50 to 100 times more potent than morphine. Fentanyl is extremely dangerous to handle because as little as 0.25 milligrams absorbed through the skin can be lethal.

According to the non-partisan U.S. Congressional Research Service dated Aug. 15, Mexico’s transnational crime groups expanded their control of the opioids market, with U.S. overdose deaths rising to a record 72,000 in 2017.

Former Sinaloa Cartel crime boss Joaquin Guzman Loera (“El Chapo”) was extradited to the United States in January 2017. He was earlier convicted in Mexico for trafficking cocaine, heroin and fentanyl. But he successfully escaped from two Mexican prisons.

Guzman was sentenced by a U.S. district judge in July 2019 to a life term in a maximum-security U.S. prison, with the addition of 30 years, and ordered to pay $12.6 billion in forfeiture for being the principal leader of the Sinaloa Cartel and for 26 drug-related charges, including a murder conspiracy.