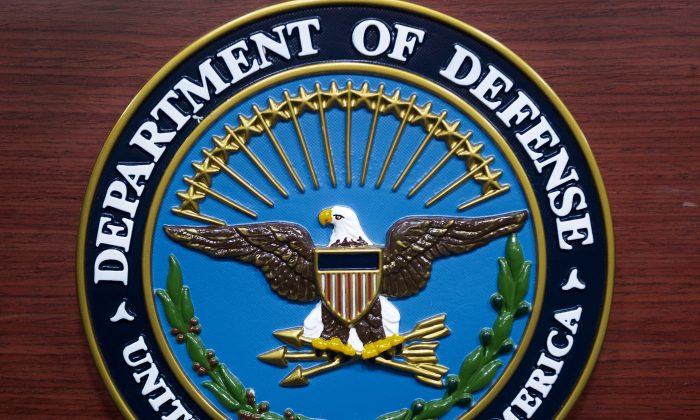 The U.S. Department of Defense seal is seen on the lecturn in the media briefing room at the Pentagon in Washington, DC, on December 12, 2013. (PAUL J. RICHARDS/AFP/Getty Images)
Middle East

US Contractor Killed in Iraq Base Rocket Attack, Troops Wounded

A rocket attack in northern Iraq has killed a U.S. defense civilian contractor as well as wounded several American and Iraqi troops on Friday, Dec. 27, officials said according to multiple reports.

Officials with Operation Inherent Resolve (OIR), the U.S.–led military intervention to defeat the ISIS terrorist group, told the Military Times that the attack targetted an Iraqi military compound near Kirkuk, where U.S. service members are also based, and occurred around 7:20 p.m. local time.

The attack involved some 30 rockets fired at the military base, The Associated Press reported, citing officials.

Col. Myles Caggins, a spokesman for OIR, told AP that Iraqi security forces were leading the investigation and response to the attack.

Reuters reported, citing U.S. officials, that the service members were lightly wounded and believed to be back on duty. The news wire service also reported, citing an official, that the United States was investigating the possible involvement of Kataib Hezbollah, an Iranian-backed Shi’ite Muslim terror organization.

According to Reuters, Iraqi military said in a statement earlier on Friday that several rockets were launched into Iraq’s K1 military base, where U.S. and Iraqi forces are stationed. They added that security sources said they found a launchpad for Katyusha rockets inside an abandoned vehicle near the base. The K1 base lies 9 miles northwest of Kirkuk, in northern Iraq, houses U.S. military forces alongside Iraqi forces from the Federal Police and Counter-Terrorism Service, security sources told Reuters. About 5,000 U.S. troops are in Iraq.

No group has claimed responsibility for the latest attack, which is at least the 11th such attack in the past two months that has targeted an outpost where U.S. troops stay, the Military Times noted. However, U.S. officials believe Iranian-backed forces are responsible for most of the attacks, with one telling the news outlet that Iran-backed groups have been using lethal and extended range 122 mm rockets in their recent attacks.

The United States has urged Iraq to take steps to help prevent bases where U.S. troops stay from being shelled. U.S. Secretary of Defense Mark Esper expressed concern over the “targeting of some places,” during a Dec. 16 call with the then-Iraqi Prime Minister Adel Abdul Mahdi, according to a statement from the Iraqi leader’s office.

In early December, Esper warned that attacks by Iran-backed groups on bases hosting U.S. forces in Iraq were pushing all sides closer to an uncontrollable escalation.

Abdul Mahdi resigned in late November, amid anti-government protests over unemployment, government corruption, and a lack of basic services. Abdul Mahdi is now carrying out his duties in a caretaker capacity.

The protests had gripped Iraq since Oct. 1, when thousands took to the streets in Baghdad and the predominantly Shi’ite south. The largely leaderless movement accuses the government of being corrupt and decries the Iranian regime’s growing influence in Iraqi state affairs.

The mass uprisings have left more than 450 people dead, the vast majority of them demonstrators—killed by security forces firing tear gas and live ammunition.

In a statement released on Nov. 10 by the United States, White House press secretary Stephanie Grisham condemned Iraq’s attacks against its protesters and the media.

“The United States is seriously concerned by continued attacks against protestors, civic activists, and the media, as well as restrictions on internet access, in Iraq,” Grisham said. “Iraqis won’t stand by as the Iranian regime drains their resources and uses armed groups and political allies to stop them from peacefully expressing their views.”

The Trump administration in early December imposed sanctions on three leaders of Iran-backed militias in Iraq for their alleged role in the killing of Iraqi protesters.

Esper has said that intelligence and forensic analyses of the rockets and launchers pointed to Iranian-backed Shi’ite Muslim militia groups.