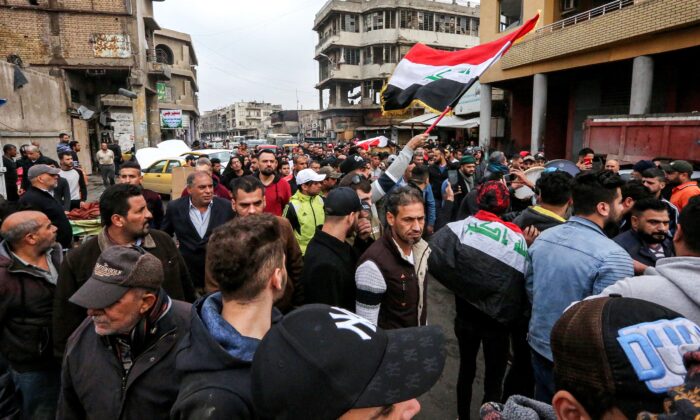 Iraqi mourners gather for the funeral of an anti-government protester who died from injuries sustained in previous confrontations with security forces, in the capital Baghdad on Dec. 3, 2019. (Sabah Arar/AFP via Getty Images)
By Petr Svab

The Trump administration has imposed sanctions on three leaders of Iran-backed militias in Iraq for their alleged role in the killing of Iraqi protesters.

“Iran’s attempts to suppress the legitimate demands of the Iraqi people for reform of their government through the slaughter of peaceful demonstrators is appalling,” said Treasury Secretary Steven Mnuchin in a Dec. 6 release.

“Peaceful public dissent and protest are fundamental elements of all democracies. The United States stands with the Iraqi people in their efforts to root out corruption. We will hold accountable the perpetrators of human rights abuse and corruption in Iraq.”

“During the late 2019 protests in many cities in Iraq, AAH has opened fire on and killed protesters,” Treasury said.

Qais al-Khazali used to be part of a committee of Islamic Revolutionary Guard Corps-Qods Force (IRGC-QF) proxies that, according to the release, “approved the use of lethal violence against protesters for the purpose of public intimidation.”

“Al-Lami directed militia fighters who shot protesters in early October 2019, a time when dozens of protesters were killed,” the release said.

Iraqi paramilitary groups deny any role in the deaths of protesters.

“According to a former senior Iraqi government official, al-Khanjar’s influence has been mostly due to his willingness and ability to use his wealth to bribe others. Al-Khanjar has reportedly planned to spend millions of dollars in payments to Iraqi political figures in order to secure their support.”

The sanctions freeze any U.S. assets held by the leaders and prohibit Americans from doing business with them.

Tehran’s allies have come to mostly dominate Iraqi state institutions since the 2003 U.S. invasion that toppled the regime of Saddam Hussein.

The protests in Iraq coincided with mass protests in Iran, where the Islamic regime acknowledged 200,000 took to the streets. At least 208 people are believed to have been killed during anti-government demonstrations in Iran, Amnesty International reported on Dec. 2.

“The real figure is likely to be higher,” the nonprofit stated.

The protests seemed to start over a new gasoline tax, but quickly turned into a protest against the regime.

The government said the protesters attacked or torched hundreds of banks, gas stations, and government sites.

Iran’s economy has suffered under extensive sanctions imposed by Trump in 2018 after quitting the Iran nuclear deal.

Trump offered to negotiate a new deal, but wants it to address not only Iran’s nuclear program, but also matters such as its ballistic missile program and funding terrorists and militias across the region. Tehran has refused to talk until the United States returns to the deal and lifts sanctions.

Oil exports are the regime’s main source of foreign currency, which it uses to pay its terrorist and militia proxies.