US Urges Iraq to Stop Attacks on Bases Housing US Forces 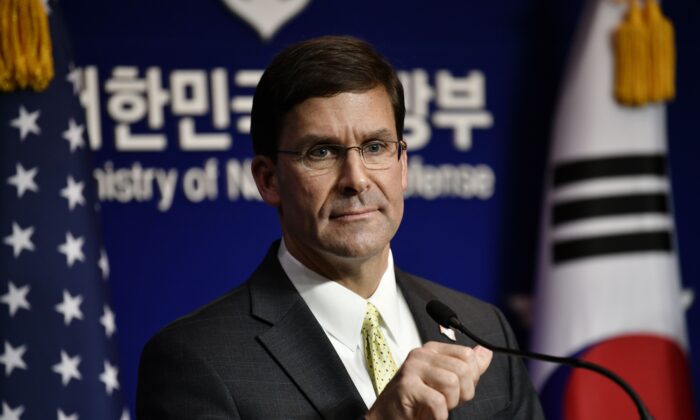 The United States is urging Iraq to take steps to help prevent bases where U.S. troops are stationed from being shelled amid the country’s mass anti-government protests.

Secretary of Defense Mark Esper expressed concern over the “targeting of some places,” during a Dec. 16 call with Iraqi Prime Minister Adel Abdul Mahdi, according to a statement from the Iraqi leader’s office. Abdul Mahdi resigned last month amid protests over unemployment, government corruption, and a lack of basic services and is now carrying out his duties in a caretaker capacity.

Last week, Esper warned that attacks by Iran-backed groups on bases hosting U.S. forces in Iraq were pushing all sides closer to an uncontrollable escalation. Rocket strikes targeting Iraqi bases where members of the U.S.-led coalition are also stationed have increased in past weeks, with no claim of responsibility from any party.

Anti-government protests have gripped Iraq since Oct. 1, when thousands took to the streets in Baghdad and the predominantly Shiite south. The largely leaderless movement accuses the government of being corrupt and has also decried the Iranian regime’s growing influence in Iraqi state affairs.

Abdul Mahdi also warned Esper “that taking unilateral decisions will have negative reactions that are difficult to control and threaten the security, sovereignty, and independence of Iraq,” according to the statement.

In a statement released earlier November by the United States, White House press secretary Stephanie Grisham condemned Iraq’s attacks against its protesters and the media.

“The United States is seriously concerned by continued attacks against protestors, civic activists, and the media, as well as restrictions on internet access, in Iraq,” Grisham said. “Iraqis won’t stand by as the Iranian regime drains their resources and uses armed groups and political allies to stop them from peacefully expressing their views.”

Esper has said that intelligence and forensic analyses of the rockets and launchers pointed to Iranian-backed Shi’ite Muslim militia groups.

Anti-government protests have also gripped Iran. The protests, which lasted about four days in several cities and towns in November, were sparked by a sharp rise in gasoline prices. During the violence and in the days that followed, Iranian authorities blocked access to the internet.

Amnesty International updated its death toll on Dec. 16, saying that at least 304 people were killed in protests last month. The number was significantly higher than what the rights group had reported previously.

The United States has put the number of Iranian protesters killed even higher, accusing Iranian security forces on Dec. 5 of killing potentially more than 1,000 people as part of a crackdown against recent protests. The Pentagon, meanwhile, is considering whether to send additional U.S. troops to help combat the violent suppression.

Brian Hook, U.S. special representative for Iran, told reporters the tally was based on a variety of reports coming out of Iran, as well as intelligence analyses.

Speaking at the State Department, Hook said the United States had received and reviewed video of one specific incident of repression in the city of Mahshahr, during which the Iranian Revolutionary Guards Corps (IRGC) had mowed down at least 100 protesters with machine-gun fire.

Most recently, the Treasury Department on Dec. 11 imposed new sanctions on an Iranian airline as well as an Iranian shipping network involved in smuggling lethal aid to Yemen on behalf of the IRGC-Quds Force.

“The Iranian regime uses its aviation and shipping industries to supply its regional terrorist and militant groups with weapons, directly contributing to the devastating humanitarian crises in Syria and Yemen,” Treasury Secretary Steven Mnuchin said in a Dec. 11 statement.

Iran acknowledged on Nov. 27 that 200,000 took part in the protests and 7,000 were arrested, marking possibly the largest anti-government demonstrations in the regime’s 40-year history.