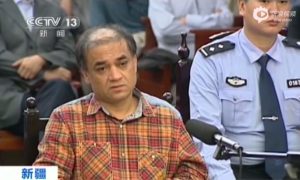 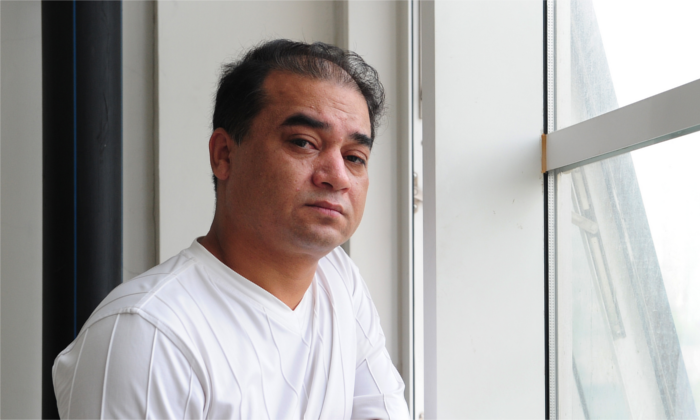 Ilham Tohti pauses before a classroom lecture in Beijing on June 12, 2010. He was nominated for the Nobel Peace Prize on Jan. 30 by two U.S. congressmen. (FREDERIC J. BROWN/AFP/Getty Images)
China Human Rights

Ilham Tohti, an ethnic Uyghur who is an economist, writer, and professor, worked to encourage “harmony and understanding” between ethnic Han Chinese and Uyghur Muslims in China, according to a letter from the lawmakers.

Rep. Chris Smith (R-N.J.) and Sen. Marco Rubio (R-Fla.) nominated Tohti for the prize on Jan. 30. Both Smith and Rubio have served as chairs for the bipartisan Congressional-Executive Commission on China.

Smith and Rubio worked together in writing a letter for Tohti’s nomination. A bipartisan and bicameral group of lawmakers signed the letter.

“Ilham Tohti deserves the Nobel Peace Prize, not a prison sentence,” Smith said. “He devoted his life to fostering peaceful relations between ethnic communities in China and for this he was jailed, tortured, and his family threatened and financially ruined.”

Smith described the Chinese Communist Party’s (CCP) actions in the Xinjiang region as “repugnant,” as the CCP destroys the Uyghur culture and its Muslim religion. He also condemned the CCP for attempting to assimilate over a million Uyghurs through “political reeducation” camps.

“While the Chinese government has needlessly created division and despair, Ilham Tohti tried to promote peaceful reconciliation and tolerance; for this he deserves the Nobel Peace Prize,” Smith said. “His work was important and should be recognized now more than ever.”

Rubio also criticized the CCP for the internment of millions of Uyghurs. “This nomination could not be more timely as the Chinese government and Communist Party continue to perpetrate gross human rights violations,” said Rubio.

Tohti was unjustly sentenced to life in prison for “separatism,” by a court in Xinjiang in September 2014, according to the letter to addressed to the Nobel Peace Prize committee.

“Professor Tohti’s courageous work embodied precisely the kind of insight and guidance on interethnic problems that should be embraced by Chinese officials who have, instead, chosen to silence Professor Tohti,” said the letter.

Before his arrest, Tohti worked at the Minzu University of China in Beijing. His commentary was regarded as reasonable, though critical of the CCP’s policies toward Xinjiang and the Uyghurs.

Tohti was accused of having committed crimes against the “people’s democratic dictatorship regime and the socialist system.” The charges included “ethnic disharmony” and “ethnic chaos,” the definitions of which are determined by Party ideology, rather than law.

Despite the charge of separatism, Tohti opposed Xinjiang independence and advocated for open dialogue to resolve tensions between the ethnic Uyghurs and Han Chinese.

Tohti previously ran a website, wrote essays, and gave interviews to Western media about CCP policies in Xinjiang. Security forces then brought him back to Xinjiang, where he received a life sentence.

Since 2014, the CCP has stepped up pressure on Uyghurs in Xinjiang, culminating in its campaign, beginning last year, of arresting citizens en masse and placing them in internment camps. The CCP justified its treatment of Uyghurs as “counterterrorism” efforts.

Official news also had started criticizing Uyghur customs, including dress, facial hair, and religious schooling. More Han Chinese have migrated to the region, and some officials even introduced benefits for marrying Uyghurs.

In light of the human rights violations, the United Nations is preparing to inspect the Xinjiang reeducation camps. Officials in Xinjiang are attempting to quickly cover up their actions, by forcing prisoners to sign confidentiality agreements and shipping prisoners to other regions, according to an earlier Epoch Times report.