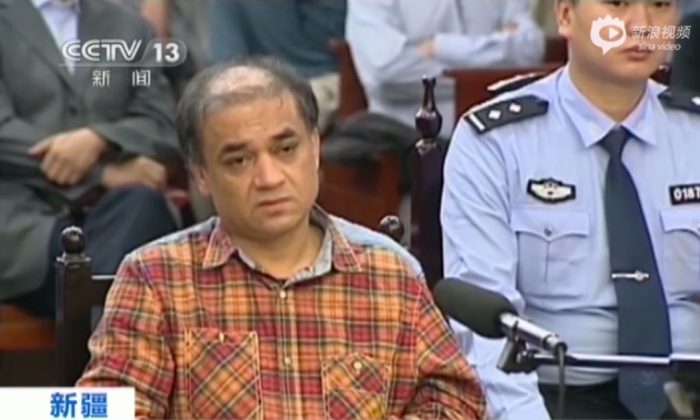 Uyghur university professor Ilham Tohti sits in the Urumqi People's Intermediate Court in western China's Xinjiang, on Sept. 23, 2014. He was sentenced life in prison for “separatism” by a Xinjiang court on Sept. 23, 2014. (Screenshot/China Central Television)
China

In a sentence that shocked observers and left his family reeling, the moderate Uyghur economics scholar Ilham Tohti was sent to prison on Sept. 23 for the rest of his life by the Intermediate People’s Court in Urumqi, the capital of the Xinjiang Uyghur Autonomous Region, on the charge of “separatism.” His family’s life savings were also confiscated.

Ilham Tohti, who taught at the Minzu University of China in Beijing, was widely seen as a dissenting though reasonable voice on the Chinese Communist Party’s ethnic policies in Xinjiang, the home of the Uyghurs, a Turkic-speaking Muslim people.

He opposed Xinjiang becoming an independent country—as implied in the charge of separatism—instead writing about the need for more open dialogue on the causes of mistrust and tension between Han Chinese, the dominant ethnicity, and the Uyghurs.

Tohti ran a website, penned essays, and offered interviews with the Western media discussing and criticizing official policies. For this he was harassed and followed for a number of years—and now, having been brought back to Xinjiang by local security authorities, sentenced to life in prison.

The extreme punishment of Tohti is likely to be seen by Uyghurs as the logical extension of the minority policy that he criticized.

In recent years there have been an increasing number of reports in China’s state-run media, impossible to verify, of Uyghur violence against Han Chinese. Official propaganda attempts to portray these as ideologically driven Islamist terrorist acts, while a more widely shared view is that they are the desperate measures of a people who themselves have been terrorized for decades.

Official news from Xinjiang over the last year has been a drumbeat of stepped up pressure on Uyghur customs and ways of life, including attempts to prevent the marking of Ramadan, a Muslim festival, restrictions on Muslim dress, facial hair, and religious schools. The security presence has also stepped up enormously, with mass-rally style denunciations of convicts, and a number of executions on charges of terrorism.

More Han Chinese are being shipped into the region, and some officials have offered incentives for intermarriage between Han and Uyghurs, seen as an attempt at an explicitly assimilationist policy. Professor Emeritus Bruce Jacobs from Monash University in Australia has characterized Chinese rule in Xinjiang as outright colonial.

The World Uyghur Congress, based in Belgium said it “condemns in the strongest possible terms” the sentence of Tohti. “Such an outcome is completely unacceptable and illustrates the clear lack of humanity or respect for basic legal rights on the part of Chinese officials,” the statement said.

The People’s Republic of China’s law on separatism describes the crime as one against the “people’s democratic dictatorship regime and the socialist system.”

Acts that constitute separatism, according to the law, include “inciting ethnic disharmony,” “creating ethnic chaos,” and “undermining national and ethnic unity.” The specific activities that run afoul of these provisions are determined by the courts, which are in turn controlled by Party authorities.

Nicholas Bequelin, an Asia researcher at Human Rights Watch, wrote on Twitter that “In trials such as Tohti’s the test for the court is whether the defendant has criticized the Party’s minority policies or not. Nothing else.”

A Moderate by His Own Pen

An examination of Tohti’s actual writings reveals a figure different than the one portrayed in official propaganda. In an article by Tohti titled “My dream and the career I have chosen,” published on Democratic China, an overseas website, he writes about what drove him to a career studying the ethnic tensions between Han Chinese and Uyghurs.

“After traveling to central Asia, Russia, South Asia, and other regions, I saw so many vivid cases of revenge killings due to ethnic conflicts, political instability, and failures in social change. This drove my strong wish to avoid such a tragedy from happening in China. It made me gradually put all my efforts into researching and studying the Xinjiang issue and the central Asia issue.”

Another line said, “I’m worried for my hometown, that my country will fall into turmoil and break apart.”

The political sensitivities around normal discussion of ethnic issues in China have exacerbated the problem, he writes.

“There’s not even basic public discussions about the issue between Uyghur and Han intellectuals. It’s an extremely abnormal and dreadful situation.”

He established the website Uighurbiz “to allow Uyghurs and Han people to communicate on one platform,” the essay stated.

It continued: “There are of course strong arguments when communicating, but I believe that controversy is not scary. It’s the suspicion and hatred created in silence that’s scary.”