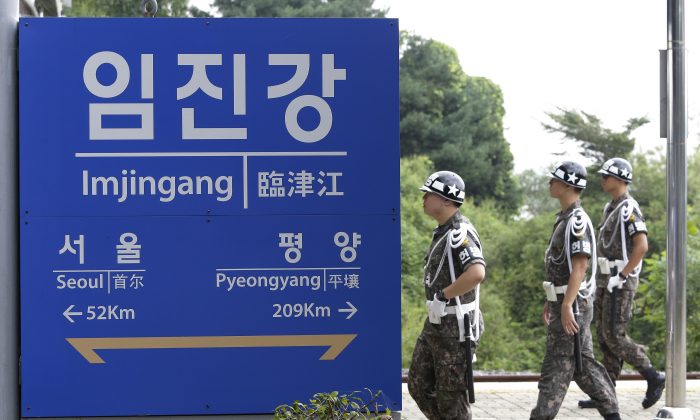 South Korean army soldiers walk by a signboard showing the distance to the North Korean capital Pyongyang and to South's capital Seoul from Imjingang Station near the border village of the Panmunjom in Paju on Sept. 11, 2016. (Ahn Young-joon/AP)
US-China Relations

WASHINGTON—A U.S. appeals court said on July 30 it had upheld a ruling by a U.S. judge who held three large Chinese banks in contempt for refusing to comply with subpoenas in a probe into violations of sanctions on North Korea, opening the way for heavy daily fines.

“The District Court’s contempt orders against all three Banks appealed from in these causes is hereby affirmed,” the U.S. Court of Appeals for the District of Columbia Circuit said in a filing on Tuesday. It did not make public the reasons.

In a ruling in May, Beryl Howell, Washington D.C.’s chief federal district judge, held the banks in contempt for refusing to comply with U.S. investigators’ demands that they hand over records connected to the alleged movement of tens of millions of dollars in violation of international sanctions on North Korea.

Howell did not identify the banks, but details in the ruling aligned with a 2017 civil forfeiture action against China’s Bank of Communications, China Merchants Bank and Shanghai Pudong Development Bank. All three are listed on the Shanghai Stock Exchange.The May ruling ordered daily fines of $50,000 on each bank for refusing to comply.

The Washington Post reported in June that the contempt ruling put Shanghai Pudong Development Bank at risk of losing access to U.S. dollar transactions. The bank has no U.S. branch operations but maintains accounts in the country to handle dollar transactions.

The U.S. Patriot Act allows the U.S. attorney-general or Treasury secretary to cut foreign banks off from dealing with U.S. financial institutions if they fail to comply with subpoenas.

According to court filings, the three banks have said the Chinese regime ordered them not to provide the records. They have the option to ask the appeals court to reconsider its judgment or to take the case to the U.S. Supreme Court.

The news came after a new round of U.S.-China negotiations aimed at ending a tit-for-tat trade war got underway in Shanghai. On Tuesday, U.S. President Donald Trump warned China against waiting out his first term to finalize any deal, saying that if he wins re-election in the 2020 U.S. presidential contest, the outcome will be worse for China.

By Jan Wolfe and David Brunnstrom