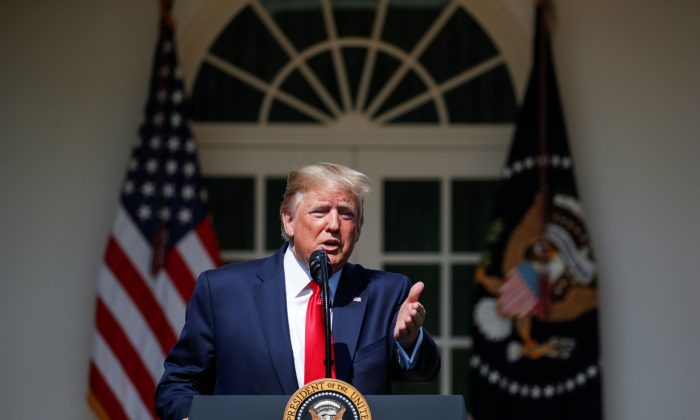 U.S. President Donald Trump speaks during a signing ceremony for the "Permanent Authorization of the September 11th Victim Compensation Fund Act" in the Rose Garden of the White House on July 29, 2019. (Reuters/Carlos Barria)
US-China Relations

President Donald Trump said on July 30 that the Chinese regime “would just love” if he were defeated in the 2020 elections, so that it can make a trade deal favorable to itself with a Democratic president.

“I think the biggest problem to a trade deal is China would love to wait,” Trump told reporters on the White House lawn before departing for a ceremony in Jamestown, Virginia, to commemorate the 400th anniversary of representative government in America.

He added that current trade talks are “moving very well,” although a final deal could still be a long way away.

“They’ll pray that Trump loses and they’ll make a deal with a stiff, somebody who doesn’t know what they’re doing.”

Earlier in the morning, Trump posted Twitter messages in which he warned the Chinese regime against waiting until the 2020 election results to make a trade deal. The comments were made as the two countries conduct in-person negotiations in Shanghai on July 30 and 31—for the first time since talks broke down in May. At the time, the United States accused the Chinese regime of reneging on commitments negotiated over previous months of talks.

Trump, in a series of tweets, said that if he wins re-election, the result could be no trade agreement, or a deal that is worse for Beijing than the one currently on the table.

“The problem with them waiting … is that if & when I win, the deal that they get will be much tougher than what we are negotiating now … or no deal at all,” Trump said in a tweet on July 30.

China is doing very badly, worst year in 27 – was supposed to start buying our agricultural product now – no signs that they are doing so. That is the problem with China, they just don’t come through. Our Economy has become MUCH larger than the Chinese Economy is last 3 years….

The president also highlighted China’s slowing economic growth, with recent figures showing that GDP growth is at its weakest pace in 27 years.

Trump also said the Chinese regime appears to be pulling back from a pledge to buy more U.S. farm products, as part of an agreement made between Trump and Chinese leader Xi Jinping to restart trade talks in late June.

“China … was supposed to start buying our agricultural product now – no signs that they are doing so. That is the problem with China, they just don’t come through,” Trump wrote on Twitter.

U.S. officials said they hoped that China would start buying agricultural products as a goodwill gesture, and as part of an overall trade deal.

The two sides have restarted talks in Shanghai in a bid to resolve an ongoing trade dispute. The United States has accused the Chinese regime of longstanding unfair trade practices, including theft of U.S. intellectual property, forced technology transfer, and currency manipulation.

White House economic adviser Larry Kudlow on July 26 said he “wouldn’t expect any grand deal,” at the two-day meeting, and that negotiators would try to “reset the stage” to bring the talks back to where they were before the breakdown in May.

Agathe Demarais, global forecasting director at The Economist Intelligence Unit, the analyst arm of The Economist media outlet, said a trade deal is a “distant prospect,” given the vast differences on key issues.

“China’s position appears unyielding as nationalist, patriotic, anti-U.S. sentiment has risen in recent days in the country,” she said in a statement. “The best potential outcome would be for U.S. and Chinese negotiators to agree to meet again.”