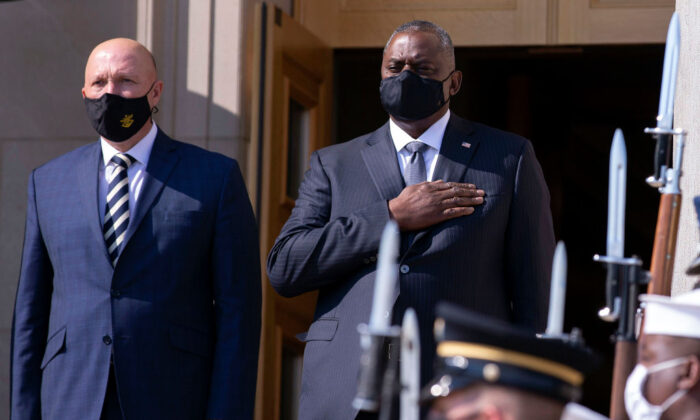 U.S. Secretary of Defense Lloyd Austin (R) and Australian Minister for Defense Peter Dutton stand for their national anthems during an honor cordon at the Pentagon in Arlington, Virginia, on Sept. 15, 2021 (Kevin Dietsch/Getty Images)
Australia

The United States will look to increase troop and military aircraft rotations in Australia as cooperation between the allies ramps up, following the recent signing of the AUKUS trilateral, security agreement amid ongoing tensions with Beijing in the region.

Austin said increasing the U.S. military’s presence in Australia was an exciting opportunity.

“Today, we endorsed major force posture initiatives that will expand our access and presence in Australia,” he told reporters in Washington D.C.

“If that includes basing and includes the storage of different ordinances, I think that is in Australia’s best interests, in our national interests at this point in time,” he said.

A joint statement released by both parties outlined a host of initiatives to be undertaken by AUSMIN leaders, including increased cooperation on technological innovation, development of secure supply chains, and support for human rights and multilateralism—including Australia’s decision to adopt Magnitsky-style human rights sanctions.

Currently, the U.S. rotates 2,500 marines in the northern city of Darwin, under a 2011 agreement.

Australian Prime Minister Scott Morrison backed the idea of a more prominent US military presence in the country.

“We obviously continue to work on the ways we can work further together, not just in the land space but in the maritime and the air space as well,” he told ABC radio on Sept. 17.

“What we’re talking about is exercises we do together, the way we work together in all of those domains,” he added. “That has always been a feature of how we work together, and we want to do that with more and more of our partners.”

Morrison is due to visit the White House next week to meet with U.S. President Joe Biden, along with fellow “Quad”—Quadrilateral Security Dialogue—leaders, Prime Ministers Yoshihide Suga of Japan, and Narendra Modi of India.

The meeting will also coincide with the United Nations General Assembly, which Biden will address on Sept. 21.

On Sept. 16, U.S. President Biden, the British and Australian Prime Minister’s Boris Johnson, and Morrison announced the AUKUS pact during a joint virtual press conference from each of their capitals.

The new alliance will see the U.S. and UK governments assist Australia with acquiring nuclear-powered submarines, and the development of a supporting industrial base.

The move would make Australia one of the only countries in the world—outside the United States, UK, China, Russia, France, India—to operate nuclear-powered subs, despite being a non-nuclear power.

“We will launch a trilateral effort of 18 months, which will involve teams—technical and strategic and navy teams—from all three countries to identify the optimal pathway of delivery of this capability,” according to a joint statement by the three governments.

The partnership is likely to have significant ramifications globally.

It will bolster the U.S. (post-Afghanistan) and UK government’s (post-Brexit) presence in the Indo-Pacific, while marking a significant shift for Australia’s defence capabilities (which has long eschewed nuclear development due to cultural sensitives and prohibitions under law).