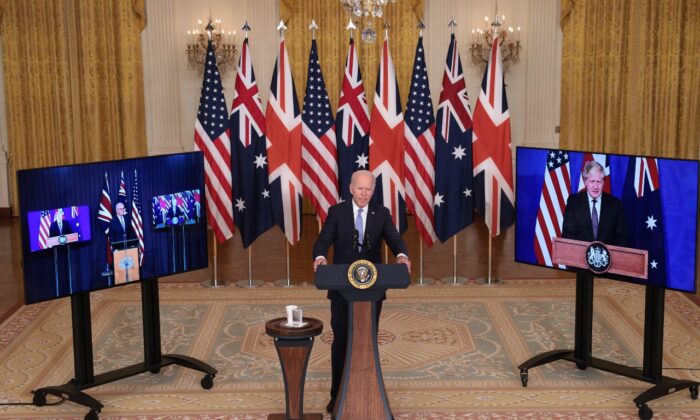 The United States, the UK, and Australia on Sept. 15 announced a new trilateral security partnership for the Indo-Pacific amid rising Chinese assertiveness in the region.

The new alliance was announced by President Joe Biden, British Prime Minister Boris Johnson, and Australian Prime Minister Scott Morrison during a joint virtual press conference from each of their capitals.

The first move under this partnership, called “AUKUS,” will be for the United States and the UK to support Australia in acquiring nuclear-powered submarines, according to a joint statement by the three governments.

“We all recognize the imperative of ensuring peace and stability in the Indo-Pacific over the long term,” Biden said.

Morrison said the submarines would be built in the city of Adelaide, in close cooperation with the United States and the UK; he stressed that Australia won’t be fielding nuclear weapons.

“We will continue to meet all our nuclear non-proliferation obligations,” he said.

Johnson called it a momentous decision for Australia to acquire the technology, adding that it would make the world safer. The three countries will now commence an 18-month consultation period to hash out the details of the development project, the joint statement said.

The alliance is also set to enhance sharing of information in key technologies between the three countries.

“AUKUS will bring together our sailors, our scientists, and our industries to maintain and expand our edge in military capabilities and critical technologies, such as cyber, artificial intelligence, quantum technologies, and undersea domains,” Biden said.

While China wasn’t specifically mentioned by the leaders, the communist regime loomed large over the announcement, which occurs as the Biden administration seeks to enhance alliances to push back against an array of threats posed by Beijing.

Biden also stressed the need to maintain a “free and open Indo-Pacific,” a thinly veiled reference to Beijing’s growing military aggression in the South China Sea and elsewhere that has stoked international condemnation.

In other parts of the region, the Biden administration has worked to bolster partnerships to counter the Chinese regime, most notably the informal “Quad” grouping of Australia, Japan, India, and the United States. Biden will host the group’s first in-person leaders-level meeting at the White House on Sept. 24.