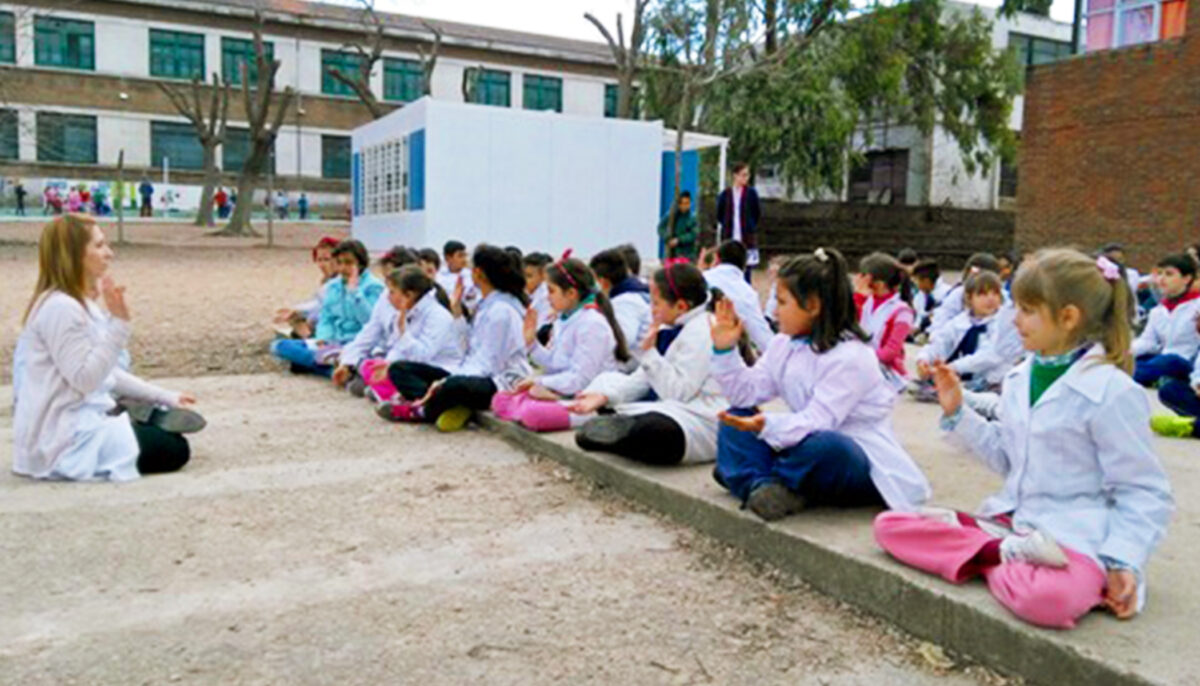 If you’ve ever stepped into a rowdy classroom, you’ve most likely come across students chatting, yawning, and even raising their voices. What should schools and teachers do to deal with rowdiness in the classroom?

To silence the noisy students, teachers employ methods such as ringing a call bell, rearranging students’ seating positions, or when all else fails, raising one’s voice—“Quiet!”

One state school in Montevideo, Uruguay, which had been facing disciplinary challenges with its students, decided to adopt an alternate approach—practicing mindfulness.

In March 2016, the school initiated a project with the aim to create a calmer atmosphere in the classroom, prevent bullying, violence, and improve student performance. The project required each teacher to come up with something that would help build a culture of peaceful coexistence in each classroom.

Sixth-grade teacher Yennyfer Quartino came up with an idea to introduce the ancient mind-body cultivation practice of Falun Dafa (also known as Falun Gong) to her students, aged between 11 and 14 years old.

Quartino taught her students Falun Dafa’s slow-moving exercises and sitting meditation daily in the school courtyard after lunch and before the afternoon classes. A few weeks later, many students from other classes joined Quartino’s students to learn the practice too. Eventually, almost the entire school was practicing Falun Dafa daily, a Minghui.org report states.

As time went by, the students learned more about the universal values of “Truthfulness, Compassion, and Forbearance”—the core principles of Falun Dafa practice—and gradually, the regular practice of these moral ethics improved the students’ behavior and shaped the school atmosphere.

“The school day is long,” Quartino said, reports Minghui.org. “Many students were tired, had no energy, and couldn’t focus on their classwork.”

“This year we decided to try something different, which is Falun Dafa, and the results have been wonderful,” she added.

The students—who used to suffer from fatigue, a lack of concentration, and poor academic performance, not to mention quite a few resorting to violence—have become more focused and tranquil in class.

The headmistress noticed the students’ improvement as well. She said: “They benefited not only physically, but spiritually. They breathe and relax and come to the classroom focused and with a good attitude.”

“These kids had serious concentration problems and were violent in the classroom. The changes they’ve made are soul-stirring,” the school inspector said.

Josefina, a sixth-grade student, said: “I feel relaxed, I like it. And afterward, when we go to the classroom, I feel as if all the stress I had before practicing Falun Dafa is gone.”

“I feel more relaxed and free,” said a third-grade girl.

A fourth-grade boy chimed in, “I feel a lot of energy.”

The simple practice of mindfulness along with teaching children how to control their own behavior in line with good moral values paved the way for positive improvements in the overall school environment. After practicing Falun Dafa, the students began adhering to the principles of Truthfulness, Compassion, and Forbearance in daily life. They learned how to look within to find where they fall short and correct themselves instead of blaming others (looking outside).

The students have experienced peace and self-control, and this, in turn, helps foster a healthy, kind, and tolerant learning environment.

“Before, everyone was bad tempered, but now we are calmer,” said Joaquín, a sixth-grader.

It is not the first time for any school to be positively influenced by this ancient meditation practice. The students at the Guasave Montessori School in Mexico are also practicing Falun Dafa. More schools in South America, India, and around the world are introducing their students to this peaceful practice in order to strengthen the upright school culture and learning environment.

Watch the video to learn about the positive changes students at the Guasave Montessori School underwent after learning Falun Dafa: