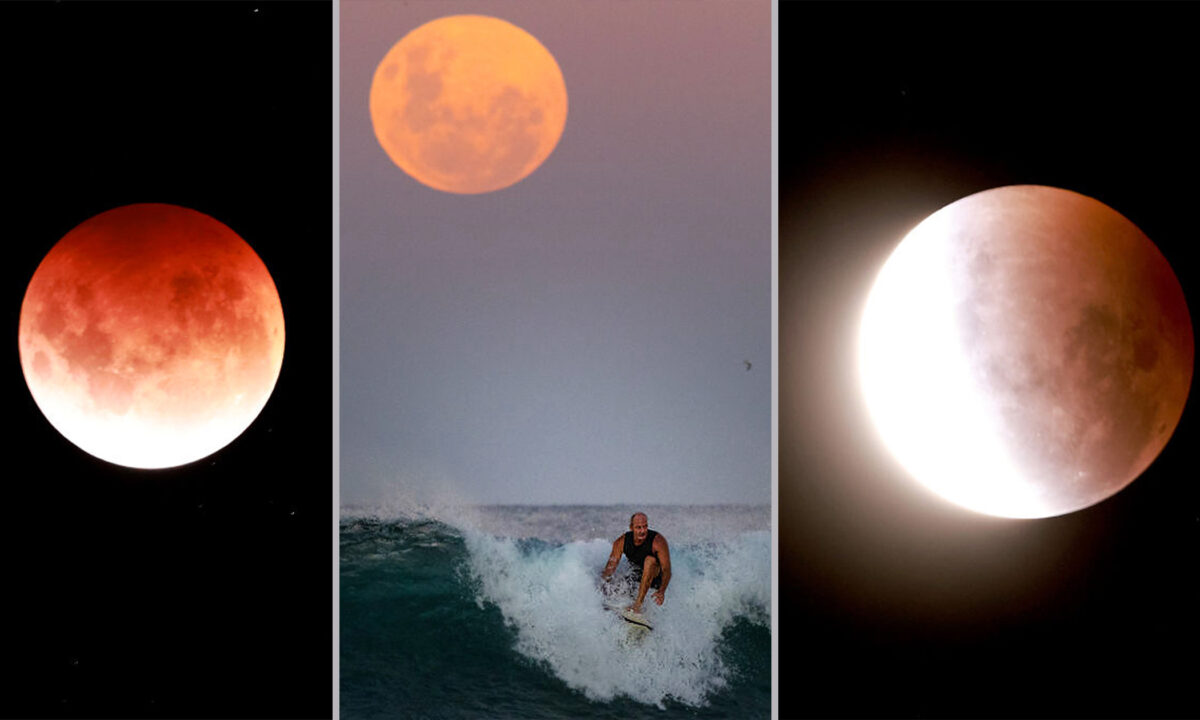 Early Wednesday morning, both sides of the Pacific witnessed an extraordinary celestial sight of notable rarity, when the largest supermoon of 2021 coincided with a total lunar eclipse.

During the stellar spectacle, a deep reddish glow was cast upon the lunar disc due to an atmospheric effect—a phenomenon which gives rise to the moniker: Super Blood Moon.

From Australia and eastern parts of Asia, all the way across the Pacific, to parts of the western Americas, skywatchers took in the cosmic display and captured some remarkable photographs to show for it.

The best seats for viewing were in Australia, New Zealand, Papua New Guinea, and on islands throughout the Pacific such as Hawaii—where observers were privy to behold the total eclipse, or “blood moon.”

A total eclipse occurs when the Moon passes directly through the Earth’s shadow (within the “umbra” range) and is covered by the shadow completely. When this happens, the Moon takes on a rust-red hue as sunlight, filtered through the Earth’s atmosphere, casts a warm glow upon the satellite’s surface—literally the glow of every sunrise and sunset on Earth contributing to the effect.

At the very middle of the three-hour umbra phase, the total eclipse itself lasted around 16 show-stopping minutes.

Beachgoers in Australia were particularly fortunate to experience clear skies; and photography yielded some stunning shots.

Observers in some other parts of the world got to watch only the partial eclipse phases, where the Moon is only partly covered by the Earth’s shadow.

Fueling the drama, the Moon appeared slightly larger than is usual, it being at its closest point to the Earth (or perigee) along its elliptical orbit. This phenomenon is what’s called a “supermoon,” which can appear 7 percent larger than a regular full moon—though the casual observer might not even notice.

For those in the United States, the rare event marked the first total lunar eclipse in two years; however, the skies were partially obscured by clouds in areas, limiting visibility.

Observatories in both the United States and Australia hosted webcasts during the Super Blood Moon (also called the Super Flower Moon, after the flowering season in which it occurs).

Stargazers will be able to catch the next supermoon (called the Super Strawberry Moon) on June 24, 2021; while the next partial lunar eclipse will occur on Nov. 19, 2021. The next total lunar eclipse won’t occur until May 16, 2022. Meanwhile, moon watchers will have to wait 12 more years before another blood moon and supermoon coincide.