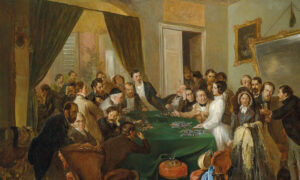 Mary, a professor at Rider University who did not give her last name, works in the Department of Education. She says she found the show to be “wonderful.”

“I found it very enjoyable, very colorful, very interesting,” she said. “I appreciate the explanations as they go along. It's really wonderful.”

She said she particularly enjoyed the singing.

“[My] father was an opera singer, so we enjoy when we hear that type of music, but we felt the performers did an excellent job.”

Shen Yun seeks to bring out "literally thousands of years of art and civilization" through each performance, according to the program book. The dancer requires rigorous and extensive training in order to master the forms.

Doug Major, a graphic designer, and Jennifer Toneck, the Vice President for the non-profit Times Square Alliance, both enjoyed the dancing in the show.

“I just like the way it looked and the sound of it,” said Mr. Major. “I'm just enjoying it.”

For Ms. Toneck, one performance in particular caught her eye—and ear, [i]In a Miao Village[/i]. The Miao are one of China's oldest ethnic groups and dancers perform a Miao dance with elaborate headdresses and ornate silver jewelery.

“I just thought that visually it was nice but also the sound that goes with it was nice, and I felt like it was uplifting,” said Ms. Toneck. “The feeling that it gave me—the sound of the bells on their necklaces jingling and the style of the dance.”

With reporting by Mike Chen.