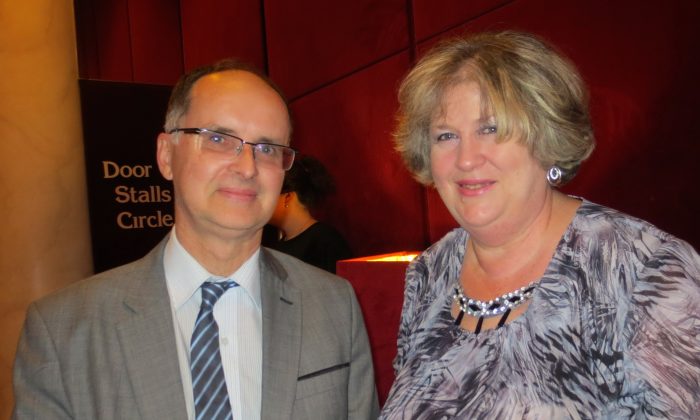 Among the audience was Dr. Deborah Jackson, a university lecturer in mathematics and statistics, who attended the show with her husband Clive Jackson.

Dr. Jackson says she was enthralled by the splendor she saw on stage. “I love the costumes and I love the way they dance, especially the ladies. It’s so beautiful and so pretty to watch.”

According to the company’s website, Shen Yun “weaves a wondrous tapestry of heavenly realms, ancient legends, and modern heroic tales, taking [the audience] on a journey through 5,000 years of Chinese culture.”

Dr. Jackson praised the beauty and serenity of the show, saying it holds an important message for all people. “It’s a lovely journey,” said Dr. Jackson. “The peacefulness of the whole show … [Looking for] truth and happiness—it’s a lovely message.”

Mr. Jackson, an urban planner, was impressed by Shen Yun’s revival of ancient culture. Through dance, song and live orchestral music, the performance brings to life legends and heroes from China’s long and rich history.

In particular, Mr. Jackson says he enjoyed the Mongolian Chopsticks dance, in which the performers use chopsticks “to create a crisp, staccato beat that quickens the blood and stirs the heart”, according to the program book. “Alternating between fast, furious footwork and long, extended arm movements, Mongolian dance is a vivid testament to free-spirited vitality and boundless, expansive expression.”

The synchronicity of the dancers and their striking costumers were some of Mr. Jackson’s favourite elements. “They were all in unison, it was all to the music—it was extremely well done,” he said.
“And the costumes were quite beautiful.”

‘The costumes are so lovely’

Also in the audience was Sabrina Schlosser, an assistant retail manager. She says she was impressed with the performers’ costumes. “The costumes are so lovely,” she said, adding that the performance “is so rich!”

According to the Shen Yun website, “Every costume in a Shen Yun performance is presented with brilliant colors, displaying a splendid spectacle … Every detail is given meticulous attention and is a result of artistic inspiration and careful polishing.”

“I feel like it’s a big fantasy, like you’re just going into this magical place. It’s beautiful,” Ms. Schlosser said.

After hearing about Shen Yun for six years, Ms. Schlosser said she was happy to finally have the opportunity to see them perform. “It has just blown me away—it’s just beautiful,” she said, adding that she will be returning to see next year’s performance.