Attends performance twice in one weekend 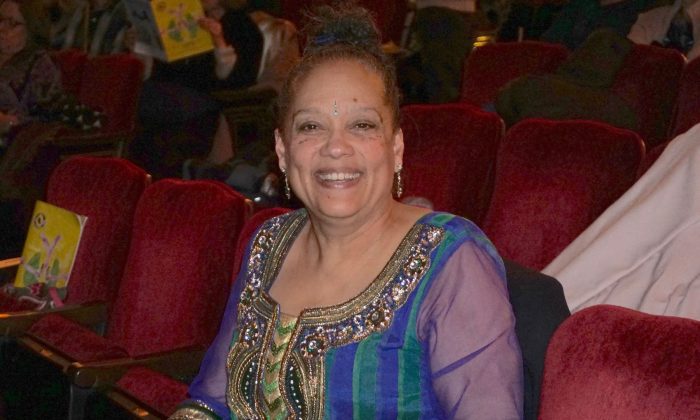 Dr. Mari Ann Graham enjoyed Shen Yun Performing Arts so much on Friday, Feb. 19, she returned on Sunday to the Orpheum Theatre to see it again. (Sally Sun/Epoch Times)

MINNEAPOLIS—It wasn’t deja vu. But there was something almost reminiscent in the feeling Dr. Mari Ann Graham got in seeing Shen Yun Performing Arts.

“It feels very ancient and, on some level, like we all could connect to it, if we wanted to,” said Dr. Graham, an associate professor at the University of St. Thomas, on Feb. 21 at the Orpheum Theatre.

Dr. Graham was so moved in seeing the performance Friday night that she had returned on Sunday to catch the matinee of the traditional music and dance company. “I’m enjoying it as much the second time as I did the first time,” she said.

This may be unusual, because the China most people have in their minds is the post-Cultural Revolution China. “Remember the Olympics?” she said, explaining the tremendous level of commitment the world saw in those acrobats. People saw rigorous training and discipline. But in Shen Yun, there was that level of dedication plus she could “feel the spirituality in all of that.”

And that is the authenticity in culture New York-based Shen Yun has stated it seeks to revive. The traditional Chinese culture is believed to be divinely inspired; the Chinese characters, art, and even attire were just some things imparted to the civilization or inspired by the gods in some way or form.

“It’s certainly promoting in a positive way, the Chinese history, and we know so little about it in our country,” she said. “It’s absolutely spectacular. Really. “