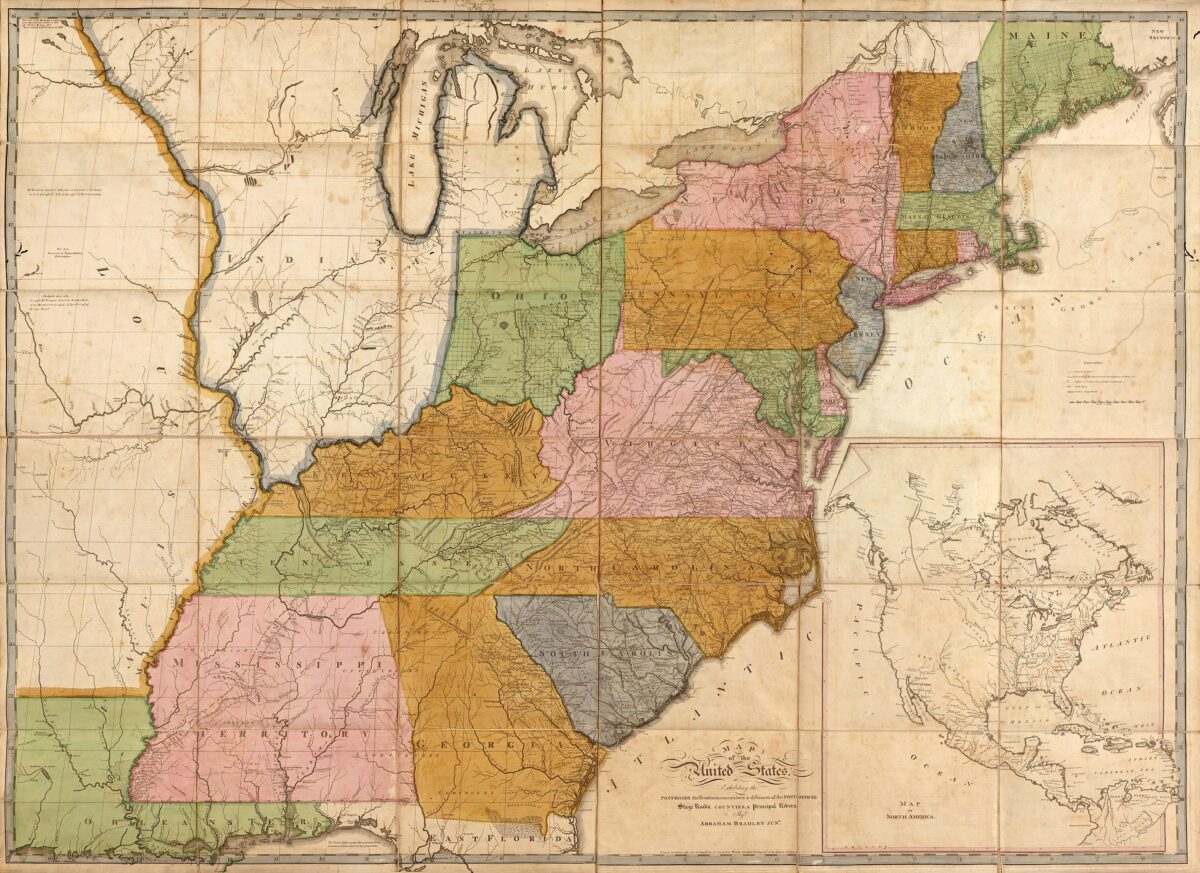 United We Stand: How Benjamin Franklin’s Revolutionary Postal System Banded the 13 Colonies Together

Franklin revolutionized mail delivery in the 13 Colonies, making for better communication among them as they ultimately formed a nation together
BY Allen Shoff TIMEJune 24, 2022 PRINT

Benjamin Franklin ranks among the most popular of the Founding Fathers, and for good reason: He was a larger-than-life scientist, inventor, diplomat, and above all, cunning politician and staunch advocate for the right of Americans to cast off British shackles and chart their own course. But beyond his inventions, his advocacy as delegate to the Second Continental Congress, or his famous and quotable wit, one achievement affects the daily lives of modern Americans more than any other: as postmaster general of the Colonies and, later, the first postmaster general of a fledgling United States of America. By revolutionizing the system of mail delivery, he, perhaps more than any other, united the men and women of the Thirteen Colonies through the power of the written letter.

The situation facing these two stalwart men was dire. From southern Georgia to the most northerly reaches of Massachusetts stretched well over 1,000 miles as the crow flies, yet the point-to-point distance scarcely begins to describe the magnitude of the task. A single rider on horseback with a light load could make 20 to 30 miles in a day—at that speed, a good rider would need more than a month to traverse the Colonies from north to south, even granting the most favorable conditions. Yet in practice, journeys by land could take even longer, as roads connecting the Colonies were haphazard, narrow, and in places little more than game trails. For the colonial towns and villages clustered on the seacoast or alongside rivers accessible by ship, fulfilling the colonial postal needs by sea was infeasible due to the high cost of transport. Complicating matters, the tremendous population growth of the American Colonies had towns springing up even farther inland, away from sea routes. The system needed a complete overhaul.

Franklin, directly responsible for the colonies from Pennsylvania up to the British holdings in Canada, including the island of Newfoundland, set to the task immediately. He established the first regular mail service to Newfoundland in 1755, dramatically increased the speed of delivery by hiring riders to travel both day and night, and established numerous cost-saving measures, including a new system of standardized bookkeeping that made it possible for auditors to detect and combat local corruption. His experience with the previous postmaster of Philadelphia banning his paper for his own profit taught Franklin the virtue of a free press, and he insisted that any newspaper be delivered by the postal system for only a small fee. He developed his own version of the odometer, strapped it to the hubs of his carriage wheels, and measured out the most efficient routes between Post Offices; he reportedly traveled more than 1,600 miles. This road and route survey revolutionized the delivery of mail in the United States. By concentrating resources on the most critical routes among the major cities of New York, Philadelphia, and Boston, the speed of mail delivery increased dramatically, and the postal service registered its first-ever profit in 1760.

As the flames of revolution began to rise, his well-known sympathies with the aggrieved Colonies ended his 21 years of service to the Crown in 1774. The Second Continental Congress, recognizing both his public image as a respected man of science and his tremendous wealth of knowledge of the postal system, immediately appointed Franklin the first postmaster general of what is now called the United States Postal Service on July 26, 1775. Although his tenure as the first postmaster general lasted a mere year—he soon left the post for Paris to secure French aid to the Colonies in their revolutionary struggle—he ratified the measures he had developed as the postmaster general of the Crown and set the new country’s system on proper footing. His pioneering efforts to establish a streamlined, efficient postal service, focused on critical infrastructure, can be seen in the Constitution itself. Among the Article 1, Section 8, powers afforded to Congress in the Constitution is the power “to establish Post Offices and post Roads.”

The famous Postman’s Creed, inscribed on New York’s General Post Office Building, alludes to a passage describing the imperial courier service of Persia in Herodotus’s “Histories,” but the familiar words are inextricably entwined with the American postal system: “Neither snow nor rain nor heat nor gloom of night stays these couriers from the swift completion of their appointed rounds.” While penned by an ancient Greek about the personal delivery service of an imperial autocrat, Benjamin Franklin made those words a reality for the common citizens of the United States of America.

The Founding Fathers were famous men of letters; Franklin’s postal workers delivered those letters from one end of the Colonies to the other. When tea filled Boston Harbor, shots rang out at Lexington and Concord, and brave farmers turned back hardened British regulars at Bunker Hill, it was Franklin’s postal system that allowed the Colonies to experience these events with unprecedented speed. It was this service to the fledgling country, perhaps more than any other in Franklin’s long and lauded career, that gave the United States a precious gift: As the Colonies fought—and won—their long struggle against tyranny, they did so together.