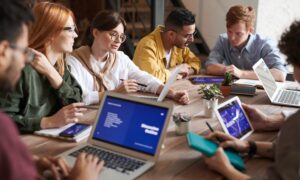 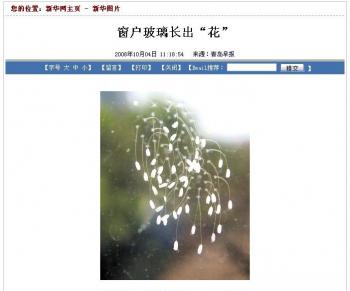 According to the report, 47 such little flowers were seen growing on the glass of an office building window in Qingdao City.

“It’s amazing that flowers can grow on glass, isn’t it!” marveled one of the company employees, who guessed they might be udumbara flowers

A reporter confirmed that little white flowers were standing on window glass on the east side of the company’s second-floor office. There were 47 of them, 1 millimeter in diameter and white in color, with bell-shaped flowers and wire-thin stems.

The flower stems were connected to the glass with no soil found in between.

One company employee said, “When we first saw them, we didn’t know what they were.  We even thought they were dirt smear, and we almost wiped them off with a piece of cloth.” A manager, excited when seeing the flowers, said, “This is probably the legendary udumbara.”

The reporter covering the story searched online, finding that similar flowers were spotted in other places too. The flowers discovered at this company looked very similar to the photos of undumbara found elsewhere.

Last year, Daqing Evening, a local newspaper in northeastern China, ran a special report on the findings of the flower, and invited specialists to authenticate them.

The author of the report said that several experts and scholars interviewed were unable to identify the origin and name of the flower. Through observation under microscope, specialists concluded that they were not worm eggs, as suggested by some media in China.

While specialists failed to come up with any explanation, documentations of the rare flowers appeared more than once in Buddhist sutras. According to one such ancient document, Fahuawenju/sishang, “undumbara is a miraculous flower which blossoms once every 3000 years, when the King of Gold Wheel appears.”

“Undumbara” is Sanskrit for “lucky flower” or “levitating flower.”

Photographers over the years have taken close-up shots of such flowers, and some even caught the petals in full blossom.

In October last year, a Houston resident, Mr. Lin, noted dozens of undumbara on the leaves of his red bamboo plants at home. With the help of a biologist, an Epoch Times photographer took a series of photos of the undumbara, in which the flowers’ petals and pistils were clearly visible. [caption id=”attachment_74743″ align=”alignleft” width=”320″ caption=”One of the undumbara found at Mr. Lin