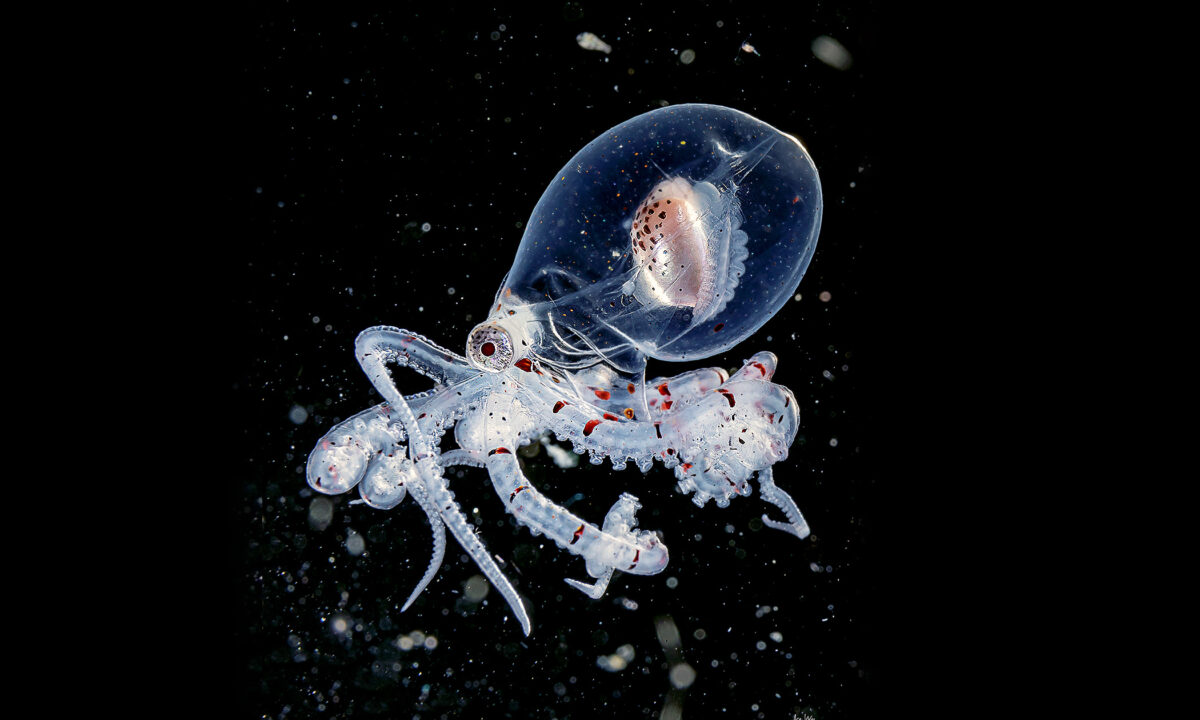 Surrounded by obsidian waters in all directions, dive photographer Wu Yung-sen is momentarily cast in limbo, with neither earth nor sky to place him anywhere. Yet, that dark, scary void engulfing him is thick with life. Yung-sen calls these black waters the “ultimate diver’s frontier,” his chosen artistic domain.

Yung-sen’s exotic photography of wildly strange deep-sea life takes him to obscure locales, and lets us peer into the ocean’s sunless world. Here, he encounters glass-eyed sharks, transparent octopuses, and wispy jellyfish. Gossamer schools and helical eels call this home, though they are rarely seen by heads above water. Yung-sen unveils all these underwater treasures through his lens.

The 46-year-old Taiwanese resident of Ho Chi Minh City, Vietnam, does not photograph on land. His shots are all taken below the waterline, or somewhere on it. It started with a desire to share his travels with family; the self-taught photographer purchased his first camera years ago and wanted to take photos underwater. He wanted to show others what he was seeing, though he had zero experience with underwater photography then.

Ten years of practice transformed the once fledgling photographer into a pro. In 2015, Yung-sen took his work to a new level by trying blackwater diving — essentially open-ocean diving and photography in waters too deep to see the bottom. Using a down line and lighting, one can attract underwater creatures, which presented Yung-sen prime territories to explore.

“The purpose is to explore an unfamiliar new world, to find life and new species in the vast sea, and to show the little-known side of creatures,” he said.

According to Yung-sen, capturing photos while blackwater diving requires four elements: neutral buoyancy, enabling the diver to move laterally without sinking or rising; an experienced diving center; reliable equipment, which includes suitable lights; and, last but not least, “waiting.”

The majority of his photography is spent performing this last requisite — and observing.

The time spent watching is paid back with the encounter, when it finally comes, and Yung-sen is able to “grasp the demeanor” of the creature he captures.

“Generally speaking, natural photography is rather dull,” he said. “How to take a photo that everyone can understand is the most important topic for me. As a diver, these sea creatures are all too familiar to me. How to let the general public, who have never been in the water, understand this picture is the real problem of underwater photography.”

To accomplish this objective, his underwater shots require beyond two-dimensional perception.

“Using a normal cameral (a special waterproof case) and an underwater flash to take pictures, you not only need to know how to take pictures, but you must also be able to dive, and then have a certain ability to protect yourself and general knowledge of the marine life,” Yung-sen said.

“Strictly speaking, it is the sum of all experience, so it will not be [using] a single skill.”

“Only when you are in a safe state can you concentrate on shooting, so the biggest key [issue] is the equipment,” he added.

Besides the skillsets and tools of the trade, a keen spatial awareness helps make a successful shoot. Before Yung-sen presses the shutter, he tries to jump out of his own viewpoint and consider the shot from a third party’s angle. In underwater photography, that view is always in flux.

“The thing that attracts me the most is the ever-changing underwater ecology,” he said. “Due to different times, a same place can have many different scenes.”

Besides this brand-new frontier, which currently has Yung-sen enraptured, many memorable shots were taken by him in sunkissed waters near land. He shared that his “most unforgettable” photos were of the goliath grouper, a fish bigger than he is, in Cuba in 2019.

“It took the initiative to approach me and wanted to be very close to me,” he shared. “I was very scared at the time, because I had seen groupers eating sharks.”

Other amazing pictures captured migrating salmon in Canada’s 6-degree-Celsius rivers and aggressive wild American saltwater crocodiles, which Yung-sen took in 2018. The adventure is endless. And so, it seems, is the work.

While he usually spends most of his time shooting away from Taiwan, things have been different this year. Lately, due to “God’s blessing,” he has been spending his time photographing all of Taiwan’s oceans, particularly off Orchid Island.

“Taiwan is one of the countries that is fully functioning,” he said. “My friends are so envious that I can still shoot under the sea normally.”

His overseas photography schedule ground to a halt this year due to the pandemic, though Yung-sen hopes things will return to normal next year. Far-off reaches of the deep, dark seas await.