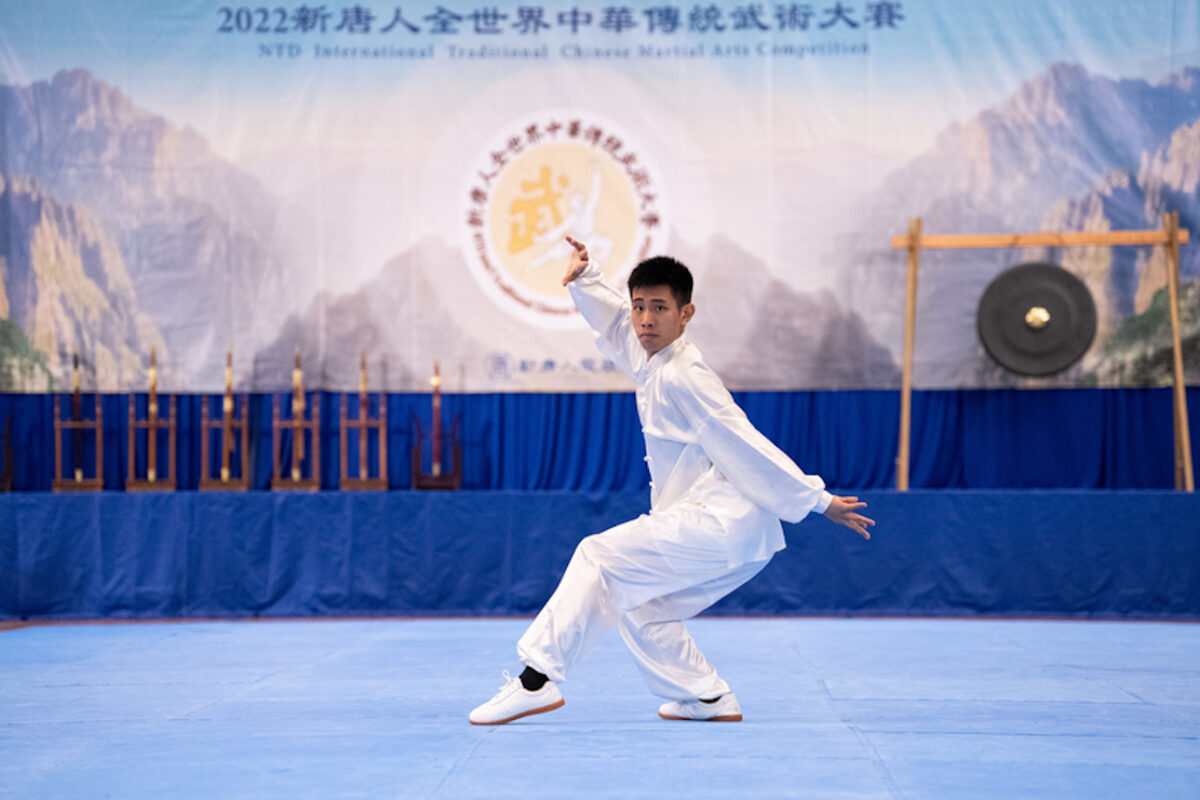 More than 70 contestants, from as far as Taiwan, joined NTD’s 7th International Traditional Chinese Martial Arts Competition, which was held in Middletown, New York, from Aug. 25 to Aug. 28.

Wang Guolong, who demonstrated the use of the Praying Mantis Two-handed Sword during the competition, said he hopes to further improve himself by sharing with other martial artists.

More importantly, it was the unique focus of the competition—virtue and tradition—that prompted him to attend. The competition, part of a series of international culture and arts events organized by NTD Television Network, aims to revive traditional Chinese martial arts and display its true values to the world.

After he started in 1983, Wang said his focus in the early years was on learning the techniques and developing the skills.

“The result was [I] became arrogant as [my] physical body became stronger,” he said.

Then, he got a wake-up call from his master.

“Practicing martial arts, the first thing to learn is martial virtue,” Wang recounted his master’s words. “Practicing only the techniques without gaining enlightenment from the culture [behind the movements], all the efforts will be in vain.”

Martial arts, as part of 5,000 years of Chinese tradition, were initially derived from Taoism, a spiritual practice that is closely related to personal cultivation and self-improvement.

Therefore, central to martial arts is the concept of martial virtue, called “wu de” in Chinese. This taps the spiritual marrow of traditional martial arts, and is used only to defend against injustice, and not for aggression.

The China-born contestant said he now prefers to describe himself as a practitioner of “martial arts virtue,” instead of a martial artist.

For bronze medalist Megan Westerman, the gentle movements of ancient Chinese martial arts bring her a focused spirit and a peaceful mind.

“Martial arts is like meditation in motion, and you will forget everything else [during the practice],” she said. “Sometimes we make mistakes because there is too much noise in our hearts.”

Though slow, Westerman felt the oldest forms existing contained the greatest energy during her 15 years of practice.

“What sets the traditional martial arts apart is each move has stories behind it and contains great power,” she said after demonstrating the Shaolin Twisting Spear.

Chris Chappell, who has practiced traditional martial arts since youth, said he also felt the strength of peace.

“I think the biggest lesson I’ve learned, particularly from Chinese style traditional martial arts, is they have a saying, you know, ‘the soft overcomes the heart,’” Chappell, who won an Honorable Mention award, told NTD.

“I think a lot of times in life, we learn anger or rage. Those are, you know, a type of strength that we can use to get through hard times, but it’s a very dangerous emotion because then it can turn on people closest to you [like] family and friends,” Chappell, also the host of China Uncensored, said. “But in Chinese martial arts, you learn that strength can come through tranquility and peace, and that’s a much bigger, broader form of strength.”

“It’s unfortunate no one was qualified for the gold medal this year,“ Li Youfu, head judge at the competition, said during a seminar after the awarding ceremony.

The judging panel is looking for authentic martial arts, called “wushu” in Chinese. But in the present, genuine wushu lost much of their original character after decades of ideological repression and commercialization, according to Li.

During the Cultural Revolution in the 1960s and 1970s, traditional wushu masters were persecuted and marginalized by the Chinese Communist Party, causing it to become out of touch with its origins.

The practice of wushu was further degraded as commercial interests crept in, encouraging an emphasis on flashy superficial movements at the expense of ancient subtlety.

“People lost the real Kung Fu when pay too much attention on fame and interest,” Li told competitors.

According to this renowned master from Beijing, the modern forms of Wushu have been mixed with moves from other disciplines and lost the martial virtue, the fundamental properties of the divinely imparted culture.

Holding the strict competition standard and leaving the gold medal unawarded, Li said, are intended to encourage practitioners to improve themselves and understand the essence of traditional Chinese martial arts when they practice.

Competitors, however, said that losing or winning is not what is paramount, given the valuable experience they obtained.

“The friendship among competitors is so important. Although we are competing, we really hope that the others will win,” said Daniel Hernandez, who won an Honorable Mention award. “This is the powerful part of the event and it is of great importance for me.”

Brandon Chin, the first-time attendee, said he has fallen in love with the event.

“Competitors here are like a family. We compete and also cooperate together,” said Chin. “[I] cherish traditional martial arts more.”