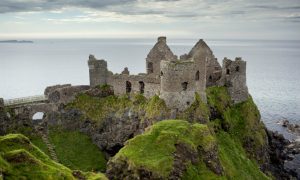 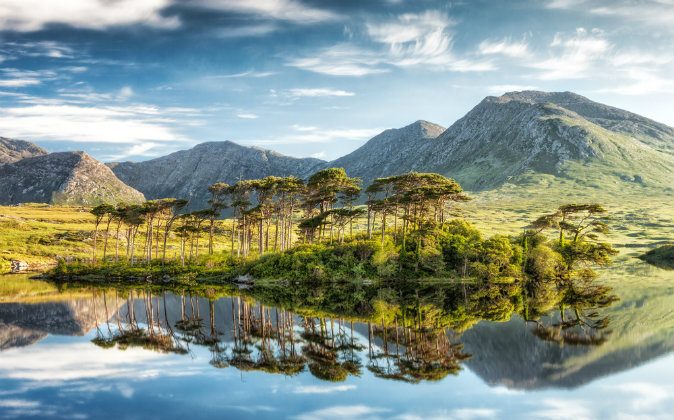 Derryclare Lough, Connemara mountains in the background in Ireland via Shutterstock*
Destinations

Underrated Places to Visit in the Emerald Isle

Emma Clair Kelly shares with us her favourite beautiful places to visit in Ireland, which – so far – have remained firmly off the tourist radar….

There  is a reason why so many directors race to Ireland for a whole host of movie locations. Okay I maybe be biased because this is my home country, but Ireland is a place where beauty and history lurk around every corner, from the perfectly preserved Victorian streets of the capital city of Dublin or the purple, glowing wilderness of Sligo immortalised by Yeats in ‘The Lake Isle of Innisfree’ to the famous barren Burren or craggy cliffs of Donegal. There are plenty of ferries to Ireland so whether you chose a weekend of culture in the vibrant cities of Cork, Galway or Dublin or an activity break in one of the many surfing or walking locations around the country, you are bound to be amazed by the breath-taking scenery and the unrivalled friendliness of the Irish people you encounter.

But here’s the inside scéal, if you’re looking for a true Irish experience loaded with the famous Cead Mile Failte, Craic agus Ceol (hundred thousand welcomes, fun and music) and not to mention Guinness!

Wexford, is known to Irish people as the sunny south east even when the famous Irish rain falls elsewhere. The county is renowned for its friendliness and stunning coastline, but one of the most beautiful sites in Wexford is Tintern Abbey located south of the town of New Ross, it is certainly worth a visit. Founded in 1200 and named after Tintern Abbey in Wales, it is a place of reflection, relaxation and peace to this day. Consisting of a nave, chapel and cloister, it is a stunning example of gothic architecture against a striking lush green backdrop. After spending an afternoon walking around the abbey grounds, visit the town of New Ross or Wexford for a pint or a local lunch.

Venture further inland to the historical site of the Rock of Cashel. Cashel is reputed to be the site of the conversion of the Celtic kings by St. Patrick and was the seat of the Munster kings for centuries. However, aside from that, it is one of the most impressive collections of Celtic art and medieval architecture in Europe. The oldest and tallest building is the round tower, which, dates back to the 11th century but site was added throughout the centuries and other buildings date back to the 12th  and 13th century. The site is of huge cultural and historical significance with many important events of Irish history taking place there.

Located on the south coast of Ireland, the historical city of Waterford is one of Ireland’s oldest cities, reputed to have been founded by the Vikings traders in 914 and has been loaded with medieval flavour and riverside bustle ever since. It is also home to the exquisite Museum of Treasures which tells the intriguing and captivating 1000+ year story of the city. A visit to the House of Crystal is also a must which, gives the history of the beautiful Waterford Crystal crafts with a unique chance to see the glassblowers producing the world famous crystal products by hand (or mouth!).

After the bustle of Waterford, take it easy in the stunning, quiet fishing village of Kinsale in County Cork- colloquially known as the Rebel county! It is the eponymous historical site of the Battle of Kinsale which, was the last stand by the Irish Chieftans against the invading English army but now, it is the home to a postcard pretty town and a variety of activities to suit every tourist, from horse-riding, to walking and fishing tours to food festivals and a wine museum! Cork’s coastline is dotted with picturesque, quaint fishing villages like Youghal and Cobh and the renowned Fota Island which, is known for its golf course and wildlife park.

Following the Cork coastline into the county of Kerry- known as the Kingdom, you will encounter the famous Ring of Kerry coast road, the seaside town of Dingle and take a boat ride to try catch a glimpse of the friendly dolphin Fungi but a commonly forgotten tourist site is ‘Sceilig Mhichíl’. ‘Sceilig Mhichíl’ is a craggy island outcrop in the wild Atlantic Ocean and has been declared a UNESCO heritage site since 1996. Life on the island began in the 6th century as a group of peace and tranquillity seeking, intrepid monks moved to the island, built a monastery and lived there to devote their lives to God, in the harshest conditions in Ireland. The site is so precious, that only 13 licences are granted each summer to the rock for visitors to explore the site in small numbers, but there are also exceptional dive sites located immediately around the rock which are beautiful, for those interested with being more adventurous.

Copyright © 2015 by Global Grasshopper. This article was written by Emma Clair Kelly and originally published on globalgrasshopper.com.

*Image of Derryclare Lough, Connemara mountains in the background in Ireland via Shutterstock

*Image of Kinsale harbour via Shutterstock