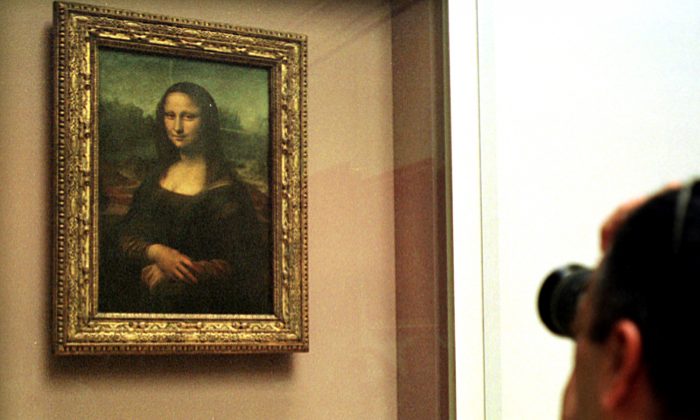 A man takes a photograph of The Mona Lisa painting, behind a protective glass, in the Louvre museum in Paris in a Monday April 26, 2004 file photo. (AP Photo/Amel Pain, File)
Arts & Culture

The Mona Lisa, one of the most famous works of art in history, may have more than one hidden portraits underneath.

The method involves a multispectral camera projecting intense lights on to the painting while measuring the reflections, helping look for what happened between the paint layers.

“My scientific imagery technique takes us into the heart of the paint-layers of the world’s most famous picture and reveals secrets that have remained hidden for 500 years,” Cotte said in a statement. “The results shatter many myths and alter our vision of Leonardo’s masterpiece forever.”

Cotte believes one of the hidden portraits is the actual painting of Lisa del Giocondo, the woman thought to be portrayed in the Mona Lisa.

Art historian Andrew Graham-Dixon, who made a BBC documentary about the discovery, says the discovery will change history.

“It’s jawdropping,” he told CNN. “The Louvre are going to have to change their label.”

A French scientist has spent more than 10 years analysing the Mona Lisa, Leonardo da Vinci’s masterpiece. Now with his latest research he claims he has found another portrait of a different woman underneath – claims which are prompting controversy in the art world. Watch more: bbc.in/monalisa #BBCShorts @BBCNews #MonaLisa #Louvre #HiddenPortrait #Art #LeonardoDaVinci

The museum declined to comment on the alleged find to the BBC, but not everyone is on board yet.

“There are considerable changes during the course of the making of the portrait–as is the case with most of Leonardo’s paintings,” art historian Martin Kemp said.

“I prefer to see a fluid evolution from a relatively straightforward portrait of a Florentine women into a philosophical and poetic picture that has a universal dimension.”

The findings were announced on December 8, and will be included in an exhibition that opens in Shanghai this week titled Da Vinci – The Genius.

The documentary will air on BBC Two on December 9.