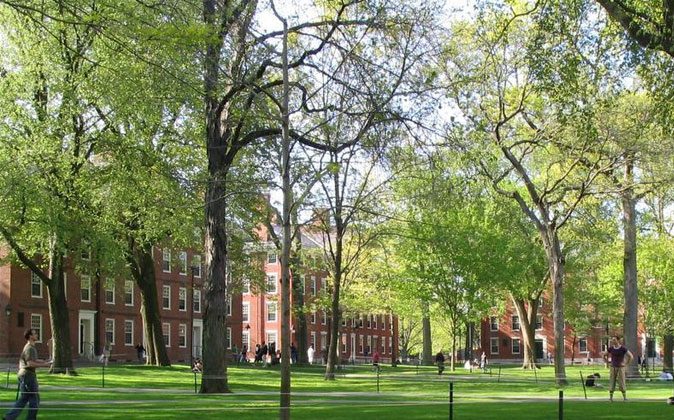 How do you get a bunch of middle school kids interested in science and nutrition? Disguise your goal as a pizza.

Harvard College juniors Marina Chen and Bonnie Lei hit upon the idea of taking on one of the more daunting classroom challenges — encouraging education in science, technology, engineering, and math — while sitting in the dining hall at Kirkland House talking about food and one of their favorite courses, “Science & Cooking.”

The School of Engineering and Applied Sciences’ (SEAS) wildly popular course hosts renowned chefs such as Ferran Adrià and David Chang to discuss and demonstrate scientific principles such as spherification and fermentation as they occur in restaurant kitchens, engaging students who might not necessarily think of themselves as “science people.”

Chen, a baking enthusiast, and Lei, who spent a semester studying the genetic underpinnings for the microbial terroir of cheeses at the Dutton Lab at the FAS Center for Systems Biology, immediately saw the course’s potential to reach even younger students through the international language of food. So when SEAS began a two-week summer program for middle school children in 2012, the pair approached the faculty about extending that trial.

Thus was born “Food Lab for Kids,” a weekly after-school version of “Science & Cooking” for fourth through eighth graders in Cambridge at the Area IV Youth Center near Central Square and at the Russell Youth Community Center in Fresh Pond. Chen and Lei do the curriculum and teaching, along with a team of eight Harvard undergrads and two graduate students, and with help from a nutritionist from Whole Foods, which supplies course ingredients.

“I just remember when I was high school, or even middle school, that science was always something you read from a textbook and you saw some pictures of things,” said Lei, who studies organismic and evolutionary biology. “And when I was actually starting to work in a lab … I realized that most of the science was being able to think of all these different hypotheses, having that curiosity and then chasing it down, designing experiments … and that was something that in most of my science classes you never covered …

“I thought the things that I would do in the kitchen normally … were a really good analogue for what you would be doing in a science laboratory. It brought something that we could introduce to kids earlier on; then they wouldn’t be scared of science. It’s now something they could relate to.”

Pizza has proven to be a particularly popular subject through which to deliver scientific concepts.

In another class, a local cheesemaker showed how milk is transformed into cheese, and then guided students as they rolled and stretched curds into string cheese.

“A lot of the kids starting out were like, ‘We don’t like to eat cheese,’ ” she said, recalling a brief moment of panic before the teachers realized that most of the students knew cheese only as plastic-wrapped, gelatinous yellow slices, not as mozzarella or cheddar.

In the end, the experience made them converts.

“They really, really liked it. They ran around the entire youth center building to their friends [saying], ‘We made real cheese! This isn’t the fake stuff that you get in the supermarket!’ It was so much fun seeing them change from being, ‘No, I don’t eat cheese’ to, ‘Oh, my gosh, this is amazing,’” said Chen.

During a recent class, students played with Lego figures that represented protein strands, fats, complex carbohydrates, and simple sugars while they compared the composition and taste of various dairy and non-dairy milks and fruit juices. The students considered why some foods take longer than others to digest and talked about why coconut oil and the fat on barbecue ribs looks different after it has been refrigerated.

By the end of the seven-week program, students will develop their own research projects and present their findings.

Chen, who is studying economics, said the Food Lab has been a surprisingly two-way learning experience.

“At first, we were thinking ‘Oh, we’re going to go out and teach kids,’ but we realized we’ve learned a lot through this process, especially designing lesson plans, learning to control a middle school classroom. They’re easily distracted. You really have to get their attention and their respect,” she said. “Another thing that we learned was trying to hide this science and math component in what they were doing so it didn’t make them feel like they were doing more school.”

Now that the Food Lab is up and running, Chen and Lei are working to bring the concept to a wider audience. As residents at the Harvard Innovation Lab this semester, they took part in the i-lab’s cultural entrepreneurship program in January, meeting with Harvard Business School alumni and others from dozens of startups and other businesses in New York City. They connected with Blue Apron, the James Beard Foundation, and chef Daniel Boulud’s longtime business partner, Lili Lynton, to talk about developing their idea into a food-based company, so that they’re not just relying on Harvard students who can volunteer time to teach children.

“In the best-case, ideal scenario, we want to be able to have all kids regardless of location, regardless of circumstance, be able to be exposed to and to engage in science in a really accessible way and have a fun time doing it — and hopefully also be able to live healthier lifestyles,” said Lei.

This article was originally published at the Harvard Gazette.