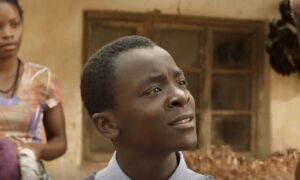 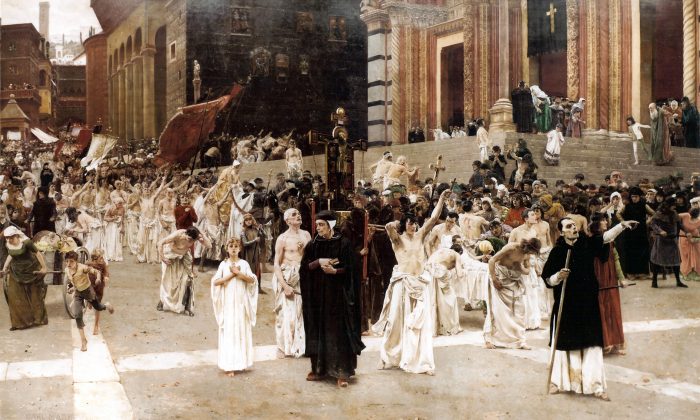 Uncertainty and the Plague: Carl Von Marr’s Painting ‘The Flagellants’

Terror gripped the kingdoms of Europe that had been overwhelmed by the misery and chaos following the bubonic and pneumonic plagues. Known as The Great Mortality, nearly a third of the population in Western Europe from 1347 to 1350 had fallen victim. Dogs and rats scurried the streets feasting on the unburied dead. Farmers fell victim, leaving their crops to rot in the fields. Famine soon followed in a society that depended upon successful harvests.

Tales were told of ships drifting aimlessly at sea with crews of corpses. Doctors tending the sick would catch the disease and die before their patients. There was even a held belief that one could spread the plague just by having eye contact with another person.

One must remember that in 14th century Europe, people were at a loss to explain what the plague actually was—or what caused it. The University of Paris at the time thought it occurred due to a planetary alignment of Saturn, Jupiter, and Mars. Others believed it was God’s wrath for their sins. Accusations flew and tempers flared as the church provided no immediate solution. People were faced with the unknown, and they wanted the scourge to end. They wanted answers.

In a reaction to the incapacity of the church to solve the crisis, people from all walks of life decided to band together and forsake worldly pursuits. Known as flagellants, they gathered in groups and roamed from city to city, whipping themselves bloody to prove their faith. Confusion had bred irrationality and thus the flagellants, a reaction to the venality and corruption of the church, took off.

By 1885, the plague had long run its course, leaving Carl Von Marr with subject material for his painting. Inspired by the historical accounts in the “History of the City of Rome,” by Ferdinand Gregorovius, Von Marr began his epic painting that measures nearly 14 feet tall by 24 feet wide. “The Flagellants” recalls a dark era in Western civilization and Carl Von Marr set the peculiar event in a life-size presentation.

Historical paintings were in vogue in Munich where Von Marr attended the Academy of Fine Arts as a student and, later, as a professor. Von Marr had done extensive research on the flagellants and 14th century Europe. He travelled to Italy to study its architecture and fashions of the time.

“The Flagellants” took nearly four years to complete and was executed on one massive canvas. The entire composition conveys the motion, and emotion, of the figures in the painting, all of which is beautifully rendered with exceptional detail. Von Marr, whose trademark was his remarkable ability to depict light, balances the tonal contrasts of the scene so the viewer can take in the whole picture without being overwhelmed.

The amount of preparatory work and logistics in executing the painting would have required Von Marr to draft hundreds of sketches and in several instances the artist employed the same model for multiple figures in the painting.

Graeme Reid, the director of collections and exhibitions at the Museum of Wisconsin Art poses this question to the children when giving tours: Who is leading the procession?

“There’s only one man on the horse in the scene. He is wearing a fancy gold robe. He looks very important. Who do you think is in charge here?” The children point to this or that figure in the foreground. Graeme believes that Von Marr might be illustrating that it wasn’t always the person at the top of the pyramid in terms of power who may be in charge.

In the lower center of the painting, a young girl stands mysteriously in a posture suggesting prayer. She may be representative of purity and rationality, unmoved and solemn amid the chaos around her. The girl is partly removed from the rest of the procession.

Why Von Marr chose to paint “The Flagellants” remains a mystery. Von Marr however, had survived the Bolshevik revolution in the Bavarian government. Due to his high social ranking, he fled to Switzerland to avoid persecution.

Von Marr had endeared himself all of his life to his students. Humility would have Von Marr shrug his shoulders at the near constant accolades presented to him during his lifetime. At the Museum of Wisconsin Artists in West Bend, Wisconsin, many of Von Marr’s paintings are housed in the collection and offer a visual legacy and insight into Von Marr and his works.

Tim Gebhart is an artist living in Wisconsin.