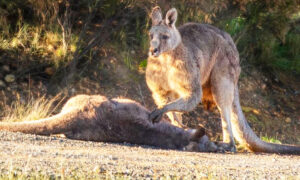 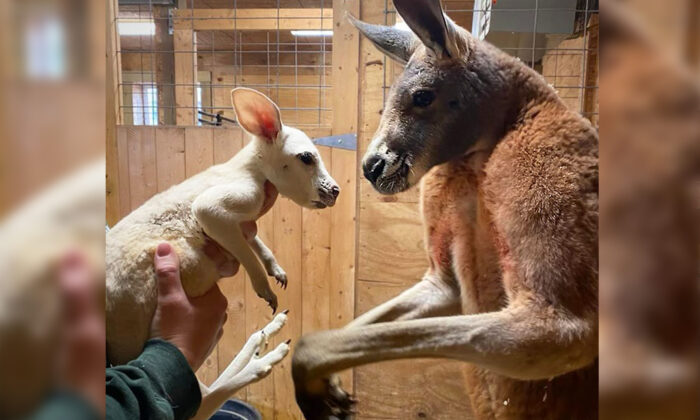 Ultra-Rare White Kangaroo Baby Born in New York Zoo, Possibly the First Ever in US

What could be the first-ever white kangaroo born in the United States entered the world at Animal Adventure Park in Harpursville, New York, in what experts are calling a rare genetic mutation of kangaroo DNA.

Several months ago, one of the park’s red kangaroos gave birth to the white baby kangaroo. However, the animal keepers were unaware of the baby’s incredibly rare white fur at the time; joeys are born about the size of a human thumbnail, according to the park, and most of their development takes place inside the mother’s pouch.

Thus, it takes roughly four to five months before the joey can be removed from the mother’s pouch for a medical exam. When caretakers pulled the little guy from his mom’s pouch for the first time, they were left astounded.

“Our jaws are on the floor!” Animal Adventure Park wrote on Facebook, sharing a picture of the little guy. “This is not your standard red kangaroo.”

To the average onlooker, the kangaroo may appear albino. However, the park owners say that Cosmo, as he was named, is actually leucistic. Leucism is a condition that results in partial loss of skin pigmentation, and unlike albinism, it does not affect pigmentation in the eyes.

“There is black color pigmentation in the eyes, therefore not your normally anticipated red-eyed albino mutation,” the park said.

Park owner Jordan Patch said that to their knowledge, this is the first-ever leucistic red kangaroo in the United States.

“We are not aware of any leucistic red kangaroo in the United States, indicating just how rare of an occurrence this is,” he told the Times Union. “We are now working with professionals in the zoological community to determine just how unique of a blessing this little one is!”

According to the park, Cosmo is the offspring of Boomer and Rosie, who arrived at the park last year. They suspect that the parents’ genetic combination is what led to Cosmo’s coloring.

“A surprise to us all,” they wrote on Facebook. “What a remarkable day!”