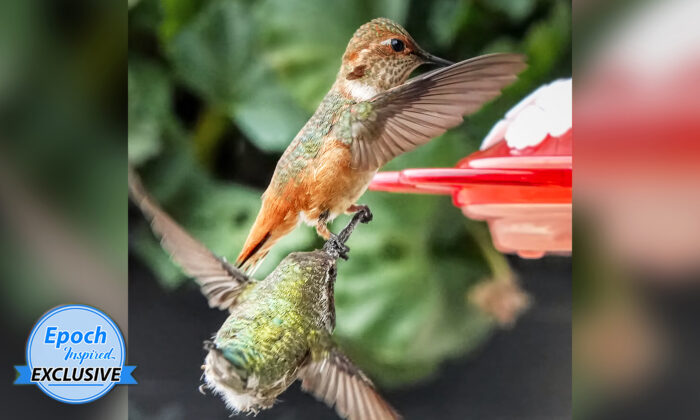 But there’s another side to this serene-seeming bird that defies expectation.

SoCal-based photographer Terry Williams knows that hummingbirds can be “very territorial”—and he recently captured some extraordinary shots of the birds dueling.

In recent years, Williams has been shooting these beautiful birds that come to visit the hummingbird feeders in his backyard; each day some 20 different hummingbirds flock there to wet their beaks.

But sometimes, the retired immunologist said, he would spot a commotion in the crowd.

“Some of the hummingbirds, especially the males, become what a lot of people refer to as a ‘bully,’ very aggressive,” Williams told The Epoch Times. “This is just part of their nature.

“Occasionally, a bully will come in and try to take over a feeder or a group of feeders.

“And this bully is so aggressive that he will attack any other hummingbirds that are even near, or approaches.”

On one particular day late August, Williams witnessed one such fight involving a “real bully” who began to “just tear up everybody that even looks at that feeder.”

Bully or not, Williams saw the perfect photo opportunity.

He got out his tripod and Sony RX10 Mk IV to photograph the dueling birds—whose wings flap at a breathtaking 60 beats per second, a spectacle he captures using a 1/2500-second shutter speed.

Williams began clicking away, but didn’t realize what an amazing shot he’d taken until later.

“I took a lot of shots of this particular hummingbird attacking the other birds, and I went and did post-production, and when I was looking to edit the photos, I ran across this shot, and I just about fell over,” he said.

Amidst the fray, he managed to snap the “big bully,” a red Allen’s hummingbird, grasping the beak of a green Anna’s hummingbird in its claws.

Williams posted the phenomenal pic on several wildlife, bird, and hummingbird Facebook groups; and it garnered a “wildly overwhelming” response, with thousands of reactions from animal lovers.

In past shoots, Williams has also witnessed tussles where hummingbirds would actually joust each other with their beaks.

As for Williams’s recent “real bully” encounter, he recorded the melee on video, but said it would be almost impossible to see the rare exchange in the footage.

“You wouldn’t really be able to see it with your eye because it’s over in less than a fraction of a second,” he said.

“This is a one-in-a-million shot.”