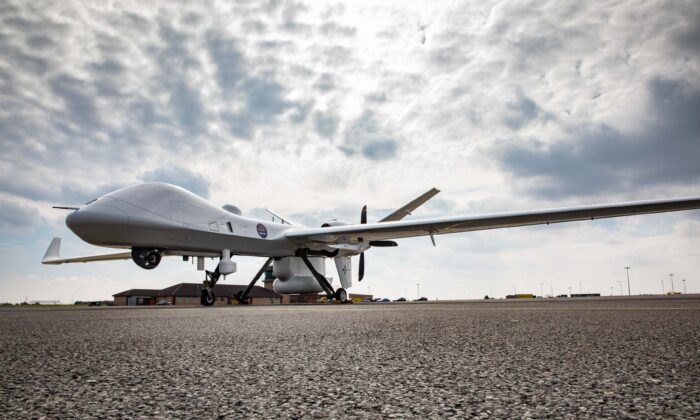 An undated file photo of the Protector drones from General Atomics-Aeronautical Systems Inc (GA-ASI). (Courtesy of the UK Ministry of Defence)
UK

The UK has ordered 16 Protector aircraft from its U.S. manufacturer General Atomics-Aeronautical Systems Inc (GA-ASI). They will enter into service in 2024 and will be based at the RAF’s Waddington base in Lincolnshire, England.

A pre-production example of Protector took to the sky on Thursday at RAF Waddington, which will become an international centre for allies to train on the new drone.

Talking to media at the event, Wallace said he believes the terrorist threat has become more global now, as the “reservoir of people who might cross that line into violence is probably greater than it was” before the 9/11 attacks.

Protector is a huge leap forward in performance & technology. It can fly for 40hrs anywhere in the world protecting the UK & our allies. @RoyalAirForce receives our 1st of 16 aircraft in 2023. Trials this month at @RAFWaddington & @RAFLossiemouth are a taste of things to come. pic.twitter.com/8YJTLLqomx

He said that NATO’s withdrawal from Afghanistan could inspire terrorist groups to mount attacks and that Britain has the right to defend itself from such terror plots, The Times of London reported.

He said he is ready to do whatever he has to do “to protect British citizens’ lives and our interests and our allies when we are called upon to do so, wherever that may be.”

He said the Protector drone is not “a silver bullet to deal with terrorism,” but is an “incredibly important tool in our armoury,” The Telegraph reported.

“It can fly further for longer, for many more places around the world, with a much wider range of potential missions from flood monitoring to maritime patrol, to strikes on violent extremists who would do us harm,” he said.

The UK is vigilant to the increased terror threats as the Taliban takeover of Afghanistan has “heartened and emboldened” Islamic extremists, Ken McCallum, director-general of the MI5 intelligence agency said on Friday.