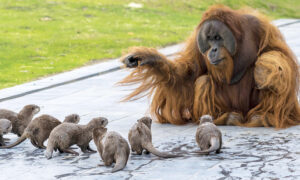 Orangutans Befriend Group of Otters at Zoo as Part of Enrichment Program, and the Photos Are Adorable
0 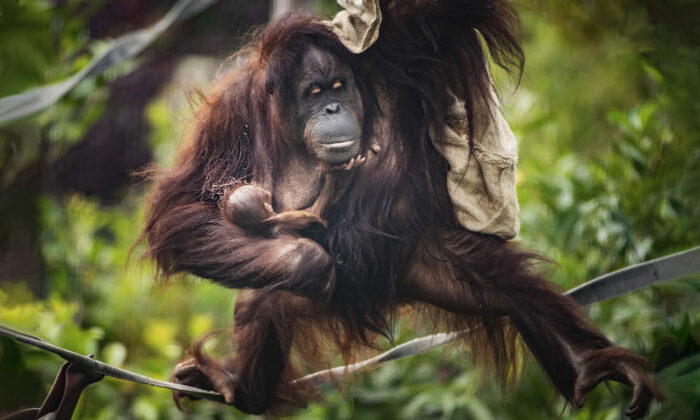 Chester Zoo in the UK received quite the surprise recently. One of their Bornean orangutans had a baby on June 18 despite a number of pregnancy test results coming back negative.

Sky reported primate keeper Chris Yarwood, who works at the zoo, as saying: “The pregnancy tests we had carried out on Leia in the months prior to the birth had actually returned negative results. It was therefore a wonderful surprise to arrive one morning and see her protectively cradling a beautiful new arrival.”

Leia had the baby with fellow Bornean orangutan Willie. She has however kept her offspring somewhat hidden since birth, and keepers are yet to get close enough to determine if the baby is male or female. They described the baby as “bright, alert and suckling well.”

Only around 55,000 orangutans remain on the Indonesian island of Borneo—which is the only place that they can be found in the wild. They are classed as critically endangered according to International Union for the Conservation of Nature.

Deforestation for farming and conversion of the forest for palm oil production has removed much of their natural habitat. Numbers have also suffered from illegal hunting. Chester Zoo adds on its website: “With this huge decline in the population, our family of orangutans are part of a vital international breeding programme which is working to conserve the species.”

Leia has so far enjoyed spending a lot of time alone with her new arrival. The baby is in fact her second, and she is recognized as being a great mom and doing a fab job once again.

Chester Zoo is one of only a few in Europe that homes both Bornean and Sumatran orangutans, of which only around 14,000 remain. In recent times though, the zoo has welcomed births from both subspecies.

Chris Yarwood reflected upon the new arrival, saying, “It just goes to show that, despite all of the uncertainty in the world right now, life is carrying on as normal for the orangutans, which is really uplifting to see.”