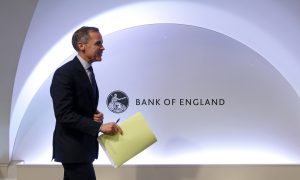 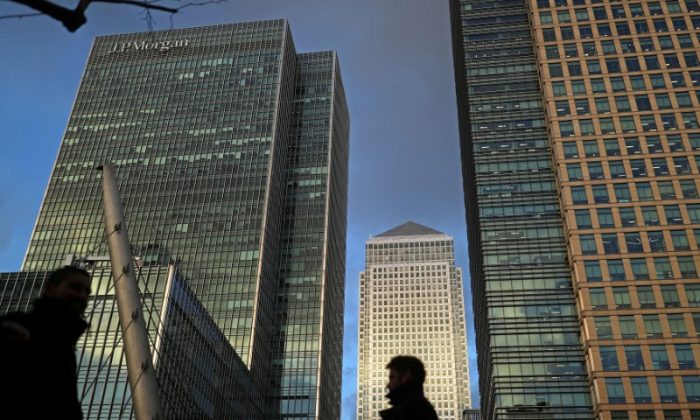 LONDON—Britain’s economy grew at its weakest pace in half a year in the three months to November as factories suffered from tough global trade conditions and the approach of Brexit, official data showed on Jan. 11.

Gross domestic product was 0.3 percent higher than in the previous three-month period, down from growth of 0.4 percent in the three months to October and matching the consensus of a Reuters poll of economists.

Manufacturers suffered their longest period of monthly declines in output since the financial crisis, hurt by weaker overseas demand, the Office for National Statistics said.

Worries about the global economy have been mounting due to concerns about a trade war between the United States and China. Figures from Germany and France earlier this week also showed falling industrial output.

“There may well be a common theme which is hurting the factory sector throughout Europe, for example changes in the auto industry,” Investec chief economist Philip Shaw said, adding that Brexit worries were also weighing on investment.

Carmakers across Europe have suffered from a fall in demand for diesel vehicles due to pollution concerns.

Carmakers are facing a perfect storm in Europe https://t.co/Qj8xPxZPlB pic.twitter.com/o19acGKWrg

The figures fit with business and consumer surveys that suggest the economy is slowing sharply after robust growth of 0.6 percent in the third quarter of the year, reflecting growing uncertainty ahead of Brexit, as well as global jitters.

Britain is due to leave the EU on March 29 and whether businesses will still be able to trade without disruption to cross-border supply chains remains unclear.

Prime Minister Theresa May risks losing a parliamentary vote on Tuesday on the deal she has agreed with the EU. Defeat would leave open the prospect of Britain leaving the EU without any transitional arrangements to smooth the economic shock.

Compared with a year earlier, Britain’s economy was 1.4 percent larger. In November alone, it expanded 0.2 percent, compared with forecasts for a rise of 0.1 percent.

The Bank of England says the economy is likely to have grown around 0.2 percent over the fourth quarter of 2018.

Closely watched purchasing managers’ surveys have pointed to fourth-quarter growth of around 0.1 percent in Britain, according to data firm IHS Markit which compiles the surveys.

Britain’s economy slowed after the June 2016 Brexit vote, its growth rate slipping from top spot among the Group of Seven group of rich nations to mid-table or lower.

Britain’s services sector grew by 0.3 percent over the three months to November, while industrial output dropped by 0.8 percent, the biggest decline since May 2017.

By Andy Bruce and David Milliken