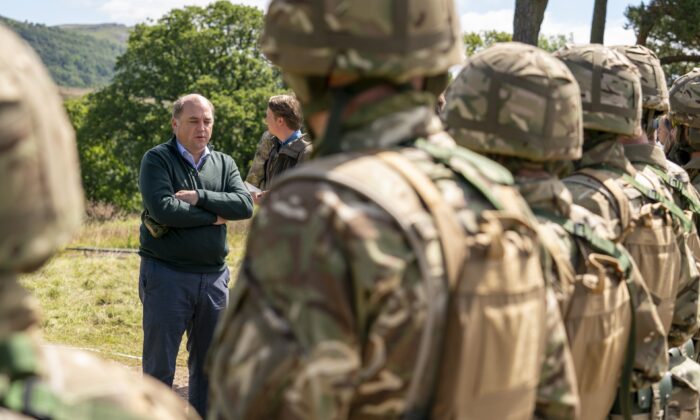 Defence Secretary Ben Wallace speaking to new recruits to the Ukranian army who are being trained by the UK armed forces personnel at a military base near Manchester on July 7, 2022. (Louis Wood/The Sun via PA media)
Russia-Ukraine War

The UK’s Defence Secretary Ben Wallace said the UK will continue its support for Ukraine, no matter who the next prime minister is.

It comes as a Ukrainian lawmaker said people are “very much concerned” about whether or not the UK’s next leader will offer the same level of vocal support following the resignation of Prime Minister Boris Johnson.

In an interview broadcast on Saturday on GBNews, Wallace said the UK is “full square” behind Ukraine.

“The assistance to Ukraine we give is not just one person,” he said, “not me, not the prime minister, it’s the whole effort.”

Wallace was at an army base in the north of England, visiting Ukrainian soldiers as they started their several weeks-long training.

“We’ve got the British Army up here today, up in the north of England training Ukrainians,” Wallace said, adding that there’re also troops in Estonia and Poland as part of NATO deployment.

The defence secretary said “actions matter in all of this” and stressed that he doesn’t expect support for Ukraine will disappear after Johnson steps down.

“While the prime minister will be incredibly sad to leave this post—he has led from the front on Ukraine—but the whole of the political system is supportive of what we’re doing in Ukraine. I don’t expect that to finish at all,” he said.

Around 1,050 UK service personnel are being deployed to run the training programme, which will take place at Defence Ministry sites across the North West, South West, and South East of the UK, training up to 10,000 Ukrainians over the coming months.

The training will give volunteer recruits with little to no military experience the skills to be effective in frontline combat. Based on the UK’s basic soldier training, the course covers weapons handling, battlefield first aid, fieldcraft, patrol tactics, and the Law of Armed Conflict.

The UK government has also procured AK variant assault rifles for the training programme, meaning Ukrainian soldiers can train on the weapons they will be using on the front line.

This was supported by the Welsh Guards, who tested more than 2,400 such rifles in 17 days to ensure they were ready for the Ukrainians to commence their training.

The UK has also gifted clothing and equipment to support Ukrainian soldiers in their training and deployment back to Ukraine.

Later on Saturday, Wallace announced that he decided not to run in the Conservative Party leadership contest, saying he’s focusing on the job at hand.

“After careful consideration and discussing with colleagues and family, I have taken the decision not to enter the contest for leadership of the Conservative Party. I am very grateful to all my parliamentary colleagues and wider members who have pledged support,” the defence secretary wrote on Twitter.

“It has not been an easy choice to make, but my focus is on my current job and keeping this great country safe. I wish the very best of luck to all candidates and hope we swiftly return to focusing on the issues that we are all elected to address,” he added.

Four MPs have launched their bids by Saturday, with more expected to join.

The timetable of the race’s parliamentary process will be announced on Monday, but it’s expected that the two final candidates will be selected by July 20, with a new prime minister chosen at the beginning of October.