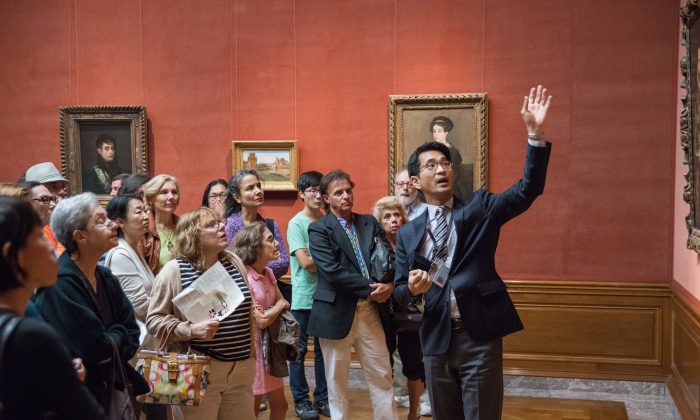 NEW YORK—Presumably, Men in Armor, the Frick Collection’s two-portrait fall exhibit, is a comparison of Vincenzo Anastagi and Jacopo Boncompagni. Both were fighting men of some prominence in 16th century Italy.

Heavily muscled and full of bluster, Anastagi was a middle-ranking nobleman and a Knight of Malta. As infantry leader, he contributed to the defeat of Ottoman troops during the 1565 siege of Malta.

Gentlemanly and refined, Boncompagni was the son of the man who would be elected Pope Gregory XII. Boncompagni was a patron of the arts, a lover of chess, and as a perk of having a papal papa, the leader of the Vatican troops.

In 1575, Boncompagni appointed Anastagi to the office of sergeant major of the Castel Sant’Angelo. That explains the relationship between these two men who seem to share little at first glance (other than the fact that they both donned armor for their portraits).

Add to this small drama their painters. El Greco painted the likeness of the former, Scipione Pulzone the latter. Both portraits were executed within a few years of each other, around the time of Anastagi’s appointment.

El Greco, with his thinly painted, streaky, almost scrubby brushwork and minimalist sensibilities, is now a favorite among admirers of modern art movements such as expressionism and cubism. Though he’s well known now, El Greco spent a great part of his career struggling to gain recognition—mostly unsuccessfully. Attribute his bad luck to changes in popular preference.

Back then, his style puzzled contemporaries, and his own lack of success frustrated him, especially as he sized himself up against a superstar like Pulzone.

Pulzone was celebrated in his lifetime. His fine rendering of the smallest of details in laces and faces made him the most sought-after portrait painter in Rome, as portraits of Roman aristocrats and clerics can attest. Yet Pulzone is sadly forgotten today, save for within academic circles.

Curatorial assistant Jeongho Park spoke about the two portraits before a small gathering at the Frick on the evening of Aug. 15.

Park had been studying El Greco, and became fascinated with the portrait of Anastagi, the artist’s first full-length portrait. It was done before El Greco really became El Greco as we know him now, the painter of tortured, elongated bodies and scenes of religious rapture. At that time, El Greco was trying desperately to cut it as a portraitist in Rome.

Born Doménikos Theotokópoulos 1541 in Crete, El Greco spent his early career painting Byzantine icons and in 1567 relocated to Italy, where he aspired to enjoy the patronage of elite sitters.

It was around 1575 when El Greco painted Anastagi, a man who “was not really interested in commissioning artworks,” according to Park. Anastagi’s peeved expression might even suggest he was begrudging even as paint hit canvas. And this was during a time when it seemed anyone with a small fortune was getting their picture made.

Park believed El Greco painted Anastagi to bulk up his portfolio and show off his mastery in depicting materials of various textures. With a new boss in high places, Anastagi would make a convenient steppingstone to the pope, high society, and glorious commissions for the church. So El Greco probably thought.

The plan failed to earn him any notable commissions. In 1577, El Greco moved to Toledo, Spain, where he lived out the rest of his life producing religious paintings, though no less ambitiously than he had pursued portraiture.

Ambitions on and Behind Canvas

If El Greco was more enterprising than his sitter, in the Pulzone-Boncompagni pair, it was the sitter who more obviously wanted to project a glorious image.

Dressed in eye-popping elaborate parade armor (as opposed to Anastagi’s simple field armor), Boncompagni wanted to speak to viewers through heavy symbolism. This was typical of the language of Renaissance military portraiture.

Sword, breastplate, helmet, and elbow guards—all are plastered with archangels, prisoners of war, and other allusions to military might. Tempering this machismo is a wooden letter case in his left hand, an allusion to Boncompagni’s diplomatic mission to greet the future French King Henry III in Ferrara.

Finally, the blue velvet curtain in the upper right corner serves as a meta-allusion to the Greek story of dueling painters Zeuxis and Parrhasius, in which Parrhasius painted a curtain so realistically that his adversary tried to lift it. This painting-within-a-painting device would have impressed learned viewers, and was a favorite of realism-obsessed Pulzone.

What if the two painters swapped sitters? Would Pulzone have made the middle-ranking officer Anastagi look more refined? Would Pulzone have even bothered with such a client? Would El Greco and Boncompagni, with their shared need for recognition, have been an unstoppable propaganda machine? Something fun to consider.