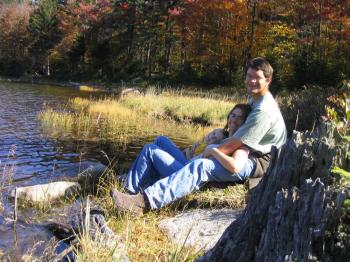 Twin Aspects of the Same Soul

BY Molly A. Daniels-Ramanujan TIMEDecember 24, 2009 PRINT
Jennifer and John Bokaer-Smith are organic farmers. Ecovillagers buy the fruits and vegetables grown in their West Haven farm. They are not Grant Wood types.

They met in a small class on “Introduction to Conservation Resource Studies” at UC Berkeley.

They scarcely noticed each other. Each was in the other’s blind spot.

A year and a half later, they met again, and Jennifer says, “We fell head over heels in love.” The two together make up one soul.

Jennifer had grown up wanting to make a contribution to the world around her. John was searching for the ethical center within himself. Jennifer says, “John has the highest moral compass of any individual I have ever met in my life.”

Earlier, John had joined a Catholic school, even though he was not born a Catholic. He says, “I wanted to be challenged.” He liked the ethics class the most, but the teacher snatched away his book because he had made dissenting remarks in the margins questioning her statements. He says, “I was judgmental about her views.”

Jennifer’s first choice was to become a doctor, but she so abhorred pre-med, that she decided instead to put her life’s effort into working on sustainability, conservation, and nature.

They found out that they were pursuing the same dream: one working outward, the other inward. Together they created West Haven Farm on 10 acres of land to grow community-supported organic food. The land had been a conventional dairy farm in the 1960s and ’70s.

Readers of this column have read many mentions of Jen’s mother, Joan Bokaer. EcoVillage in Ithaca came out of Joan’s waking dream as she was crossing a meadow while leading a group of people on a walk across America to stop nuclear weapons.

Joan’s life would be a fit subject for a film biography. For that matter, Jennifer’s maternal grandmother’s life is worth recording. Grandmother Grums went to Germany right after the war and worked with Jews who had survived the camps, helping them resettle in the United States. She urged her family to work for the common good.

Jennifer noticed how Grums had fun ignoring the Emily Post type of everyday manners. She would take her two granddaughters to the fanciest restaurant and urge them to dip their toast in their cups of hot chocolate.

Jen had a head cold when I interviewed her, so I heard “toast” as “toes” and cheered up, thinking, “Ah, a real character!”

But Jennifer corrected me, “Grums did not go that far! She encouraged minor infringements of social norms. For example, Grums liked to dress in scrubs even though she was not a doctor. She was beautiful and highborn."

Jennifer's paternal grandmother was the opposite. She came from Tunisia and Israel and spoke no English. During her visits her views were writ large over their household. Grandma Bavica insisted that the granddaughters should dress well as she did and be of good manners.

John repeated a family tale about Bavica’s mother. When her parents produced suitors for her hand in marriage and asked Bavica’s mother to make coffee for the groom-to-be, she thought it was her best opportunity to discourage the match.