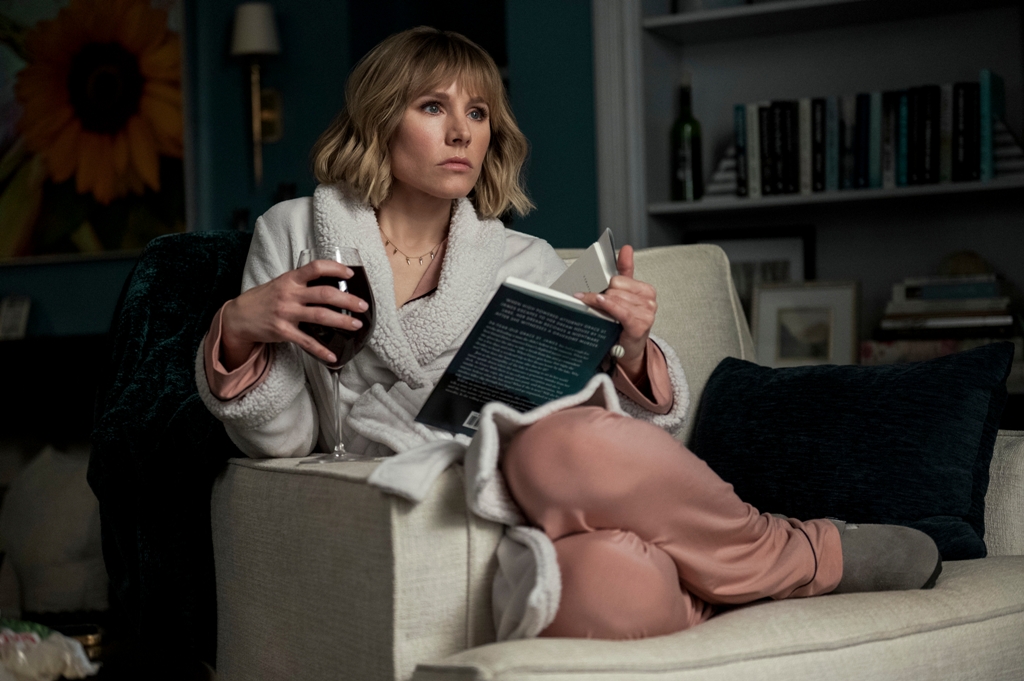 TV Review: ‘The Woman in the House Across the Street From the Girl in the Window’: The Ideal Sweet Spot Between Satire and Thriller

It should be made clear from the start that the copiously titled “The Woman in the House Across the Street from the Girl in the Window” [WHASGW] certainly isn’t for all tastes. Instead of being a straight-up mystery thriller or full-on satire of the same, the new eight-part, 196-minute limited series from Netflix is equal parts of both.

Presented through the eyes of unreliable narrator and lead character Anna (Kristen Bell, in a career defining role), “WHASGW” brazenly pilfers from “The Girl on the Train,” “Gone Girl,” “House at the End of the Street,” “Identity,” and not one but two Alfred Hitchcock classics (“Rear Window” and “Vertigo”). In a bit of cheeky, self-aware, uber-meta, it also acknowledges the similar 2021 Netflix feature clunker “The Woman in the Window” starring Amy Adams.

The once-promising artist Anna is going through an extended rough patch. She’s still reeling from the death of her toddler daughter three years earlier—an event which led to a divorce from her psychologist husband Douglas (Michael Ealy). She imbibes way too much red wine and prescription meds and won’t leave the house if it’s raining (an actual medical condition called “ombrophobia”).

Things start looking up with her new neighbor Neil (Tom Riley, a cross between Pierce Brosnan and Hugh Jackman), a widower and the father of Emma (Samsara Yett). A housewarming gift of a casserole leads to what appears to be a fresh start for the three of them until the arrival of Neil’s girlfriend Lisa (Shelley Hennig), a flight attendant who perceives Anna as a threat and slips into territorial, mama bear mode.

Needless to say, this is a huge letdown for Anna who regresses back into donning her well-worn bathrobe. She uncorks another couple bottles, plops down in an easy chair and observes Neil and Lisa through the windows—during (of course) a rain storm. Certain she sees Lisa being murdered, Anna calls 9-1-1 but is dismayed when investigating officers tell her there is no dead body, and Lisa is currently on a plane headed for Seattle.

From this point forward, Neil and Emma understandably keep their distance from Anna, as do her snooty, holier-than-thou established neighbors who are already convinced she’s a train wreck. Undeterred, Anna begins her own investigation of Neil’s past which includes the mysterious death of his wife and a local teacher. Instead of unearthing the truth, Anna digs an even deeper hole for herself to such a degree that even her sole friend Sloane (Mary Holland) becomes worried for her sanity.

By her own admission, Anna has experienced multiple hallucinations in the past and the continued substance abuse—coupled with her own mounting paranoia and persecution complex—forces the audience to begin doubting her true intentions.

Black Comedy, Satire, and Parody Are Not Interchangeable

Best known for his feature debut (the cult favorite “Heathers”), Lehmann eventually became a fixture in episodic cable TV and his work with similarly darkly comic series’ such as “Big Love,” “Nurse Jackie,” “Dexter,” “True Blood,” and “Californication” made him a perfect choice for “WHASGW.” Lehmann and the writers understand that black comedy and satire are similar but not the same and neither equates to the often broad exaggeration of parody. By never drifting far from traditional drama and mystery tropes, the humor comes with greater sting and unease. You’ll catch yourself laughing and recoiling often at the same time.

The series isn’t without a few missteps. When Sloane says “I know I said I wouldn’t show up unannounced again but here I am” for the umpteenth time, you wish she’d just go away. A steamy and extended (but well blocked)  romantic interlude serves no purpose other than titillating diversion and many viewers will find it hard to understand out why the resident handyman can’t quite figure out how to repair Anna’s broken mailbox.

Without spoiling anything whatsoever, the identity of the killer is ultimately revealed, although some might consider it something of a stretch, but with the use of flashback, it does make complete sense.

The casting of a big name, multi-award-winning icon in an uncredited cameo during the final 10 minutes – in tandem with an open-ended finale – indicates there is a possibility for a subsequent series. Unless it would be just Anna with a completely new set of supporting characters, this same premise likely wouldn’t work nearly as well. Or, if Netflix chose to make more genre mash-ups, they could easily go the route of FX’s “American Horror Story” where the same performers play different characters in similar stories.