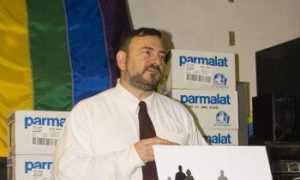 "I really enjoyed it. I thought it was magical, really beautiful," said Taiwanese-born Ching. "The performances were just really elegant and really true, true to the heart."

Ching loved the costumes. "The costumes are really stunning. I was thinking 'where can I get one?'” she said.

The painstakingly detailed work on the hand-made costumes gives a beautiful vision of China’s rich history and the folk and ethnic dances.

Ching found the costumes captured her imagination and was fascinated that there was more than meets the eye. "Through looking at the costumes you are able to recognise which folk story or which community, whether it’s Manchuria or whether it’s Mongolia, so it’s really beautiful, really special," she commented.

The Shen Yun Touring Company Orchestra is unique in that it brings traditional Chinese and Western instruments together to create a harmonious sound. Ching enjoyed the music and discovered many new Chinese instruments. "I didn’t realise there were so many!" she said.

Having lived in the UK since she was a young child, Ching is keen to connect with her Chinese heritage and enjoys learning about Chinese culture. She found that Shen Yun expanded her knowledge and awareness.

Central to the show are stories that embody traditional Chinese ideas. One dance, The Opening of Heaven's Gates, shows the principle of "good deeds are rewarded with good and bad deeds incur retribution" through the modern tale of the spiritual discipline Falun Dafa in China. For peacefully upholding his belief, a young man is persecuted by the police and Heaven's wrath ensues.

The messages and performances "really touched me," Ching said.

[i]New York-based Shen Yun Performing Arts Touring Company will next perform in The Hague, Netherlands, at the Lucent Danstheater, on April 12 and 14. For more information, visit ShenYunPerformingArts.org