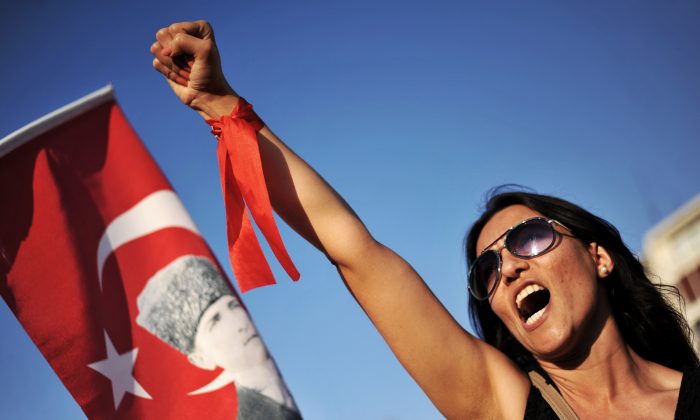 A protester raises her fist and shouts a slogan during a demonstration on Gundogdu Square in Izmir on June 9, 2013. (Ozan Kose/AFP/Getty Images)
Opinion

Turkey's prime minister supports right to dissent in other countries, but not at home

The decadelong rule of the Justice and Development Party—Adalat ve Kalk’nma Partisi, or AK Party—led by Erdogan may be past its zenith. The demonstrations, resulting in injuries to 5,000 and arrests of more than 900, have revealed a disturbing flaw in Erdogan’s leadership style. Puffed up by his successes at home and in the region, he’s failed to grasp the essence of democratic behavior and the potency of social media in a country of 74 million with 66 million mobile phone subscribers and 32 million Internet connections.

He has denounced the protesters as vandals, drunks, and extremists. Portraying himself as the epitome of the “national will,” he decried fringe elements “hijacking” the protest and misleading “my citizens” and warned, “We will not allow any attacks on the national will, regardless of how it is presented and who it is supported by.”

A minor protest by environmentalists against converting central Istanbul’s only public park into a multipurpose complex of shopping mall and a cultural center mushroomed into anti-government demonstrations in 70 urban centers. The start of the redevelopment project coincided with government’s sudden decision to ban sale of alcohol between 10 p.m. and 6 a.m. Erdogan, a nonsmoking teetotaler, was the prime mover behind this restriction.

In November 2002 the Islamist-rooted AK Party, winning almost two-thirds of the parliamentary seats, inherited an economy with zero growth. The socially conservative party adopted neoliberal policies, opening the economy to global financial markets and privatizing state assets. Between 2003 and 2007, real inflation-free GDP expansion ranged between 4.5 and 8.2 percent a year.

But the Party’s success in the 2007 general election failed to protect Turkey from the ill effects of the 2008–2009 recession. By the time Turks went to the polls in June 2011, however, the economy was humming at 8.5 percent growth. The upturn was the result of the Erdogan government easing regulations on companies and startups, and removing visa restrictions for Russians to boost tourism. On a record 50 percent popular vote, the AK Party won 315 of the 550 parliamentary seats. That year Turkey became the sixth most popular tourist destination on the globe, with 31 million foreign tourists supporting an industry worth $30 billion.

Overall, the booming economy was the backdrop against which Erdogan notched up several diplomatic successes. In May 2010 he backed the Gaza Freedom Flotilla, organized mainly by a Turkish NGO to breach the Israeli-Egyptian blockade of the Gaza Strip. It was attacked by the Israeli military and led to the death of nine Turks. Enraged, Erdogan downgraded Turkey’s diplomatic ties with Israel. This raised his profile among Palestinians and other Arabs at the expense of Egypt’s President Hosni Mubarak. He went on to support the Palestinian Authority’s attempt to secure the status of a sovereign state for Palestine by the United Nations.

At the start of anti-Mubarak demonstrations in January 2011, he was hesitant to take a strong stand against the Egyptian leader, but soon changed tack and made an emotional speech calling for Mubarak’s resignation. After appeals to Col. Moammar Gadhafi to step down failed, he signed on to NATO taking over control of the no-fly zone in Libya in March 2011.

“Freedom, democracy and human rights must be a united slogan for the future of our people,” Erdogan said in his address to foreign ministers of the Arab League in September 2011.

The AKP leader’s advocacy of democracy eased the way for the Muslim Brotherhood in Egypt and the Islamic Hizb al Nahda, or Renaissance Part, in Tunisia to participate legally in politics. Electoral success by these parties in Cairo and Tunis, respectively, led to cordial relations with Ankara, further bolstering Turkey’s influence.

At home, through a series of well-orchestrated moves, Erdogan brought the military under civilian control—a game-changing achievement in the republic’s seven-decade history. Using legislative powers, the AK Party amended the constitution to make the highest ranking judges and state prosecutors representative of society at large rather than of the ultra-secular elite groups.

No less significant was the March peace deal with the Kurdistan Workers Party, Partiya Karkaren-e Kurdistan, or PKK, whose armed struggle first for an independent state of Kurdistan, and then an autonomous region within Turkey, dated back to 1984.

These outstanding accomplishments, the winning of three general elections, and virtual collapse of the secular Republican People’s Party, seemed to have gone to Erdogan’s head and made him overconfident to the point of acting like an autocrat.

Erdogan failed to register the enormous growth in social media and its power to mobilize individuals around a specific goal, and undermine censorship—imposed or adopted voluntarily—by the established media. “There is now a menace which is called Twitter,” he said on June 3, “The best examples of lies can be found there. To me, social media is the worst menace to society.”

He seemed unaware that Turkey had one of the fastest-growing populations of social media users on the planet, with a threefold increase in usage in recent years. A contrasting opinion was offered by Taha Akyol, newspaper columnist and TV personality, “Social media is the voice of pluralism.”

“If we accept modernity and democracy, we have to accept social media,” he said.

Erdogan was equally defiant in the face of the 22 percent plunge in the Borse Istanbul Stock Exchange National 100 Index since the beginning of the protests. “The interest rate lobby thinks they can threaten us by entering into speculations in the stock exchange,” he said. “They should know we will not let them abuse the nation’s wealth.”

To boost economic growth from its dreary 2.5 percent last year, Erdogan, a former mayor of Istanbul, came up with an $80 billion infrastructure plan. Turning the Gezi Park in central Istanbul into a multipurpose complex is part of that scheme. So, too, are projects to build the third bridge over the Bosporus and an artificial canal to link the Black and Marmara seas. There were no public hearings on these proposals or debate in the media.

Meanwhile, high domestic interest rates, reflecting inflation of 7 percent, compared to those prevalent in the West attracted short-term foreign capital. That raised the value of the Turkish lira, triggering demand for foreign goods.

But that made Turkish prosperity dependent on speculative investors from abroad. This “hot money” has contributed $120 billion since the beginning of the year, with another $40 billion coming from Turkish banks’ foreign loans—sums needed to cover the $200 billion a year Turkey needs to finance its current account deficit and maturing foreign debt of $413 billion.

“The influx of foreign capital and growth gave the perception of stability,” noted Ergin Yildizoglu, columnist for the Cumhuriyet daily. “Now that stability is under question, which puts the influx under question, and throws the ‘economic miracle’ in doubt.”

The open door to the world that Erdogan used to boost Turkey’s GDP now poses a threat to his changed leadership style.

Dilip Hiro is the author of “Inside Central Asia: A Political and Cultural History of Uzbekistan, Turkmenistan, Kazakhstan, Kyrgyzstan, Tajikistan, Turkey and Iran.” Copyright © 2013 YaleGlobal and the MacMillan Center. This article was originally published on YaleGlobal Online.