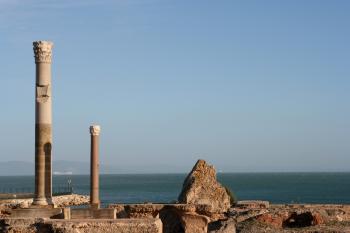 The ruins of the Thermal Baths of Antoninus along the shores of the Gulf of Tunis. (Olivier Chartrand/The Epoch Times)
Travel

Besides its beautiful landscapes, Tunisia delights visitors with its rich history and easygoing locals.

Situated at the northernmost tip of Africa, this exotic destination is a wonderful introduction to the Arab world. Facing the Mediterranean, the country is a blend of sun, beach, and culture—ideal for those who wish to try something new for their holiday this year.

Culture lovers will revel in the picturesque city of Carthage in the north of the country, home to the presidential palace and residences of several ambassadors. As a World Heritage site rated by UNESCO, Carthage is the cradle of the Punic (Carthaginian) civilization that was founded by the Phoenicians who were military and economic elites before they were overthrown by the Romans.

Some of the more worthy sites include the baths of Antoninus and Mount Byrsa, where the historic ruins of an ancient Punic city lie in the shadows of the St. Louis Cathedral.

Atop Mount Byrsa sit the historic relics of three major civilizations: Carthaginian, Roman, and Western. Upon arrival one is struck by the brilliant and immaculate whiteness of the Saint Louis Cathedral. France, a former ancient colonial power, erected the Catholic cathedral at the end of the 19th century in honour of Francois IX, the King of France, who died in the Crusades.

Punic and Roman ruins can also be found behind the cathedral, other artifacts from the Crusades near a statue of Louis IX, and a museum where you can discover the city at its peak. This site is a wealth of archaeological finds and is unprecedented as an exciting glimpse through the centuries from antiquity to today.

A site that really captivates visitors with its panoramic view is the Baths of Antoninus. The ruins of this only remaining Roman bath in Carthage is a rare tourist spot stretching over 200 metres along the shores of the Gulf of Tunis. The width and breadth of this site can help determine the impressive dimensions of this building and the importance of the city in the Roman Empire. You enter the site through a path into the heart of a beautiful park at the end of which appears—as if in a dream—two of the last remaining columns of what was the largest building that housed the Public Roman Bathhouse in Africa.

While visiting any country, it is just as important to appreciate the local people as well as the tourist spots. In Tunisia, contact with the locals is facilitated by the fact that, at least in the most frequented parts, people express themselves well in both French and English. The Tunisians are courteous and polite. Unlike many other tourist attractions in the world, in Tunisia you do not feel like just another pawn in the tourist industry.

Indeed, one feels safe in Tunisia, a country that seems very stable politically and socially. Free education is provided up to University level (in an education system similar to that of France), and children are obliged to go to school up to the age of 16, which probably contributes to the country’s stability. Of course, one cannot be too naive about the democratic process in Tunisia, and the press seems to have a tough time according to Reporters without Borders, although all the major French dailies are sold here.

Being an Arab country, it comes as a bit of a surprise to discover that women are very involved in Tunisian society and seem emancipated. There are female doctors, policewomen, and even taxi drivers, because women also have access to free education. A small percentage of women cover their hair but most leave it flowing freely. It is forbidden to cover one's face with a hijab or to wear a burka, according to tour guides. The Tunisian State is secular one, even if Islamic values are largely present in everyday life.

According to several Tunisians, wearing a veil over one's hair is actually a personal choice (and possibly a family one) according to the values and beliefs of the woman herself. When a Tunisian woman wears a veil, it is always with style.

One of the characteristics that make Tunisia charming is the elegance of the women. Even in the less affluent areas, women take great care of their appearance. With their piercing eyes and lovely Mona Lisa smiles, they reflect all the charm of a modern woman with all the beauty of Middle Eastern attributes.