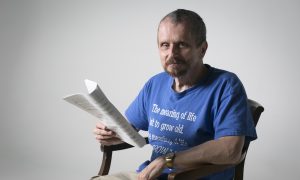 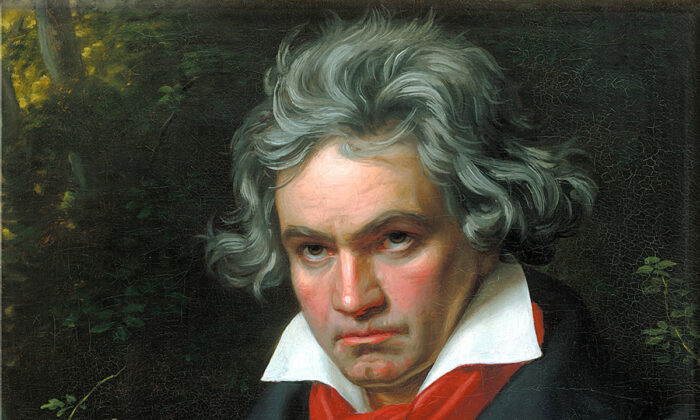 “I love the truth more than anything,” Beethoven wrote to Goethe 200 years ago. Of course, Goethe loved the truth as well, but in a rather glacial manner, at a distance. Beethoven’s love was passionate, urgent, unsettling; truth, to him, seems to have had something to do with God, with love itself, with justice and beauty. Certainly, these make up the elements of his music—sublime, sincere, and beautiful, beyond words.

Although his music is beautiful, Ludwig van Beethoven was not. His friends say that he was short, swarthy, solidly built, clumsy, and awkward, with a rather homely, pock-marked face. They also kindly mention his beautiful mane of hair and the brilliant whiteness of his teeth.

Beethoven was the son of a drunkard, knew abuse and privation from his earliest years, but was nurtured by people of discernment and influence who, early on, recognized his great gifts. Although he had a volatile temperament, there is evidence throughout his life of a generous heart.

At the age of 29, on the threshold of success, he wrote his brother: “If conditions improve, my art will be used only in the service of the poor.” He never married, although he was almost always in love, and friendships were difficult for him, invariably broken off from time to time and later put right.

The great cross he had to bear was assigned early, in his 26th year, as he began to lose his hearing and rapidly became stone deaf. His famous “Heiligenstadt Testament,” written in 1802, tells of despair and thoughts of suicide, but it also tells of a great miracle, a great revelation, the discovery of his unshakable strength, and a certainty that “it is impossible to leave the world until I have brought forth all that I feel is within me.”

What was within him, his sublime music, was not written for classrooms, or scholars, or critics. It was written for the human heart and precludes either analysis or criticism. When considering some of his masterpieces in sequence, however, one finds an overview of his growth, not only as a man of genius but simply as a man. It reveals the expansion of a great soul, its steady course through youthful hopes, struggles, and victories to the final, wordless conversations with the Being to whom he prayed his entire life.

The song that begins “How glorious is nature, illumined before me” was composed when Beethoven was 19. It is the song of a young spirit, fearless and, with good reason, full of the highest hopes. One senses the same atmosphere in the chamber music of that early time, a reflection of the world in which he moved—the last decades of the 18th century, the age of enlightenment of symmetry, logic, and clarity.

The following years were the years of Romanticism, where music became less abstract and more personal. Forms were less rigid. The dramatic climate rose, and emotions, especially the emotions of the composer himself, took a prominent place in the music he produced. The “Choral Fantasy for Piano, Orchestra and Chorus” comes to mind. It is an exuberant hymn to nature and to the possibility of mankind’s achieving peace and happiness in this life. It is remarkable that such a work was written during the onset of his deafness.

Beethoven’s only opera, “Fidelio” was also conceived in this period, establishing a scenario that becomes familiar in many subsequent works, especially in the slow movements of his string quartets and piano sonatas: strife, an appeal to God for help, and an inevitable resolution with its attendant joy. The greatest examples of this, incomparable in their power, are to be found in the last act of “Fidelio,” and the “Ode to Joy” that closes the Ninth Symphony.

The music of Beethoven is the music of religion, and the “Missa Solemnis” is his crowning achievement, written “to awaken a lasting religious feeling in the performer and the listener.”

Perhaps the greatest of all portraits of Christ is found in the “Benedictus.” Voices sing “Blessed is He that comes in the name of the Lord,” but no word describes him, this blessed one to whom they sing. Instead a violin solo is heard, a sublime melody that floats over an entire orchestra and chorus. Nothing has been written or said, painted or sung, that gives us so clear or so powerful an image as this.

Almost all the music mentioned above involves texts, but in Beethoven’s final years, thoughts and feelings lay in a region where no word has ever entered. Music, however, moves easily beyond the boundary of language, telling of deeper struggles and triumphs.

There is a beautiful story that proves this: The grief of a mother from the death of her child is a great grief, and when a close friend of Beethoven suffered the loss of her little son, a boy of 6, the composer could not bring himself to approach her in her sorrow. After many days of not knowing what to do, what to say, he finally invited her to visit him at his home. When she came, he sat down at the piano and said, “We will now talk to each other in tones.” No words were spoken after that. He played to her for an hour, improvising, as she sat mutely, listening.

The story ends years later when she said to the young Felix Mendelssohn: “He told me that day everything I had needed to know, and at last I found the beginnings of consolation.”

We might say that the last piano sonata, Op. 111, tells us “everything.” It is the journey from despair to acceptance, and from acceptance to moments of joy, and moments of quiet wonder.

The “Adagio” from the last String Quartet Op. 135 gives us a glimpse of something still greater: the serene world that Beethoven reached at the end of his life journey. It is the sound of music sheathed in infinite silence, a serene, wordless dialogue between the composer and his Creator. It is the music of the glittering galaxies, beautiful, mysterious, wheeling through infinite space to some great, unknowable destination. Perhaps it is an assurance that there is a resolution to suffering, that we will indeed understand by and by.

Just before death, Beethoven said, “In heaven I shall hear!” My impression is that Beethoven always heard. “I got this music straight from God!” he screamed at a complaining musician.

We poor, vulnerable, mortals are the ones who seem to be deaf, straining to hear God’s word.