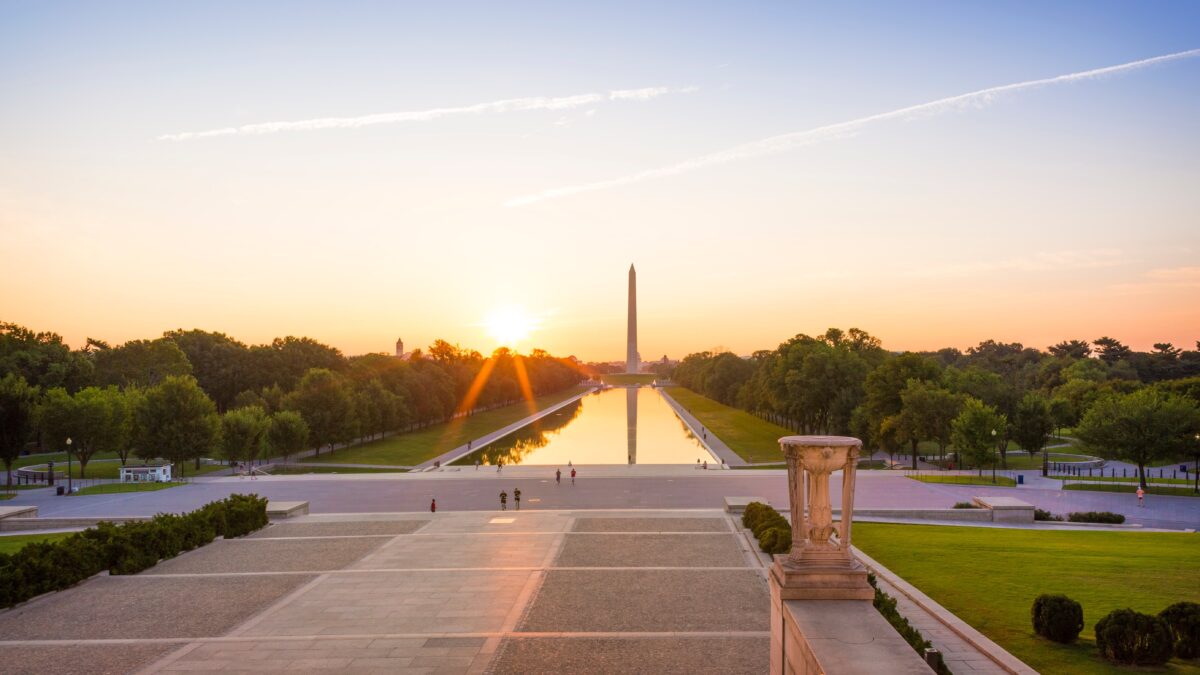 True American Spirit: The Unlikely Mélange of Inspiration That Brought Washington D.C. into Being

When the United States of America was young, the established cities of New York and then Philadelphia served as seats for the country’s government. While Alexander Hamilton and many northerners were content with this, Thomas Jefferson and a lot of southerners were not—so a seat for the federal government was established in a more central location. James Madison, in The Federalist No. 43, explained why the country needed a separate “federal district” which would be under the authority of only Congress and not part of the territory of any state.

This was not merely a theoretical concern. In June 1783, unpaid continental soldiers descended en masse on the Congress as it met in Philadelphia. Pennsylvania refused all requests for aid, and the legislators fled to New Jersey. Only the intervention of George Washington prevented the situation from escalating out of hand. Anti-Federalists were equally concerned, fearing an established federal city might become “a sink of corruption and a potential nursery for tyrants,” recounts historian Lee Casey.

Article 1, Section 8 of the U.S. Constitution provided for the federal government “to exercise exclusive Legislation in all Cases whatsoever, over such District (not exceeding ten Miles square) as may, by Cession of particular States, and the acceptance of Congress, become the Seat of the Government of the United States.” Congress specified only that the capital be located on the Potomac. In 1790, George Washington picked the exact location. In keeping with the original description, a 10-mile square district was laid down over the Potomac River to be carved out of Virginia and Maryland.

Thomas Jefferson envisioned a fairly simple layout for the seat of government, with a “limited public walk, a President’s House, and a Congress House.” These would be constructed in close proximity to one another. The surrounding area, as laid out in the 10-mile square, would remain perpetually as open countryside. Hence the capital, as envisioned by Jefferson, would be perpetually surrounded by fields, forests, and farmland.

Perhaps George Washington would have been content with that as well, but he received a letter, dated September 11, 1789, from a man who had served as one of his engineers during the war for independence. Pierre Charles L’Enfant was a French-trained architect and artist, and he wrote to Washington this request:

“The late determination of Congress to lay the foundation of a city which is to become the Capital of this vast Empire, offer so great an occasion of acquiring reputation, to whoever may be appointed to conduct the execution of the business, that your Excellency will not be surprised that my ambition and the desire I have of becoming a useful Citizen should lead me to wish a share in the Undertaking. No Nation perhaps had Ever before the opportunity offered them of deliberately deciding on the spot where their Capital city Should be fixed, or of Combining Every necessary consideration in the choice of Situation—and altho’ the means now within the power of the Country are not such as to pursue the design to any great extant it will be obvious that the plan Should be drawn on such a Scale as to leave room for that aggrandizement & embellishment which the increase of the wealth of the Nation will permit it to pursue at any period however remote—viewing the Matter in this light I am fully sensible of the extant of the undertaking and under the hope of a continuation of the indulgence you have hitherto honored me with I now presume to solicit the favor of being Employed in this Business.”

In 1791, L’Enfant first visited the site with Washington and was hired by the District of Columbia Commission to draw up an initial plan for the city. Given two weeks to come up with an initial concept, L’Enfant worked with surveyor Andrew Ellicott and his assistant Benjamin Banneker to develop a plan significantly grander than Jefferson’s. Incorporating the site’s high places as locations for great public buildings, and linking them with broad diagonal avenues, L’Enfant created a capital for the young republic.

Did he draw inspiration from the Parthenon or the Forum of Rome? Did he copy the plazas of Renaissance Europe? No. He chose to draw inspiration from Louis XIV’s palace at Versailles, the seat of France’s absolute monarchy. The Hunting Gardens of Versailles had been laid out with high places connected by diagonal paths. Pierre L’Enfant envisioned a “garden city,” with a layout strikingly similar to the king’s gardens. His plan was a city grid overlaid with grand diagonal avenues connecting important sites. The Capitol and the President’s House would occupy prominent places. Circles and plazas would be placed at the intersections of these avenues.

Andrew Ellicott and Benjamin Banneker laid out the initial plan on the site. While the radiating avenues might have been inspired by the “Sun King’s” gardens, the connected high places were reserved for the necessary functions of a representative republic. The result was something quite different from the design of a châteaux of France, which expressed the establishment of absolute power. L’Enfant oversaw the initial site layout, but he soon found himself in conflict with the District of Columbia commissioners. L’Enfant proved to be very difficult to work with. America’s first “rock star” architect was fired by the commissioners and George Washington.

Benjamin Banneker to the Rescue

Here the traditional story says that L’Enfant rolled up his drawings and left the country in a huff, taking his designs with him. Ellicott turned to Banneker, who had prepared the actual surveys, and Banneker is said to have redrawn the plans from memory! Though many modern historians doubt that Banneker recreated the plans, the man’s documented accomplishments proved he was capable of such a feat. In reality, the surveys and layout of the city were already well under way, and Benjamin Banneker was responsible for a great deal of the work.

An African American freeman who was a simple farmer most of his life, Banneker had the good fortune to know the Quaker settlers of Ellicott’s Mills in Maryland. The Society of Friends believed in providing education to all people, and young Banneker certainly received a solid basic education. Banneker became a student of astronomy and published an almanac. He built a working clock mechanism. It appears that he took up the craft of surveying in his 50s, looking to a time when he might be physically too old to farm. He corresponded with President Thomas Jefferson on the issue of the status of his fellow African Americans. His letter to Jefferson is well-crafted, invoking reason as well as compassion. In a 1791 letter to then Secretary of State Jefferson, Banneker builds upon the principles enshrined in the American Declaration of Independence:

“Sir I freely and Cheerfully acknowledge, that I am of the African race, … and it is under a Sense of the most profound gratitude to the Supreme Ruler of the universe, that I now confess to you, that I am not under that State of tyrannical thraldom, and inhuman captivity, to which too many of my brethren are doomed; but that I have abundantly tasted of the fruition of those blessings which proceed from that free and unequalled liberty with which you are favoured and which I hope you will willingly allow you have received from the immediate hand of that Being, from whom proceedeth every good and perfect gift.”

With Banneker’s amazing contribution to our nation’s capital, the Declaration’s phrase “All Men” was proven early in our republic’s history. Together, a Frenchman, a Quaker, and a freeman provided the surprising inspiration for the design of Washington, D.C.