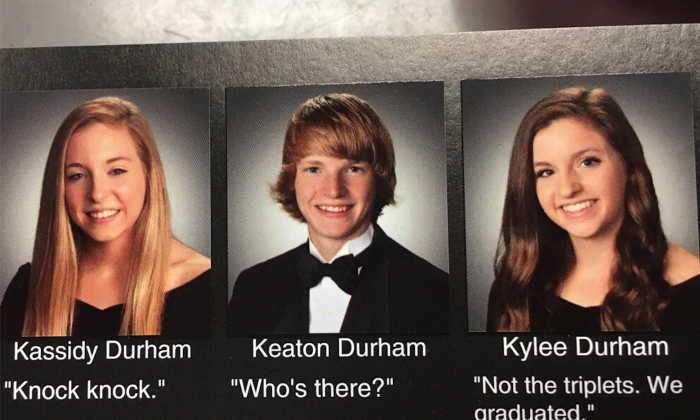 A trio of siblings decided to insert a clever joke in their yearbook, using the space allotted for personal quotes.

Kassidy, Keaton and Kylee Durham, of Fort Wort, Texas coordinated to tell a knock knock joke in the yearbook, with their quotes as “Knock knock,” “Who’s there?” and “Not the triplets. We graduated.”

“My parents thought it was a cute idea. They said it was ‘brilliant,'” Kassidy told ABC News.

The siblings didn’t keep the quotes as a surprise for their peers, but the enormous amount of attention they were getting, both on-and-offline, was unexpected.

“I think it was more of a surprise to us from how many people mentioned it on Twitter and how fast it blew up,” she said.

The siblings will spend their last day at Northwest High School on June 7, and all three will head off to the University of North Texas in the fall.