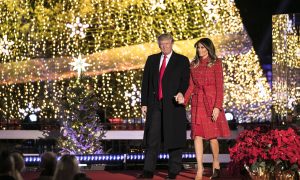 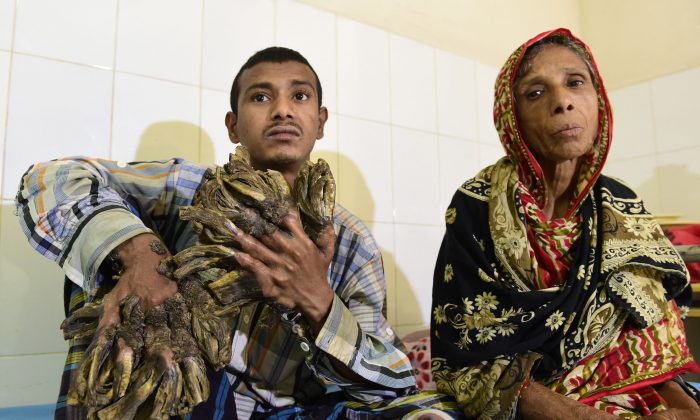 ‘Tree Man’ Is Back in Hospital and Requires More Surgery: Reports

Warning: Photos may be disturbing to some readers
By Jack Phillips
biggersmaller
Print

A Bangladeshi national who has been dubbed “tree man” is back in the hospital and requires more surgery to deal with lesions which resemble tree branches and bark that grow on his hands and feet.

Abul Bajandar, a 28-year-old father, made headlines years ago when he underwent surgery to remove the lesions.

He suffers from a rare genetic disease, epidermodysplasia verruciformis, and has lived with it for two decades, CNN reported.

On Jan. 20, he returned to the hospital after his condition worsened, reported the Dhaka Tribune and the AFP news agency.

The growths now cover the entirety of his hands and feet.

“I made a mistake by leaving the hospital. I sought alternative treatment but could not find any. I now I understand I should have stayed and continued the treatment here,” Bajandar told the Tribune.

Samanta Lal Sen, a plastic surgeon, said they would resume treatment “very soon,” saying the growths spread to other parts of his body.

“I requested Bajandar to return as soon as possible. Now we have to start from the very beginning. We’ll have to conduct more surgeries,” Sen was quoted by AFP as saying.

He lived with his wife and daughter in a hospital’s private cabin for two years while he underwent treatment, said reports.

Doctors told CNN that he’s had more than 25 operations since 2016.

“It’s a complicated case and we were making progress but he left to go home. I requested him many times to come back but he didn’t,” Sen told the network.

“He came back to the hospital on Sunday with his mother. He should have come here six months back. He came too late.”

Sen told the outlet that Bajandar noticed the lesions when he was about 10 years old before the growths encompassed his hands.

Before surgery, he couldn’ eat, drink, brush his teeth, or take a shower without assistance.

“I want to live like a normal person. I just want to be able to hold my daughter properly and hug her,” he told CNN in 2016.

Sen said that fewer than 10 people around the world have epidermodysplasia verruciformis. But in Bangladesh, Dhaka Medical College Hospital treated a woman suffering from the rare condition in 2017, according to the Tribune.

According to the U.S. National Institute of Health, epidermodysplasia verruciformis “is a rare inherited genodermatosis characterized by chronic infection with human papillomavirus (HPV) leading to polymorphous cutaneous lesions and high risk of developing non-melanoma skin cancer.”

The agency says that more than 200 cases have been reported in medical literature so far.

“Although permanent cure of EV cannot be achieved by any therapy at present, described treatment modalities include cryotherapy, topical imiquimod and 5-fluorouracil, systemic retinoids, interferon alpha, and 5-aminolevulinic acid photodynamic therapy,” it adds.

“Surgical excision is the treatment of choice for SCC. Preventive measures, in particular sun exposure avoidance and photoprotection, are crucial for proper management,” it says.