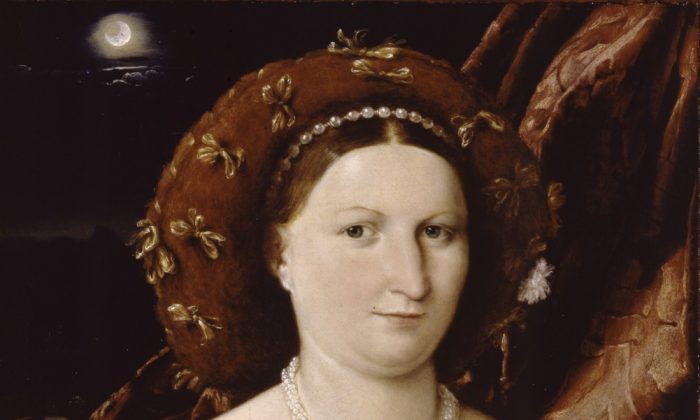 NEW YORK—In a few short weeks, 15 North Italian masterpieces currently on display at the Metropolitan Museum of Art will be returning to their home. The artworks, part of a collection representing North Italian painters of the 15th and 16th centuries, are on loan from one of Italy’s best museums, the Accademia Carrara of Bergamo, while it undergoes renovations.

The exhibit at the Met is named after the masters Giovanni Bellini, Titian, and Lorenzo Lotto, but include some works from artists such as Giovanni Cariani and Giovanni Battista Moroni, whose portraits of the upper class are no less striking in their realism than images of holy figures.

Taken together, this small collection is representative of the most influential Italian artists working in the period between 1450 and 1550. The works themselves, some depicting devotional subjects and others depicting scenes of everyday life, reflect the intersection of religious devotion and secular patronage of the arts during the Renaissance.

Some notable pieces include Lotto’s Portrait of Lucina Brembati, a warts-and-all rendering of a Bergamo noblewoman; two portraits by Moroni, one of an unidentified 29-year-old man, and another of a little girl of the Redetti family. Of the religious pieces, one of the most immediately grabbing is Bergognone’s Madonna and Child, in which the Virgin exudes the utmost look of benevolence as the infant Christ nurses at her breast.

Almost calling out the twin themes present in the collection, Moretto da Brescia’s Christ and a Devotee puts secular and religious in the same frame: the painting’s patron is depicted kneeling, lost in rapture, before Christ as he carries his cross across a barren landscape.

In another, Previtali’s Madonna and Child with Saints Paul and Agnes, the patrons, a wealthy couple, are present at the blessing of the young Christ. The commission itself is a not-so-subtle hint of the patron’s hand in devotional works.

From Lotto’s clear, robust coloring to one of Titian’s dramatic scenes of hellfire, the range of artistic styles is diverse. The exhibit itself is modest, tucked away in one of the Met’s smaller galleries, but a real gem nonetheless.

While little known outside Italy, the Carrara is a well established privately founded gallery and fine arts academy located in Bergamo, northeast of Milan. Unlike many of the best-known museums in Italy, which tend to be state-founded, the Carrara was founded by three collectors whose love for fine art and patronage became a mainstay of Bergamo’s cultural life and Northern Italy’s cultural heritage. The Carrara will reopen its doors in 2013 with new galleries.

Meanwhile, for New Yorkers seeking a slice of cultural history, the Carrara’s temporary shutdown in Italy has been an unintended boon for the city.