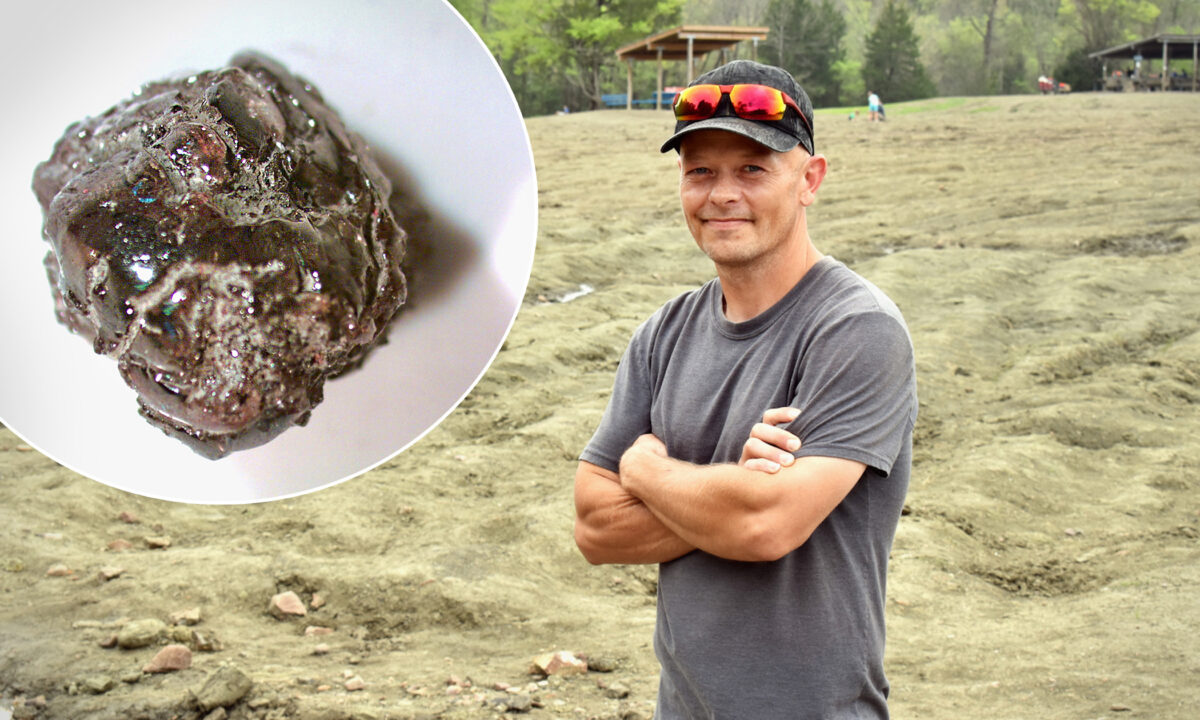 (Courtesy of ﻿The State Parks of Arkansas)
Discovery

Treasure Hunter Finds 2.38-Carat Diamond in the Dirt in Arkansas State Park After Decades of Sifting

At Crater of Diamonds State Park in Arkansas, a would-be treasure hunter “wet sifts” through pay dirt with a set of screens. Immersed in water, finer material washes away, leaving coarser rocks caught in the metal mesh. Sometimes, there are diamonds.

It was here, at the East Drain of the park’s 37.5-acre tilled soil search area, that a regular visitor, Adam Hardin, on April 10 found his first-ever diamond weighing over 2 carats. The rough-shaped, coffee bean-brown gemstone is about the size of a pinto bean, and is the largest diamond found at the park so far this year.

“It was right in the middle when I flipped my screen over,” Hardin told park officials. “When I saw it, I said, ‘Wow, that’s a big diamond!’”

He placed it in a pill bottle and carried it to the park’s Diamond Discovery Center, where staff confirmed the find, and registered it as a 2.38-carat brown diamond.

Following the state park’s tradition, Hardin named his diamond, dubbing it “Frankenstone” because of its monstrous appearance. “I thought of the name because it has a pretty and kind of not-so-pretty look to it,” Hardin said. “Us diamond miners call that ‘character!’”

He’s been digging for diamonds for over a decade, and has found hundreds of littler ones over the years. The quest for the valuable gemstones has even gotten competitive among park regulars.

“One of the other guys and I have been going back and forth, seeing who can find the biggest diamond,” Hardin said. “I found a big one, then he got a 1.79-carat, and we were joking about who would find the next big diamond and be ‘king of the mountain.’ As soon as I found this one, I had a feeling I had him beat. Now he’s trying to find a bigger one, but I’m planning on staying on top!”

Park interpreter Wayman Cox said wet sifting with a set of screens of varying mesh sizes is a common method used by visitors to quickly sort gravel by size and wash away loose dirt. When proper technique is employed, the heavier diamonds settle on the bottom of the screen; when flipped over, the sparkling stones sit on top of the pile.

“Mr. Hardin’s diamond is about the size of a pinto bean, with a coffee-brown color and a rounded shape,” Cox added. “It has a metallic shine typical of all diamonds found at the park, with a few inclusions and crevices running all along the surface.”

According to the park, Hardin typically sells his diamonds locally, and that’s what he’s planning to do this time.

Hardin’s diamond is the largest found at the park since September, when a 4.38-carat yellow gem was located on the surface of the diamond search area by a visitor from Granite Bay, California. Hardin’s Frankenstone is the largest brown diamond removed from here since the 9.07-carat Kinard Friendship Diamond was produced on Labor Day in 2020.

To date, 260 diamonds have been registered this year at Crater, totaling over 44 carats in weight. It averages 1 to 2 diamonds picked by park visitors per day. All told, over 75,000 diamonds have been found at the park since the first precious stones were discovered by John Huddleston in 1906. The farmer owned the land long before it became a state park in 1972.

The largest diamond ever found in the United States was plucked from here in 1924 during early mining operations on the land. This white diamond with a pink cast weighed 40.23 carats and was dubbed Uncle Sam. It was later cut into a 12.42-carat emerald shape and purchased by a private collector for $150,000 in 1971.